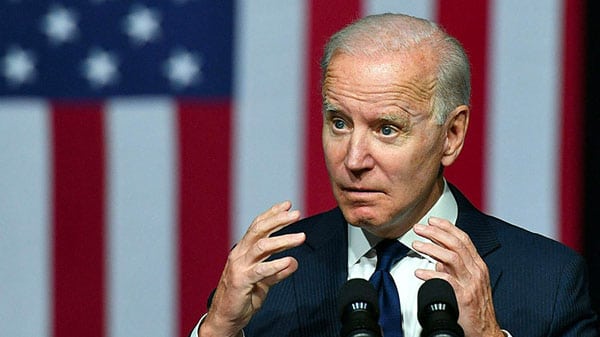 Before the coronavirus hit, President Trump could take credit for a booming economy. Indeed, for the first three years of his presidency, economic growth was strong and consistent. Businesses were feeling confident. Americans had more money in their pockets. Unemployment was historically low. All of this good economic news was going to form the central plank of the president’s reelection campaign: that he is an effective, competent chief executive who will continue to make Americans wealthier, knocking down hurdles to prosperity. It’s a tough message to counter, let alone beat in November. And then the pandemic came.

Now, of course, the country is on lockdown. The coronavirus forced government at all levels — federal, state, and local — to impose protective measures for the sake of public health. These measures also ravaged the economy, which, according to newly released data, shrank significantly in the first quarter of this year. Add a soaring unemployment rate, and President Trump can no longer tout the economy’s performance under his stewardship, even if a virus — and the Chinese government that caused its spread through cover-ups and mismanagement — is to blame for the downturn.

So, what is President Trump to do? How can he remain in the White House for another term with the economy so battered?

Fortunately for the 45th president, he has a secret weapon to help him win in November: his opponent. Shining a light on former Vice President Joe Biden, the Democrats’ presumptive presidential nominee, being, well, just himself is President Trump’s best path to reelection now that his economic argument is no longer viable. There are several reasons why this is so.

First, the president can say that he was always right about, and is willing to stand up to, China, while Biden’s record here is hardly satisfying. President Trump made his opposition to China’s exploitative economic policies and other damaging behavior quite clear during his 2016 campaign. And since his election, the president has led a shift in how America — both leaders and the public — think about Beijing. Polling shows that the American people view China more negatively than ever before, and leaders across the political spectrum feel the same way. Moreover, the Trump administration has identified China as the gravest long-term threat to American security and prosperity.

Biden, meanwhile, has downplayed the Chinese threat — “China is going to eat our lunch? Come on, man … They’re not competition for us … we can do all we need to do without punishing anybody.” Furthermore, in 2011, as vice president, Biden said that he “fully understands” China’s one-child policy, under which the Chinese government limited the number of children that families could have, before walking back his remarks. Biden also called President Trump’s decision to ban travel to and from China because of the coronavirus “xenophobic.” And don’t forget Biden’s sketchy trip to China in 2013 with his son, who was forming a Chinese private equity fund. Shanghai authorities issued the Chinese business license, which helped create the fund, 10 days after the trip — with Biden’s son a member of the board.

This election can be a referendum on China, in which case the president wins. Indeed, with China dominating so many headlines because of the coronavirus, the next several months will be the ideal time for President Trump to flaunt his credentials as a China hawk — and Biden’s credentials as an appeaser, who also has a history of being wrong about much pretty everything when it comes to foreign policy.

Second, despite the perception that Biden is fairly moderate and centrist, he will actually be the most liberal Democrat ever nominated for president. Think about it: Biden wants a public option for health insurance and is open to government-funded health care for illegal immigrants. He has also embraced key progressive initiatives, such as the Green New Deal and a $15 minimum wage. And he served for eight years as vice president under a man, Barack Obama, who in many ways governed as a far-left radical. Now Biden is moving further to the left than Obama, adopting positions to appease progressives even after effectively securing the nomination over Bernie Sanders.

Third, let’s be honest: Biden clearly isn’t all there mentally. That’s not even a joke; voters should genuinely be concerned about Biden’s mental fitness for office. Even if 77 is the new 67, Biden seems to be far more forgetful and just lost in the moment than Sanders or President Trump. Indeed, the former vice president is frequently confused during interviews and speeches. There is noticeable concern among some Democrats that Biden may not be able to endure one, let alone two, terms in the White House. Who Biden chooses as his running mate is therefore so important. But Biden has already said he is picking a vice president based on identity politics — promising a woman or a minority or both — not on merit. Amid a pandemic that requires presidential leadership, many Americans will prioritize a candidate’s fitness to lead above one’s style of leadership, even if that style can be abrasive.

Fourth, Tara Reade’s allegations that Biden sexually assaulted her while working in his Senate office in 1993 take away his moral arguments against President Trump. Beyond portraying President Trump as a threat to the republic, Democrats and their protectors in the media like to castigate him as immoral, in part because of the allegations of sexual assault leveled against him. But Biden has been accused of his share of inappropriate behavior, with Reade’s accusations topping the list. So, Biden cannot claim any moral authority in this race. Plus, watching several prominent Democrats, who always claim to believe the woman and assume the accused’s guilt, now rush to Biden’s defense reveals an obvious truth: they’ll believe the woman when it hurts “the other side,” but when doing so hurts one of their own, well, everyone’s innocent until proven guilty, right?

President Trump needs to let Biden be Biden, highlighting his numerous flaws to the American people. They’ll see someone who is questionable on China, has far-left views out of the mainstream, gets confused way too often, and is accused of sexual assault.

During a fundraiser on Thursday night, Biden apparently told those in attendance that he views himself as a “transition candidate,” someone whose job is to “bring the Mayor Petes of the world into this administration.” Does that sound like someone who wants to be elected president? This is the leader of the free world we’re talking about, with at least a four-year term, not the interim coach of a basketball team. It’s a bizarre statement — and just another indicator that President Trump’s best asset in this presidential race against Joe Biden is … Joe Biden.