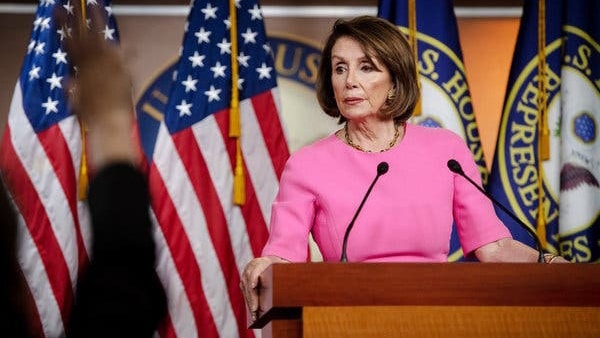 The fight which is beginning over whether to cut the payroll tax is much more than an economic or political issue.

The stunning rise in unemployment has made it dramatically clear that more stimulus will be needed if America is to get out of this virus-induced depression (it is much deeper and more painful than a recession).

The money is going to be spent. The question is: How will it be spent – and what kind of America will it help create?

The radical Democratic left knows how to spend the money to increase the power of the state and average Americans’ dependency on government. Liberals loved sending out $1,200 checks and adding $600 a month to unemployment checks.

Already Speaker Nancy Pelosi is talking about a guaranteed minimum income from the government. As Steve Moore noted to me today, she wants to pay for $2 trillion more in stimulus by canceling the trump tax cut. This would completely undermine our ability to recover from the economic damage done by the virus.

The left has a clear bias against private business and private jobs. The ideal liberal world would be government run, with bureaucrats making decisions and politicians wielding enormous power.

Conservatism has had a remarkably different view of what leads to the good life. Conservatives believe in the work ethic, maximizing the individual’s ability to be independent, and the moral importance of work and being productive.

The radical Democratic left believes having the maximum number of people on food stamps is an indicator that the system is working, and the government is generously “taking care of the disadvantaged.” Conservatives believe that helping people find work and no longer needing food stamps is a sign of progress.

If we need to spend billions of dollars to further jump start the economy, the choice will be between the Pelosi-Obama-Biden model of big government maximizing dependency and the Reagan-Trump model of encouraging work and economic growth through investment and prosperity.

Republicans who are skeptical of the power of the payroll tax cut are guilty of focusing narrowly on the short-term economic impact. In the short run, a dollar of incentive – whether in a government check or in keeping your own money – may look the same in an economic computer model.

However, the government check runs out quickly, because Prime Minister Margaret Thatcher was right when she said, “the problem with socialism is you eventually run out of other people’s money.”

The great power of a market-based system of investment and employment is that it creates more jobs and wealth. Priming the pump of free enterprise is vastly more powerful than pouring money into an ever-inflating socialist system. The first creates more wealth, economic momentum, and better lives for Americans. The second simply creates more poverty and dependency.

The difference in job creation between the Reagan-Trump pro-people programs and the Pelosi-Obama-Biden pro-government policies should settle the issue. It is not as if this is a theoretical question.

We experienced the same thing when I was Speaker of the House. We believed the welfare system was teaching dependency and trapping people in hopelessness and despair. Against bitter opposition from the left, we passed reforms which turned welfare offices into centers of employment. We adopted reforms which made it desirable to work. The result was a remarkable rise in income for the poor, the greatest reduction of childhood poverty in American history, a rise in tax income as more people worked, and a decline in welfare costs as people switched from dependent to independent lifestyles.

Further, as my associate Dave Winston of the Winston Group said, the government needs the private sector. Without private business, there are no resources available to support necessary government programs. Further, the level of support is directly tied to the vibrancy of economic activity.

So, the question of cutting the payroll tax or just sending more government checks is much more than an economic and political issue. It is a profound moral and cultural question about what kind of country we want America to become.

For starters, we should pass a program of eliminating the payroll tax for a year. We should adopt 100 percent expensing for business investment to invest in new technology, create new machinery, and build new factories.  We should index capital gains to eliminate the inflation tax. We should also create an infrastructure investment program robust and deregulated enough to make us competitive in transportation and productivity with our foreign competitors. These measures would build a program that would strengthen small business, increase the incentives for going to work, equip American workers to compete with China or any other country, and rebuild our sense of independence and self-reliance.

The American people instinctively prefer to keep their own money rather than send it to Washington and then have politicians send some of it back. This is why when asked if “in order to save and create jobs, suspending the payroll tax for the rest of the year was a good idea” Americans favored the tax cut by 67 percent to 20 percent.

President Trump captured the 3:1 majority sentiment when he said, “I want to see a payroll tax cut on both sides, a very strong one, because that’s going to really put people to work.”

It is time to reward work, incentivize job creation and increase the consumer purchasing power needed to help the economy rebound from the virus-imposed disaster of the shutdown.

The next major legislative step toward relaunching society and regaining the growing prosperity which created the lowest unemployment rates in over half a century is to cut taxes, cut regulations, and focus on productive private sector growth once again.

Any government-focused spending program will move us from the Reagan-Trump prosperity and growth model to the Pelosi-Obama-Biden slow growth, high unemployment model.

Every Republican should support this program and fight to rally the 3:1 majority to pressure Congress to pass the job creation and economic growth plan. We will recover from this virus-induced depression, but we must make sure that the people are the ones who benefit from virus recovery efforts – not the politicians.