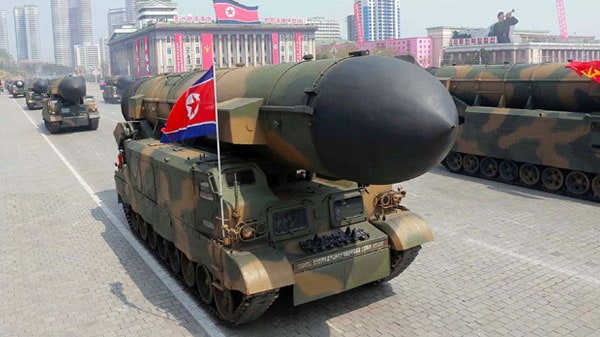 Last month, the North Korean leader was absent from public view for three weeks, prompting international speculation about his health. Kim dispelled rumors that he was brain-dead or gravely ill by appearing at the opening of a fertilizer plant.

Then, Kim inexplicably disappeared for another three weeks, sparking similar speculation that he may be incapacitated. But he appeared in North Korean state-run media this week, presiding over a major meeting of the country’s Central Military Commission (CMC).

“Set forth at the meeting were new policies for further increasing the nuclear war deterrence of the country and putting the strategic armed forces on a high alert operation,” the North’s Korean Central News Agency reported. “Taken at the meeting were crucial measures for considerably increasing the firepower strike ability of the artillery pieces of the Korean People’s Army.”

Kim also promoted nearly 70 officers involved in the regime’s nuclear and missile forces as part of an enlarged meeting of the CMC.

The gathering is the latest sign that North Korea has no intention of giving up its nuclear weapons. In fact, Pyongyang is only strengthening its nuclear forces.

In response to the meeting, President Trump’s national security adviser, Robert O’Brien, called on North Korea to abandon its nuclear program if it wants to have a “great economy.” O’Brien also said the US would “keep talking” to Kim’s regime.

The problem is that North Korea’s leaders don’t care about the economy — as long as they’re comfortable. Indeed, tyrants running prison states don’t seem to prioritize the wellbeing of their people.

Plus, North Korea continues to expand its nuclear forces, making denuclearization an increasingly difficult prospect. Pyongyang seems to use diplomacy to distract the world as it continues to strengthen its arsenal, doing just enough to give the appearance of making an effort without actually making meaningful concessions.

And now, the coronavirus has given the regime the perfect opportunity to develop its nuclear and missile forces while the world is distracted. In March, for example, North Korea test-launched more missiles than in any single month in North Korean history. And hardly anyone seemed to notice.

Furthermore, as I wrote at the time, satellite imagery and other evidence suggests that Pyongyang could be preparing for a much bigger test. Recall how Kim vowed to introduce a “new strategic weapon” at the beginning of the year. We may see such a weapon soon enough.

Even today, people seem to have forgotten that, at least in the short to medium run, North Korea poses arguably the greatest threat to the US, its interests, and its allies. (China is the great long-term strategic threat.) After all, the North has nuclear weapons, could theoretically defeat the US in war, and is ruled by a dictator who is strange and unpredictable.

No American policy has worked toward North Korea, which has destroyed literally every agreement aimed at curbing its nuclear ambitions that it has ever signed.

Recently, the Obama administration’s “strategic patience” failed, and the Trump administration’s combination of economic pressure, verbal threats, and diplomatic outreach has so far not achieved denuclearization.

We need to rethink our approach. Otherwise, North Korea will continue to increase its nuclear and missile capabilities until it poses a serious threat to the American homeland. And don’t count out the possibility of Kim, who could be in power for the next 40 years, acting on his desire to reunify the Korean peninsula under the North’s tyrannical rule.

Like America’s national debt and unfunded liabilities, the situation with North Korea may seem manageable now, but eventually it will reach a crisis. And the crisis will not turn out well for anyone.

In 2017, Michael Green and Matthew Kroenig outlined a comprehensive strategy toward North Korea that Washington should strongly consider. The strategy “combines coercive diplomacy, defense and deterrence, and reassurance of allies with the long-term goal of disarming and reunifying the peninsula.” And when it comes to coercive diplomacy, diplomacy will need to take a back seat to coercion for the time being.

In the meantime, we don’t know what new policies, if any, the North Korean regime came up with at the CMC’s meeting. But we do know that the North Koreans are advancing their nuclear weapons and ballistic missiles with each new day.

Kim must be feeling pretty good about things. Unfortunately, he’s far from brain-dead.