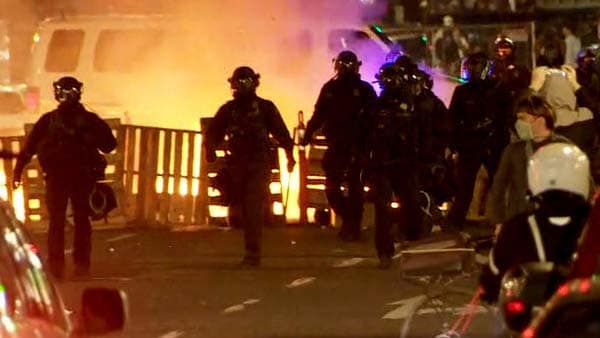 The death of George Floyd in Minneapolis is a complete outrage.

The complete failure of Minneapolis officials to stop and prevent the ensuing riot is a second outrage.

I will talk about this horrifying death in a moment, but I’ll start with the Minneapolis system’s failure.

The first rule of riots is to preempt them and stop them.

While people are rioting, the rule of law is collapsed, and street mobs dominate. Because mobs are directionless and led only by waves of emotion, hostility, and hate, every innocent person nearby is inherently in danger.

The more authority pulls back, the more the lawlessness moves in and the mob takes property, destroys property, and endangers lives.

People who had been forced to stay home by COVID-19 now might find themselves forced to stay home from fear of what might happen to them if the mob caught them in the street. And in the most violent neighborhoods, even staying in your own home is not a guarantee of safety.

Small business owners in Minneapolis, who are often Somali, Black, Hispanic, and mostly women, may find their lifetime’s work destroyed by a vengeful, hateful mob.

The first duty of government is to provide physical security.

The city of Minneapolis failed to protect its citizens.

The state of Minnesota failed to protect its citizens.

Now, the President of the United States is threatening to intervene with federal forces as President Lyndon Johnson did in Detroit in 1967 and President George H W Bush did in Los Angeles in 1992.

Unfortunately, the tragedy unfolding in Minneapolis is one we have seen again and again.

A significant part of the Black community rightly feels abandoned and alienated. Liberalism has cheated them in virtually every aspect of their lives. Trapped in a political system controlled by bureaucratic unions, interest groups dependent on or regulated by government, and left-wing activists, there is both a sense of hopelessness and a feeling of constant anger which can exploded into rage.

In Minneapolis, the teachers’ union traps poor children in schools which fail to educate them. This makes it hard to get a decent job. High taxes and layers of self-serving, unaccountable bureaucrats make it hard to create small businesses.

Faced with high unemployment, few property owners, even fewer business owners, and no one to mentor young people in how to succeed, there is a depth of bitterness and despair. The liberals who dominate Minnesota and Minneapolis elections have a series of beliefs that simply don’t work. They hire too few police, train them too little, and offer them no support. Meanwhile, there are countless studies that show if you want to reduce use of force incidents, you fund police and ensure they are well-trained.

Much of the Black community sees the police as an occupying force. Liberals spew hatred of the police. Meanwhile. much of the police force sees itself as trying to protect people who it knows dislike – and in many cases despise – it.

The video of the killing of George Floyd was horrifying to see. Anyone who saw it who had an ounce of compassion had to have been deeply enraged. The minute the film went viral, officials should have moved decisively to establish control.

1. They should have found a plausible reason to keep the policeman detained pending investigation. The videos from multiple directions provide overwhelming proof that something horrendous happened, and it would enrage people.

2. They should have announced immediately and firmly that no violence or destructiveness would be tolerated. Peaceful demonstrations should have been accepted and encouraged.

3. They should have immediately mobilized enough National Guard to retain control of the street. The liberals on the Minneapolis City Council had so weakened the police department that it should have been obvious the police could not maintain control. Furthermore, the police were going to be the focus of community anger, so asking the police to be the line between civilization and barbarism was inviting a disaster.

4. The minute the crowd began to build around the police station, the National Guard should have been sent in to flood the streets with the forces of law and order (the classic British principle for controlling riots in Hong Kong).

5. If necessary, the Minnesota state police should have been assigned to work as partners with the Minneapolis police in arresting anyone who broke the law.

Instead of these tried and true principles for controlling a crisis, the elected officials reacted in exactly the wrong way.

They enraged the crowd by announcing they were not ready to restrain the policeman seen kneeling on George Floyd’s neck (he has since been charged with murder). They sounded weak and uncertain, giving the mob the impression its violence would be tolerated and condoned.

The Minneapolis police, after years of budget cuts, training cuts, vilification by elected officials and activists, decided it wasn’t their fight and began to empty the precinct station because they saw no reason to risk their lives for a political system which held them in contempt.

There is every reason to be angry about what happened to George Floyd and to demand justice.

There is no reason to allow a mob to take over Minneapolis.

Tragically, this is a glimpse of much deeper roots of tragedy and failure in many American cities.