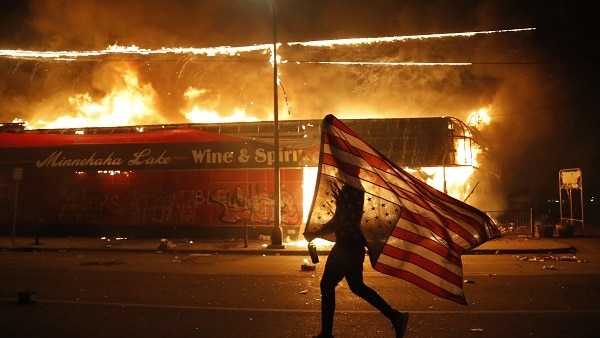 The news media wants to ignore the depth of the violence and the forces causing the violence and simply rerun their permanent refrain that this is all about racism (see the Washington Post story that “Racial inequality in Minneapolis is Among the Worst in the Nation” as an example).

The news media will resist deeply the idea that Antifa is a factor and that the violence is designed to hurt America.

For America to succeed, we must win this argument.

What we are witnessing is part of a continuing war against America.

First, demonstrators have every right to peacefully protest the killing of George Floyd. His killing was horrifying, and the policemen involved will have to stand trial for his death.

However, people engaged in violence are not demonstrators – and given the scale of their violence and destruction, they are not just angry people expressing their frustration. The scale of violence and the number of cities being attacked is a war against America.

If we saw this level of violence by an attack from ISIS or Al Qaeda, we would understand that we are engaged in an act of war. This is an act of civil war, and the enemies of American civilization have to be defeated decisively and permanently.

Furthermore, every American of every political belief must be protected by the government against this kind of violence and destruction. We need a decisive engagement to enforce safety on the streets, and then we need a deep commitment to track down the funders, organizers, and activists who fomented violence against America.

Every person will have to choose between defending America and defending those who would destroy America.

Andrew McCarthy captured it when he wrote: “Anti-America must be made to understand that America has had enough.”

McCarthy noted that the federal government has had the power to step in against insurrection and sedition since, “the Insurrection Act of 1807, which empowers the president ‘to suppress, in any State, any insurrection, domestic violence, unlawful combination, or conspiracy.’” That Insurrection Act was strengthened during the Civil War and again after 9/11.

Mark Halperin captured the depth of this war against America today when he wrote in his newsletter:

“About the biggest mistake we can make is to think that what is happening now represents the outbreak of America’s Second Civil War. This is in fact simply the bloodiest battle to date in a long-running, existential conflict.”

Halperin is right about the present but wrong about its size compared to past attacks on America. The battles from 1967-1972 were much bigger and more savage than anything we have seen so far.

In an 18-month period in 1971 to 1972, there were an estimated 2,500 bombings, according to the Federal Bureau of Investigation. The anti-Americans of that era were only defeated by the systematic application of the FBI and other organizations dedicated to defending civilization against its enemies.

Now we face a similar challenge in a somewhat different form. Here are some questions and suggestions for dealing with the current generation of violent anti-Americans.

1. What are all the organizations involved in advocating violence? Antifa is the top of a network of activist groups engaged in sedition, but there are a lot of other seemingly random groups.

2. Who is funding all this activity? Antifa has a real network. We know the Soviets funded the peace movement in the 1980s and the terrorist groups in Western Europe in the 1970s and 1980s. What online efforts and other activities are our foreign opponents using to help spread and sustain the internal war against America? What about those on the left who believe Antifa is innocent? Minnesota Attorney General Keith Ellison’s son, who is a Minneapolis city councilman, just endorsed Antifa in response to President Trump declaring it a terrorist organization. He said white supremacists were causing all the trouble – that charge must be totally explored.

3. Given the sheer volume of video and other photographs, it should be possible to hunt down a wide number of the people who committed acts of violence. They should be arrested and prosecuted to the fullest extent of the law.

4. During a period of mass violence, there should be no bail allowed for those arrested for participating in the violence. The first goal is to dry up the number of people who are committed to violence. Arresting and releasing them actually increases the confidence of the violent offenders, because it leads them to believe they can get away with it.

5. Every decision must have a public information component at its core. It is impossible to understand how Minneapolis could have allowed a police station to be abandoned. How did officials not understand it would be a signal to the anti-Americans that they were winning and the defenders of civilization were losing their nerve.

6. Since the government failed to protect the innocent and their property, there should be an immediate announcement that damage from the terrorists will be treated as a national emergency comparable to a hurricane, earthquake, forest fire, or flood. The Federal Emergency Management Agency should immediately move to help reopen stores, rebuild homes, and reestablish community buildings. With many small businesses already weakened by the COVID-driven shutdown, they simply don’t have the resources to rebuild. If entire neighborhoods collapse with no stores and no jobs, then the anti-Americans will have planted the seeds for even more disillusioned people to join their movement.

7. When faced with a threatened anti-American mob with a high potential for violence and property destruction, the streets should be flooded with the forces of civilization. If on the first night, the city of Minneapolis and the state of Minnesota had fielded the 13,000-member National Guard there would have been no violence. When you don’t know how effective, prepared, or numerous your enemy may be, you take your best guess about how much force you will need – and then multiply by three to five, so you can overwhelm the opposition.

8. Massive strength leads to the smallest loss of life and the least property damage. It also discourages others from joining the violent faction. It is astonishing that people have been violent with impunity in New York City, Washington DC, Atlanta, and elsewhere without being met with overwhelming force. If the city can’t cope, the state has to step in. If the state can’t cope, the federal government has to step in. Every day this violence continues further weakens America at home and around the world.

9. Modern technologies must be brought to bear. Because these are acts of violence against our civilization and are being classed as terrorism, there ought to be an ability to track cell phones belonging to radical elements and see how many of them have crossed state lines and moved from violent outburst to violent outburst.

Much more must be done to communicate the scale of the violence that is occurring. Local media is vivid but national media simply isn’t capable of gathering and organizing the information. An important step is to have a briefing in which the secretary of homeland security or someone comparable simply outlines city-by-city how much damage the anti-American effort has caused in less than a week.

This is only part of what it’s going to take to stop the destruction.