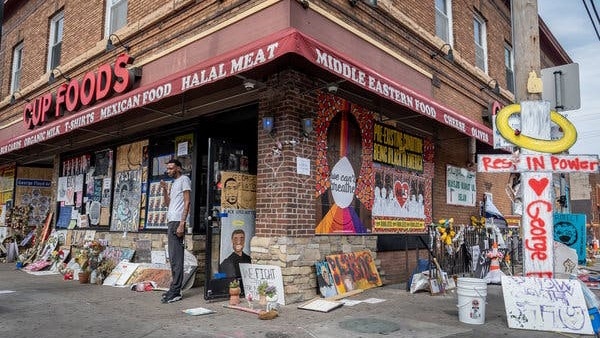 Anti-Israel activists are blaming the Jewish state for George Floyd’s death, invoking antisemitic conspiracy theories to make their cases. Of course, the whole notion is absurd: Floyd, a 46-year-old African American man, died last week because a white Minneapolis police officer pressed his knee into Floyd’s neck for nearly nine minutes while arresting him. Israel — a foreign country the size of New Jersey, located more than 6,000 miles away — obviously had nothing to do with the killing. The officer was charged with third-degree murder and second-degree manslaughter.

Yet Israel’s enemies — a group that includes comedians, staff writers for the New Yorker, and so-called human rights organizations — aren’t letting facts and logic get in their way. They’re using Floyd’s death and the subsequent riots that it triggered nationwide to demonize Israel and even to vandalize synagogues.

It didn’t take long for the Democratic Socialists of America’s (DSA) national working group for members involved in the Boycott, Divestment, and Sanctions movement against Israel to tie the Jewish state to Floyd’s death.

“The police violence happening tonight in Minneapolis is straight out of the IDF [Israel Defense Forces] playbook,” the group tweeted. “US cops train in Israel.”

“The racist and brutal tactics used by Israeli military and US cops are purposefully one and the same,” the DSA added, providing no evidence. “So-called ‘less lethal’ weapons like tear gas are manufactured in the US and sold to Israel where they are tested and used on Palestinians.”

The group went on to allege — again without evidence — that surveillance technology made in Israel is brought to the US “to invade the privacy of Black, brown, Muslim, poor, and otherwise marginalized people.”

“This is the ‘special relationship’ between Israel and the United States,” the DSA concluded.

Remember, Rep. Alexandria Ocasio-Cortez (D., N.Y.), the symbolic future of the Democratic Party, is a member of the DSA, which openly embraced her. This is no longer some fringe group to be ignored as irrelevant.

As The Algemeiner recently noted, the group’s statements are part of an ongoing campaign called “Deadly Exchange,” which blames Israel for allegedly racist police tactics in the US.

The DSA is hardly alone. Comedian Jimmy Dore, New Yorker staff writer Naomi Fry, and the US Campaign for Palestinian Rights are among the many figures in mainstream entertainment, media, and advocacy that are similarly portraying Israel as the real villain in Floyd’s death.

Activists in the anti-Israel movement have also circulated antisemitic cartoons online following Floyd’s death. One such cartoon shows, under the words “Black Lives Matter,” a white American police officer and an Israeli soldier putting their arms around each other, each pressing their knee into a seemingly dead or unconscious victim — the former targeting a black man, and the latter targeting a Palestinian.

Such claims about and depictions of the Jewish state are modern-day examples of the classic blood libel, according to which Jews murder Christian children and use their blood for religious rituals. Today, the blood libel is that Israelis wantonly murder Palestinians and spread their murderous methods to other monsters around the world.

It is painfully obvious that these anti-Israel activists are engaging in antisemitism.

Bernard Lewis, the late and preeminent historian of the Middle East, argued that the “accusation of cosmic, satanic evil attributed to Jews,” the likes of which cannot be found anywhere else, is the key, distinguishing factor of antisemitism. In practice, this means holding Jews responsible for all the world’s ills, imagining them as puppet masters controlling the globe as they see fit. This conspiracy theory underpins most antisemitic behavior, and such blame often leads to demonizing Jews.

If none of the above is convincing, then consider how a synagogue in Los Angeles was vandalized on Saturday with graffiti stating “free Palestine” and “f**k Israel.”

The graffiti appeared as riots and protests continued to erupt in Los Angeles and across the country following Floyd’s death.

Lisa Daftari, founder and editor of the news outlet The Foreign Desk, first reported on the vandalism.

“Synagogue Congregation Beth El on Beverly Blvd in Los Angeles vandalized … Tell me this ugly hatred is still about #blm or #georgefloyd?!” she tweeted.

Congregation Beth Israel is one of the oldest synagogues in Los Angeles.

If the pro-Palestinian, anti-Israel movement has nothing to do with antisemitism, then why deface a Jewish place of worship? Rioters also vandalized Jewish-owned businesses, including kosher shops, with pro-Palestinian messages.

That Israel’s enemies have used Floyd’s death and the riots as cover to attack the Jewish state and Jewish institutions is shameful. They clearly don’t care about what happened in Minneapolis and are exploiting it to spread antisemitic poison.

The bigger point, however, is that these anti-Israel forces are connecting their cause to the Black Lives Matter movement and other far-left causes through intersectionality — the idea that supposedly oppressed peoples of color or indigenous populations share common cause against the forces that oppress them.

As the Democratic Party moves further to the left and the likes of Ocasio-Cortez gain more influence, this intersectional thinking will only become more pervasive and entrenched. That means more antisemitism and more riots. In other words, what we’re seeing now may only be the beginning if the radicals have their way.