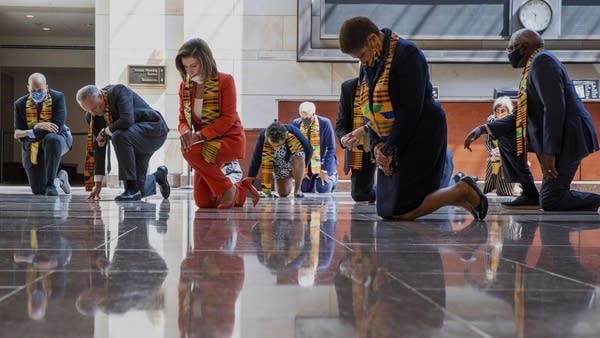 In my new book Trump and the American Future, I outline the radicalism of the Democratic Party – especially in the United State House of Representatives.

This analysis was driven home when I saw the picture of Speaker Nancy Pelosi and other Democratic members of the House and Senate kneeling in symbolic submission to radical left’s anti-police agenda. I was appalled.

My initial reaction was the same as Georgia State Trooper O’Neal Saddler, who as the Washington Examiner reported: “was recorded telling protesters in Hartwell that he only kneels ‘for one person: God.’”

“I was supposed to be out of town this weekend with my wife. I took off today, this weekend, but I’m out here to make sure y’all are safe. … I have much respect, but I only kneel for one person, and that’s God.”

Trooper Saddler is an African American, which made his refusal even more striking.

In the spirit of New Hampshire’s state slogan, “live free or die,” and in recognition of an American tradition of stiff-necked pride and independence, my initial reaction was that the whole Democratic Party exercise was absurd.

But then I was reminded again that the Democrats should apologize – to all of us.

After all, it is Democratic control of cities which has turned many of them into disasters. While the Democrats want to blame President Trump, let’s look at the facts about which party has crippled America’s cities.

Let’s start with Minneapolis, where the New York Post reported that during the officially peaceful and nonviolent protests:

“At least 220 buildings have been set ablaze since Floyd was killed by police officers on Memorial Day and the city plans to look for outside aid to rebuild after the civil unrest.

“Minneapolis Mayor Jacob Frey will ask for state and federal funding to help repair the city, though the cost of damage could rise as protests continue through the Twin Cities and across the country.

“’We’re going to need a really big package,’ Frey said during a tour of the wreckage.”

So, having failed to protect their city – and after the media lectured the rest of us that we were not to discuss or even mention violence (note the Philadelphia Inquirer’s editor was pushed out for allowing the headline “Buildings Matter Too”) – we are now being told the rest of us should send the radical leftist Democratic mayor and city council roughly $55 million for damage they said had not been done by violent anarchists we were told did not exist.

Meanwhile the radical leftist Democrats on the Minneapolis City Council want to replace the police department. Why should the rest of us pay for their madness?

If you have any doubt about the Democrats’ responsibility for the bad conditions in Minneapolis, consider that the last GOP mayor to serve a full term left office in 1961. So, for 59 years, Democrats have dominated the city they want us to pay for while refusing to reform their institutions that are failing.

Speaker Pelosi has ties to two cities which have been crippled by Democrats.

Her father and brother were mayors in Baltimore. Baltimore’s last Republican mayor left office in 1967. There have been nine Democratic mayors in a row for 53 years. Baltimore now spends $16,000 per student in its school system (the fourth highest spending city in the country), yet the system is failing to teach. Student proficiency scores are near the bottom of the country.

Speaker Pelosi represents San Francisco, a city whose last Republican mayor left office in 1964. For 56 years there has been an uninterrupted stream of 11 Democratic mayors of Pelosi’s hometown. The city has done such a horrible job of dealing with drug addiction and homelessness, it had to start a “poop patrol” to regularly clean human feces off its sidewalks.

The greatest disaster over the weekend was in Chicago. While the police were drawn off watching the protests, much of the city was unguarded. The Chicago Sun Times reported 18 killings in 24 hours, the most violent day in 60 years.

Chicago provided a real test for defunding the police, and it was devastating for 18 people, their families, their loved ones, and every Chicagoan who wants to live in real peace.

Of course, Chicago has been solidly Democratic in city government since 1931. For 89 years Democrats have owned the mayor’s office. Democrats in Chicago should take a knee and ask for forgiveness from the people they have failed in every aspect of life.

Democrats who oppose the police and want to defund them are going to bring about a massive increase in crime. Their local policies have already had horrendous consequences.

As The Wall Street Journal editorial board documented:

“Take New York City’s new bail law that gives nonviolent offenders a get-out-of-jail-free card. In January a man who stuck up six banks in two weekswas repeatedly released after each arrest. ‘I can’t believe they let me out,’ he told a detective. …

“Even before the recent riots, crime had been surging this year in many of America’s big cities. In Minneapolis, car-jackings were up 45%, homicides 60%, arson 58% and burglaries 28% from January through May 30 compared to the same period last year. Violent crime overall was 16% higher and property crime 20% higher than recent low points in 2018.

“In New York City, shootings had increased 18%, burglaries 31% and car-jackings 64%. There were about 1,279 more burglaries, 1,078 more cars stolen and 57 more shooting victims during the first five months of this year than during the same period last year. Almost all of these were outside of Manhattan’s business district.

“In San Francisco, homicides before the riots this year had increased by 19%, burglaries by 23% and arson by 39% over last. Philadelphia reported a 28% increase in commercial burglaries, 51% in shootings, 22% in auto theft and 28% in retail theft from last year.”

It is time for Americans to take back their cities from the failed policies and institutions of the Democratic Party.

It is also time to win the argument that Democrats who have controlled our cities for 59, 53, 56, and 89 years are a lot more responsible for the terrible conditions in these cities than the first three years of a Trump administration, which created jobs and opportunity for Americans everywhere.

So, the next time you see Democrats take a knee, thank them for apologizing for the disasters they have created.