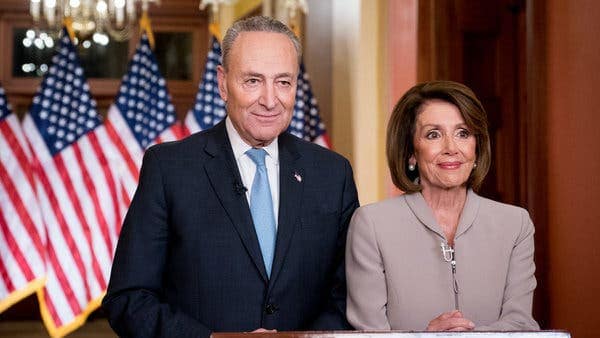 Every time some supposed conservative or Republican explains why he or she can’t be for President Trump, I wonder if they have thought about the alternative — the Biden-Schumer-Pelosi machine.

If Biden wins, it means the turnout will be such that Pelosi remains speaker, and the Democrats will almost certainly gain control of the Senate.

Given control of all three instruments of power, what will the Biden-Schumer-Pelosi team do?

This is not a question which requires wild speculation. As I outlined in a series of podcasts at Gingrich 360, the Pelosi $3 trillion bill by itself contains enough radicalism to be terrifying. It would legalize all people currently in the country illegally. It would block federal immigration officers from deporting even criminals and gang members. It would give major Democratic donors a huge tax break by reestablishing unlimited deductibility for state and local taxes. It would pay for abortion with taxpayer money. It would release prisoners indiscriminately, so that at least six of the most infamous serial killers would be eligible for release. It would pour money into corrupt local governments and bail out the most wasteful states in America. These are just some examples from the bills more than 1,800 pages.

And there are plenty more examples. In my upcoming book Trump and the American Future, I detail a host of radical votes and actions which were supported by more than 200 currently serving House Democrats.

Beyond this, we have solid evidence from California, New York, and Virginia of how radical the Democrats will be if they control the House, Senate, and White House. Abortions – even after a baby is born – will be legalized and paid for with your tax money. Gun control will be effectively imposed by establishing manufacturer and gun seller liability for any gun used in a crime. (Trial lawyers would love it, and they are at the heart of the Democratic coalition.)

With HR1 (the first bill voted on this session) and the elections component of the Pelosi $3 trillion bill, it is clear how the Democrats will move to make themselves unbeatable. They have been frustrated by free elections. Even when they could win the presidency, they only had unified power for two years at a time under Clinton and Obama. In both cases, they immediately lost the first off-year elections and then had to contend with Republican Houses.

That off-year victory led Clinton to compromise on welfare reform, balancing the budget, reforming the Food and Drug Administration and Federal Communications Commission, and cutting the capital gains tax. Liberals hated it and have never forgiven President Clinton for going to the center. President Obama was much more radical than President Clinton and had learned that the left would punish you for “selling out.” His answer to Republican opposition was to accept limited legislative goals and try to change America through executive orders and radical appointees.

The current Democratic goal is to create a one-party government – as Democrats have in Chicago (the last Republican mayor served 89 years ago), New York (where Governor Cuomo dominates), and in California. Their election law changes will make it impossible to identify who is voting or have accurate voter rolls. It will set the stage for vote harvesting on a nationwide scale. All of this is clear from HR1 and the Pelosi Bill’s provisions.

Faced with the Trump administration’s extraordinary success in appointing more than 300 federal judges, the Biden-Schumer-Pelosi team will almost certainly invent hundreds of new federal judgeships, so they can fill them with radicals who will replace constitutional limits with politically correct rules. Unless Chief Justice John Roberts follows the election with a decisive shift to the left (certainly conceivable given some of his 5-4 votes with the liberal justices) it is likely the Biden-Schumer-Pelosi team will create four more seats for the US Supreme Court.

Trump’s remarkable wave of deregulation will be reversed by Elizabeth Warren proteges appointed in every bureaucracy. Freedom will again be replaced with the rule of Washington.

The economic recovery will come to an abrupt halt as the wave of red tape is matched by massive tax increases on investors and American business. Meanwhile, small businesses will simply drown. The unemployment rate will remain much higher than it would in a Trump administration, and the left’s efforts to create a society in which the largest possible number of Americans is dependent on government for money, food, housing, and daily life will grow even bolder.

Police (if they survive at all) will face dramatically limited funds, draconian anti-police regulations, and a profound number of criminals on the street via the elimination of bail. In one recent case in New York, a serial bank robber was arrested six times for robbing banks and released every time without bail. After the sixth arrest, he told a detective he couldn’t believe they kept letting him out.

Sympathy for Seattle-style “free zones” of Antifa-led takeovers and secessionist movements will become the norm. In these areas, theft-based economies and might-makes-right will replace the rule of law.

American history will continue to be rewritten, and a major effort will be made to establish reparations for African Americans who were never slaves to be paid by people who were never slaveowners. These payers would include the descendants of immigrants who came after the end of slavery.

In foreign policy, the Biden-Schumer-Pelosi team will revert immediately to a more leftwing version of Obama’s policies. The Iran agreement will be renewed. The United States will rejoin the Paris Accord on Climate Change — and will meet its full funding obligation to the World Health Organization. Israel will be pressured to give up its new settlements and to find a deal with Hamas or face dramatic cuts in support from the United States. The Biden administration will seek a new understanding with China, including the acceptance of the Hong Kong takeover and abysmal human rights abuses against Uyghurs in Xinjiang, a withdrawal from challenging China in the South China Sea, and a signal that pro-Chinese government appointees will be made to key positions at the National Security Council, State Department, and Commerce Department.

None of these examples are partisan exaggerations. They can all be found in bills, speeches, and articles by leading Democrats.

The next time someone suggests President Trump should not be re-elected, ask them if they have thought through what life will be like under a Biden-Schumer-Pelosi machine.