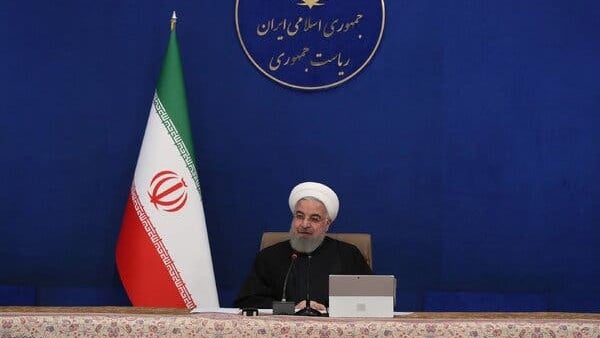 Foreign policy usually comes down to a choice between bad and worse — or, at least bad and less bad, for those optimists out there. I know, it’s not exactly inspiring — but it’s the truth. The lesser evil may cause contention, even conflict, but ultimately it will be less destructive than the alternative. Such is the case with America’s effort to stop Iran from obtaining nuclear weapons.

In the other report, the IAEA “notes with serious concern that, for over four months, Iran has denied access to” two sites in the country and, for almost a year, has failed to clarify the agency’s “questions related to the possible undeclared nuclear material and nuclear-related activities.” The IAEA added that Iran’s intransigence has hurt the agency’s ability “to provide credible assurance of the absence of undeclared nuclear material and activities at these locations in Iran.”

Naturally, plenty of people, especially those who support the nuclear deal with Iran, will blame President Trump for these latest developments — as they do for any instance of Iranian aggression these days. After all, President Trump withdrew the US from the deal and has waged a campaign of maximum economic pressure against Iran. Such provocations, the argument goes, led Iran to ramp up its nuclear activities in violation of the deal.

This argument is misguided and misreading the situation.

Iran has a history of stonewalling international inspectors and scrubbing or destroying nuclear facilities that dates back years. One of the IAEA’s new reports discusses, for example, an Iranian location that was razed in 2003 and 2004 and experienced such “extensive sanitization and leveling” as to render a visit of “no verification value.” Of course, the IAEA is left wondering where the equipment and undeclared nuclear material from the site are today, not to mention whether Iran is continuing today whatever activities it was doing at the site back then.

Such secrecy and deception follow a pattern. Take the cache of some 100,000 Iranian files that Israel snatched from Tehran in 2018. The files, which Iran had moved and hidden away in a secret warehouse, contained detailed plans to build nuclear bombs, among other illicit nuclear activities. Iran kept this information after it “reaffirmed,” to quote the nuclear deal, “that under no circumstances will [it] ever seek, develop, or acquire any nuclear weapons.” Why would a bank robber who promised to quit still have blueprints of banks stashed away in his basement?

The Iranians are clearly hiding nuclear facilities and material. And it seems quite clear that Tehran’s plan for the nuclear deal was to secure relief from sanctions, reaping the economic benefits, while maintaining the capability to produce nuclear weapons. In other words, it sought to have cake and eat it, too. This was all evident in 2015, and the latest evidence from the IAEA further proves the case.

Still, even if Iran was going to lie and cheat regardless of how President Trump handled the nuclear deal, there’s no question that Iran and the US are now heading toward a crisis over the former’s nuclear program. At some point in the coming years, perhaps when someone else is in the White House, the Iranian nuclear program will become advanced enough that someone — Israel and/or America — will need to take drastic measures, perhaps military strikes, to delay Iran’s march toward the bomb. Otherwise, the Islamist regime will get nuclear weapons, and the world will be forever more dangerous. (The one caveat is the unlikely possibility that the regime collapses before then.) Iran’s recent nuclear advances and America’s tough rhetoric and sanctions indicate we are heading to that point in a hurry.

While that forecast may align with the alarmist warnings of President Trump’s critics about a coming clash with Iran, the US should actually welcome this current trajectory. The reason why is simple: This was already coming, so better to face it sooner when Iran is weaker.

The main problem with the nuclear deal is that the key restrictions on Iran’s nuclear program expire over the next 11 years (from now), thus paving, rather than blocking, the regime’s path toward nuclear weapons.

Under the deal, beginning in 2026, Tehran is free to enrich uranium using advanced, far more efficient centrifuges and to install and operate more of its older models. Then, in 2031, restrictions on the amount and level of enriched uranium that Iran can stockpile disappear. So, if Iran abides by the deal to the letter — put aside the fact that Iran is cheating — it will be free, in about a decade, to build as large a nuclear program as it wants.

Let’s imagine for a moment that President Trump never left the nuclear deal and that Iran didn’t violate these restrictions so publicly. Iran would be building an industrial-scale nuclear program, getting rich from much fewer sanctions, and advancing its ballistic missiles and conventional arms with the international community’s blessing. Tehran would have less and less incentive to strike another nuclear deal when the current one expires, and the US would lose much negotiating leverage. Of course, Iran’s regime would be just as brutal, cruel, and dishonest as it is now, looking ultimately to have nuclear weapons.

In short, the US and Iran would still reach the aforementioned crisis, but at a later date, when Iran is much stronger and a more formidable foe.

So, the crisis would come regardless. But by withdrawing from the deal and re-imposing sanctions on Iran, the Trump administration has forced the issue and accelerated the process. The result is not pretty — in fact, it’s quite messy. But it is far superior to the alternative, because the US is in a position to confront Iran when the regime is much weaker, and Washington has greater leverage.

We are now dealing with the lesser of two evils, the better of two bad options. There were certainly better, more strategic ways for the US to withdraw from the nuclear deal that wouldn’t have alienated Europe to such a degree. But, again, it’s much better to ditch the deal and face an Iranian nuclear crisis sooner than stick with the deal and face a worse crisis later.

The latest reports from the IAEA show that Iran is plotting nefariously, but Iran would be doing so regardless of Washington’s actions. The reports also show that a crisis over Iran’s nuclear program is foreseeable, but that was always the case. Ironically, in other words, current tensions show why President Trump was right to leave the nuclear deal.