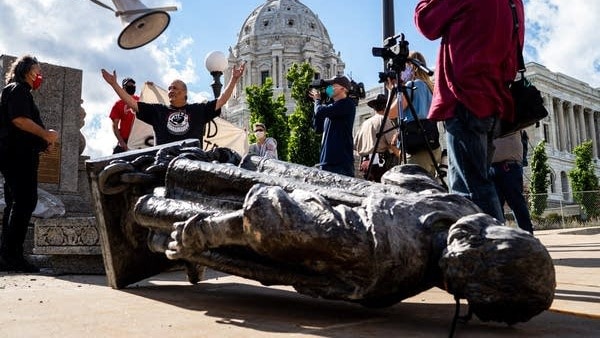 There’s a brief scene in Schindler’s List, Steven Spielberg’s classic film about the Holocaust, when Nazi officer Amon Göth (played by Ralph Fiennes) speaks to his troops before they liquidate the Kraków Ghetto in Poland. Standing before his men, Göth explains that, 600 years ago, Jews came to Kraków with nothing but managed to prosper in all areas — business, science, education, the arts. “For six centuries, there has been a Jewish Kraków,” Göth says. “By this evening, those six centuries are a rumor. They never happened. Today is history.”

I can’t help but think of Göth’s words as I watch the rioting and looting that has erupted across the country — and western Europe — since the killing of George Floyd. Of course, the left-wing radicals who are hijacking peaceful protests and perpetuating the violent chaos are not Nazis. No one is trying to commit genocide, and the current unrest can’t compare to the liquidation of the Kraków Ghetto. But the radicals destroying lives and property in the streets today do seem to want to erase history in the same manner that Göth described. They just have a different target.

Over the past couple of weeks, protesters and rioters have demolished statues and other historical monuments across America and Europe. They removed Confederate monuments, beheaded and pulled down statues of Christopher Columbus, toppled statues of Thomas Jefferson (while spray painting “slave owner” on the base), and vandalized statues of Winston Churchill. Now, there’s a petition circulating to tear down a statue of Abraham Lincoln in Boston, and the mayor is, according to reports, open to the idea. The list could go on.

The progressive mob is trying to uproot from Western history those who it deems to be racist or involved in some form of oppression, especially colonialism and imperialism. There’s no effort at nuance or sophistication — to recognize, for example, that the Confederate cause was terribly wrong but also a critical chapter of American history that shouldn’t be discarded or forgotten. And, sure, Columbus was hardly a saint, but he also made contact with the Americas and is worth preserving. Jefferson did own slaves, but he also wrote the Declaration of Independence, a truly immortal document that changed the course of history across the world. Churchill was a flawed human being, as we all are, but he also was history’s greatest anti-fascist (sorry, Antifa). Finally, Lincoln was called the “Great Emancipator” for a reason.

In the minds of the woke, hard left, you are either an enemy or a friend, an agent of oppression or a warrior for social justice. There is no compromise or empathy, and certainly no room for subtlety. Such is the thinking of authoritarian rulers, who don’t tolerate dissent. As I wrote last week, “The progressive left advocates tolerance — just not for those who have opposing views.” Unfortunately, many Democrats and the media aren’t calling out their more radical colleagues for being authoritarians.

Watching mobs vandalize and demolish historical statutes with such anger and ferocity, it’s clear they don’t just want to remove a physical object. They want to remove any trace of the historical figure’s memory from existence and begin anew. In their terms, they are moving on from the oppressive past toward a just future. This is the heart of progressivism.

If that sounds creepy, chilling, and authoritarian, that’s because it is. The radicals want to wash away the stains of American and European history from our collective memory. Yet, erasing history is not what free, democratic societies do. French President Emmanuel Macron made this point well on Sunday. After stating unequivocally that France will do all it can to promote equal opportunity and confront racism and discrimination, Macron said this “noble fight” is “perverted” when it becomes a “false rewriting of history.”

“The republic will not erase any trace or name from its history,” Macron continued. “It will not forget any of its deeds or take down any statue. What we need to do is to look all together with lucidity on all of our history and all of our memory.”

He went on to emphasize France’s troubled history with Africa as one area where Paris should not shy away from the past while building a relationship across the Mediterranean for the future.

Macron is absolutely correct. We need to embrace our history and confront and learn from the parts that are terrible. As a practical matter, we learn from history to try to avoid the mistakes of the past and emulate what worked. But history also defines a nation. As Henry Kissinger said, “History is to states what character is to individuals.” If we get rid of history, we lose all that makes our nation a nation. And then where does that leave us?

But here lies the real problem: Progressives believe America and Europe — in fact, Western civilization as a whole — are fundamentally flawed, built on racism, colonialism, and other forms of oppression. Where most people see a basic story of liberty and prosperity, they see a story of quite the opposite. This is not only the view of Antifa and extremist members of the Black Lives Matter movement who have been rioting and looting. No, this negative view of the West is the core of progressive ideology — the foundation on which so many far-left policy ideas are based.

The great irony is, at least in the US, the answer for how to proceed from here toward a more just future comes from the past. I’m referring to our founding principles and the documents that articulated them — the Constitution and the Declaration of Independence. Our shameful history of racism, especially against African Americans, stems from failing to adhere to the principles outlined in these documents, which venerate liberty and equal opportunity. The key is to return to the basics of Western civilization, not toss them aside as obstacles on the road to progress.

The far-left rioters don’t see it this way, however. In their perfect world, America and Western civilization would one day become a rumor, some horrible episode in history that never happened. Of course, things would be far more oppressive than they ever were in the US.

Sure, there’d be Medicare for all, everyone would go to college for free (on the taxpayers’ dime), the income gap would be somehow dissolved, and every other utopian socialist daydream would magically come true. But speak positively about what America used to be, and be prepared to face the consequences.