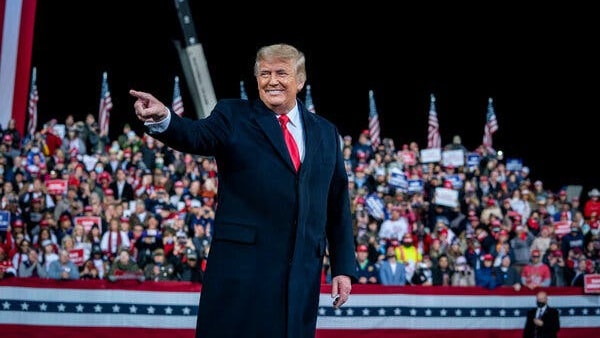 Five months out from election day and with the economy on a comeback, many state and county Republican Party chairs predict a close election with a Trump Victory. – Newt

By many conventional indicators, President Trump is in trouble for the 2020 election. The coronavirus pandemic continues, and the economy is still struggling. But several state, district, and county Republican Party chairs depict a different narrative, according to which “the coronavirus is on its way out and the economy is coming back. Polls are unreliable, Joe Biden is too frail to last, and the media still doesn’t get it.” They believe that nothing is going against “Teflon Trump.” Many of these officials say they observe support for the president only rising, adding that they distrust polling. “‘The narrative from the Beltway is not accurate,’ said Joe Bush, chairman of the Republican Party in Muskegon County, Mich., which Trump lost narrowly in 2016. ‘Here in the heartland, everybody is still very confident, more than ever.’”

The radical far-left faction of the Democrat Party has pushed Joe Biden to endorse Nancy Pelosi’s insane $3-trillion bill completely. There is no debate, no compromise, and Republicans are apparently “damn stupid” for not wanting to destroy our country. – Newt

Joe Biden, the Democrats’ presumptive presidential nominee, said Friday that Senate Republicans are “so damn stupid” for not passing a $3 trillion bill to address the coronavirus pandemic approved by House Democrats last month. Democrats did not seek any Republican input when drafting the bill, which includes numerous measures favored by the Democratic base that don’t relate to the pandemic. “It passed through the House,” Biden told members of the American Federation of State, County and Municipal Employees. “Get state and local governments the funding they need to keep millions of people on the job. Because, here’s the — they’re so damn stupid, darn stupid. If you don’t have people on the job dealing with controlling the virus, then it’s just going to get worse.” Biden added that only the federal government can fund towns and other local communities sufficiently.

Health price transparency + innovative self-funding employers = better health outcomes at much lower costs. The Singapore model is great, and, in fact, several US companies are showing us the way too. – Newt

In the US, consumers don’t know what they’re buying or how much it costs, and health care providers don’t tell patients in advance about pricing, outcomes, or alternatives. “If the US wants lower costs, better outcomes, faster innovation and universal access, it should look to the country that has the closest thing to a functioning health-care market: Singapore.” The city-state only spends five percent of its GDP on medical care but has better health outcomes than the US, which spends 18 percent of GDP on health. Singapore has better policies concerning price transparency, health savings accounts, and a limited but effective safety net. “Let’s follow the path of Singapore, Rosen Hotels and Resorts, and Walmart by using markets and competition to make health care affordable for all while improving quality and innovation.”

The Democratic Party did not let the crisis of the killing of George Floyd go to waste, lecturing the country about how systemic racism is supposedly rampant in the US. “The great irony here is that yes, there’s plenty of systemic racism in our country; it’s all wrapped up in the history of the Democratic Party.” The rot dates back to the post-Civil War era, when the Democrats began imposing and enforcing Jim Crow laws. “The Republican Party had planks in its party platforms addressing the rights of African-Americans in the early 20th century. The Democrats, meanwhile, used the KKK as their stormtroopers, lynching and terrorizing blacks in the South beginning just after the Civil War and continued this practice for a century.” Systemic racism can only be addressed when Democrats look themselves in the mirror.

Sybrina Fulton, the mother of Trayvon Martin, said recently that she doesn’t support efforts to reduce resources for law enforcement amid rising calls from left-wing activists and politicians to defund the police. “I think we need more police,” she said. “We need police with better standards, and police with better ethics and better work habits.” Fulton announced last week that she is running for Miami Dade County Commissioner District 1. “I want residents to feel safe,” she said. “I want to bridge the gap between the law enforcement and the community.”

Martin was killed in 2012 during a physical confrontation with a neighborhood watch volunteer. The volunteer, George Zimmerman, was acquitted, which helped spark the Black Lives Matter movement.