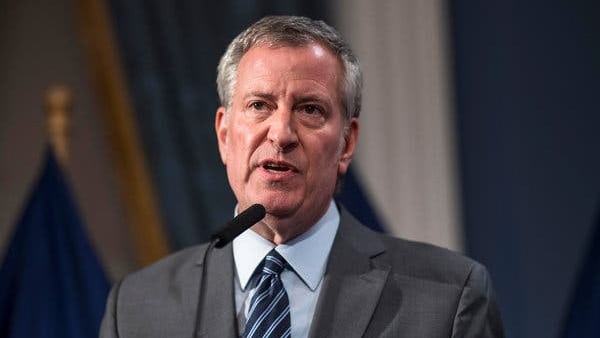 On Sunday, thousands of people crowded in Brooklyn to rally for the black transgender population. At the same time, hundreds of protesters gathered in Upper Manhattan to support the Black Lives Matter movement. Soon, the protest in Manhattan swelled into the thousands after merging with another rally in Harlem. In each case, social distancing was physically impossible. Among those marching in Harlem was one Bill de Blasio, the mayor of New York City. He even tweeted about it, showing a picture of himself talking awfully close to someone with an uncovered face.

The very next day, however, workers for the city welded shut playgrounds in neighborhoods populated predominantly by Orthodox Jews — presumably to prevent people from crowding together. In non-Jewish areas, meanwhile, public parks are open, undisturbed by officials ordered to lock them down.

When asked Tuesday about the Orthodox Jews who later reopened the gates with bolt cutters, de Blasio said, “We’re not going to allow people to take the law into their own hands.” (Apparently, the rioters looting stores, burning buildings, and calling for the police to be defunded are, unlike the Jews, just abiding by the law.)

“If folks act prematurely and that causes the [coronavirus] to start spreading again, then that’s the kind of thing that will undermine our ability to get to phase two,” de Blasio added.

In other words, protesters can pile on top of each other by the thousands and New Yorkers can enjoy parks in some areas, but Jewish children, restless from being quarantined, are unable to play outside and breathe fresh air.

The hypocrisy is remarkable. But even worse, it’s just the latest example of de Blasio targeting, scapegoating, and applying egregious double standards to New York’s Jewish community during the coronavirus pandemic.

In late April, up to a couple thousand Orthodox Jews attended a funeral for a Hasidic rabbi who died of the coronavirus. The gathering no doubt risked spreading the disease as the pandemic continued to worsen. De Blasio broke up the funeral and then sent out a threat via Twitter that drew the ire of Jewish groups — and many others — from across the political spectrum.

“My message to the Jewish community, and all communities, is this simple: the time for warnings has passed,” he wrote. “I have instructed the NYPD to proceed immediately to summons or even arrest those who gather in large groups. This is about stopping this disease and saving lives. Period.”

More than a million Jews live in New York City. To blame the entire Jewish community for the actions of a small fraction of Jews is, by definition, antisemitic. Plus, plenty of other people were not practicing social distancing or taking all of the recommended precautions. Yet, de Blasio singled out the Jews, and he did so amid a surge in global antisemitism caused by the coronavirus.

For centuries, Jews have been accused of spreading deadly viruses, and the current pandemic is fueling antisemitism and anti-Israel hatred with people blaming Jews for spreading the coronavirus. De Blasio’s tweet provided further ammunition to the Jew-haters out there spewing this poison.

De Blasio wasn’t done there. In May, he dispersed an Orthodox Jewish school operating in secret — again, to stop the spread of the coronavirus.

“Earlier today the NYPD shut down a Yeshiva conducting classes with as many as 70 children,” he tweeted afterward. “I can’t stress how dangerous this is for our young people. We’re issuing a Cease and Desist Order and will make sure we keep our communities and our kids safe.”

Just this week, neighbors tipped off journalists and New York authorities that Orthodox Jews were gathering to study in secret. One journalist tweeted the photo and even spotted a Jewish child in the window as if it was a major scandal. Imagine that — Jews secretly studying their faith underground, afraid of being caught. Where have we seen this before?

This is the atmosphere that de Blasio has created in New York — one that is increasingly hostile to Jews. To this point, de Blasio’s problems with the Jewish community go beyond the pandemic. Last year, more than half of all hate crimes reported in New York City were attacks on Jews. Indeed, Jews have been stabbed, beaten, and berated with insults. Synagogues have been vandalized and damaged. Orthodox Jews are being attacked in the street for “looking” Jewish. Meanwhile, some businesses are refusing to serve these “visible Jews.” And this is in New York, home to one of the world’s largest Jewish populations where they should presumably feel more secure.

De Blasio has tried to blame the surge in Jew-hatred on President Trump and far-right extremism. (How inconvenient for him that many of the attackers don’t fit his narrative.) Add his remarkably successful campaign to create an anti-police environment in the city, and the result is little deterrence against antisemitic attacks. De Blasio’s ceremonial condemnations of antisemitism and weak measures to do “something” have created a general attitude of apathy toward the attacks. He is officially part of the problem.

Meanwhile, many observant Jews can’t walk the streets in America’s greatest city without being afraid. This is New York under Bill de Blasio. Simply put, those who claim to oppose antisemitism can’t support this man and be taken seriously.