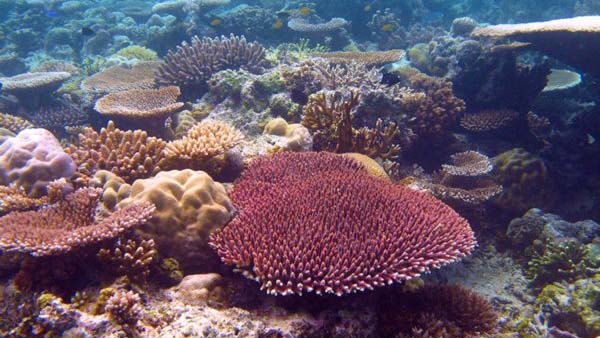 The world’s coral reefs are beautiful, but they do much more for the earth than attract tourism. For example, reefs form a buffer from the effects of hurricanes, and an estimated 500 million people earn money from fishing and tourism opportunities influenced by global reef systems.

Corals live in dense colonies comprised of thousands of individual polyps connected by living tissue. Coral reefs occupy less than 1 percent of the world’s oceans, but more than 4,000 species of fish and many other marine organisms depend on the reef during their life cycles. Coral communities provide spawning ground, refuge, forage, and contribute to the overall health of the ocean ecosystem. However, in the past 30 years, as much as 40 percent of the world’s corals and 92 percent of the branching corals in Florida and the Caribbean have succumbed to climate change, ocean acidification, pollution, and disease. Although their future seems bleak, scientists at Mote Marine Laboratory in Sarasota, Florida have had success in growing corals when they are cut into small pieces and carefully managed. In just 6 to 12 months, the managed coral pieces respond by developing at a much faster pace than a mature colony. They seem to recover much as a human being does when we suffer injury. They exhibit remarkable resiliency and the ability to repair themselves with just a little bit of help from the bipeds at Mote Marine.

Reef-related economic activity generates $6 billion in revenue in South Florida and $15 billion throughout the state of Florida with the commercial and recreational value of the fisheries supported by healthy coral reefs in the Florida Keys generating $750 million of revenue. The restoration of domestic corals is a virtual win-win proposition with value to ecosystem health and a boost to the economy of Florida. Anyone who snorkels among the colorful fish that populate coral reef systems will be in for a treat as it is among the most beautiful aquatic displays available to ecotourists.

Corals also offer opportunity to discover new medicines to treat cancer and other diseases. The harvesting of chemical medicine is known as chemical prospecting, and it is a major justification for the protection of wild habitat on land and in the sea. Corals may be regarded as underwater rainforests occupied by a diverse array of plants and animals.

Creative scientists are our best defense against reefs that degrade due to overheating, pollution, ocean acidification, overfishing, and physical destruction. Improvements at Australia’s Great Barrier Reef have been attributed to the use of probiotics supplied through the minute zooplankton they normally consume. Genetic research is also promising a better future as scientists work to create more resilient, heat tolerant corals. Governments have also been successful in creating marine protected areas which function like underwater national parks under strict protection. Reefs that have been protected from fishing survive when exploitation zones do not and the spillover from thriving populations ultimately revitalize the surrounding seas. New marine reserves are needed in strategic locations worldwide.

The scientific team at Mote Marine working at the Elizabeth Moore International Center for Coral Reef Research and Restoration is harvesting samples of the corals that have survived environmental stresses, selectively breeding them by hand, and reattaching them to the reef. The center has 46,000 corals growing on underwater plastic lattices in its dedicated nursery. The scientists there have regrown more than 70,000 corals from five different species on damaged reef systems. The leader of the Mote team, Dr. Erinn Muller is doing her best to restore corals and reduce the need for future restoration.

Throughout the world, corals are making a comeback thanks to effective collaboration between zoos, aquariums, and universities devoted to the cause. The Association of Zoos and Aquariums has highlighted coral reef restoration as one of its most impressive success stories in the face of impending climate change. Optimism prevails in these institutions as they continue to devote so much of their earned revenue to solving the complex problems presented by our changing ecosystems.

This is another example of how conservation is driven by investments in evidence-based science. World aquariums are working on the frontlines of this titanic struggle for survival.