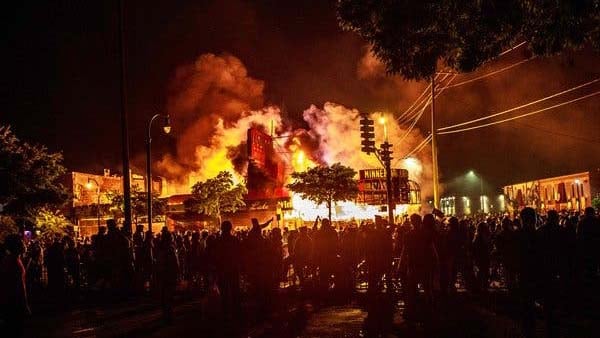 Since George Floyd’s killing, woke progressives have been teaching a master class on how to perpetuate racism. Naturally, these warriors for social justice say the ongoing civil unrest across America is meant to combat oppression. Many athletes, journalists, celebrities, academics, and politicians echo their claims. They all may very well have the right intentions. But the fact remains that the protests and riots, the toppling of statues and vandalizing of monuments, and the visceral hostility toward law enforcement all ensure that intolerance is here to stay.

The reasons why stem from progressives’ emphasis on social justice rather than equal justice. The former is a woke buzzword that basically means redistributing wealth, opportunities, and privileges to right society’s wrongs by benefiting the oppressed at the expense of their oppressors. Amid today’s racial unrest, this involves trying to create equal outcomes for black Americans by chipping away at — or dismantling — the power of whites.

Equal justice, meanwhile, requires equal opportunities for everyone, regardless of identity, to live, be free, and pursue happiness — all while enjoying equal treatment and protection under the law. This is the way to move past racism as a society, not remain shackled by it.

The danger comes when trying to ensure certain outcomes for people. Even in the name of equality, doing so takes away people’s agency and dignity. Indeed, social justice is all about defining certain groups as helpless victims in need of rescuing. As CNN host Don Lemon told his colleague Chris Cuomo last month, it is “not incumbent upon black people to stop racism. It is incumbent upon people who hold the power in this society to help to do that, to do the heavy lifting. Who is that Chris?”

Many of the progressives like Lemon who are aggressively pursuing the agenda of the Black Lives Matter movement are portraying black people in this manner — as weak and helpless without the help of white people. Rather than empower the African American community, this attitude creates racial bitterness and, perhaps counter intuitively, creates a false and shameful narrative of white superiority. If the goal is to stop racial prejudice and discrimination, then denigrating blacks and villainizing whites only makes the problem worse.

These same voices are also perpetuating intolerance by trying to eradicate all offensive things from existence. Every day, we see rioters in the US and western Europe toppling statues and vandalizing monuments of heroes like George Washington, Thomas Jefferson, and Winston Churchill, who are erroneously being demonized as bigots and nothing more.

There are also movements heating up across America to ban, for example, books by Harper Lee and Mark Twain because their content, including the use of racial slurs, may upset students. Never mind that To Kill a Mockingbird and The Adventures of Huckleberry Finn are two of the great anti-racist works in American history. More concerning is the push to protect people from any and all offenses and adversity. Such a society creates weak, perpetual children who will be utterly unprepared for life. The instinct not to offend people also means not exposing students (and even adults) to opposing viewpoints. It’s easy to see how this creates a new generation of intolerant, close-minded people, many of whom become intolerant, close-minded activists. These are the people who are often not content with peaceful protests to get their point across and resort to rioting. And these are the people who don’t judge individuals by the content of their character, but by their race or class or sexual orientation or political affiliation.

The woke among us — those supposedly alert to social injustice, from Seattle’s autonomous zone to the riot-ridden streets of Minneapolis — are creating more racial issues than they’re stopping. By prioritizing social justice, treating black people as victims, and remaining close-minded to opposing views, these so-called progressives are creating a recipe for racism and intolerance to remain alive and well. This is the progressive guide on how not to combat racism. So far, it seems to be working well.