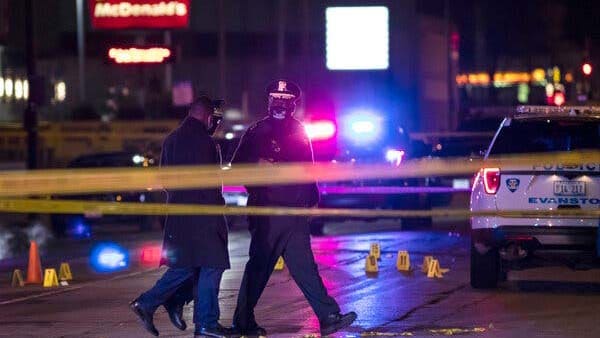 I’m not being facetious. I ask the question: Do Black lives matter in Chicago as a serious commentary on our current crisis.

Last weekend, CBS 2 in Chicago reported from 5 p.m. Friday to 5 a.m. Monday, there were more than 100 people shot – and at least 13 were killed. Twelve of these shooting victims were children, and five of them perished.

We do not yet know the demographic breakdown of this weekend’s victims, but we do know that African Americans accounted for roughly 81 percent of Chicago’s homicide victims in 2019 and 79 percent in 2018.

Chicago Police Supt. David Brown told the network, “Children in Chicago should not have to worry about walking just blocks from home to buy candy, and never returning.”

Brown explained that these horrific acts of violence were occurring because the Chicago justice system was releasing violent felons from jail too quickly, and then not keeping tabs of them.

So, with at least 102 Americans shot and at least 13 dead, the fact that five of the dead were innocent children (including a toddler), and the likelihood that many of these victims were African Americans – where is the organization called Black Lives Matter in Chicago?

Well, one of the leaders of Black Lives Matter was promising to destroy America. Hank Newsome was quoted in the New York Post saying: “If this country doesn’t give us what we want, then we will burn down this system and replace it. All right? And I could be speaking figuratively. I could be speaking literally. It’s a matter of interpretation.”

This goal of radical change was the basis of founding Black Lives Matter. As Jerry Dunleavy reports in the Washington Examiner, “The co-founder of Black Lives Matter names a convicted cop killer as one of her heroes, and the BLM national organization is fiscally sponsored through a leftist group whose board of directors includes a convicted terrorist.”

This radicalism should not come as a surprise. A 2017 Black Lives Matter report identifies its founders as “three radical Black organizers.” One co-founder, Patrisse Cullors, described herself and founder  Alicia Garza in 2015 as “trained Marxists” who are “super versed on, sort of, ideological theories.”

So, it seems dead and wounded Black lives in Chicago do not meet the political-propaganda media standard that moves forward the radical goals of the organization. But isn’t ignoring the ongoing violence in our cities that primarily destroys black lives an example of the systemic racism that BLM is supposed to be fighting against? It’s got a clever name – but Black Lives Matter is a dangerous organization. I wrote about the larger radical anti-police movement BLM and Democrats are leading in my new book Trump and the American Future.

You would never know it from the propaganda media (which was formerly the national news media but is now hopelessly dishonest and ideological) but the American people are pro-police. Americans also clearly understand the insanity of defunding – or even reducing funding for – police at a time of riots, looting, and dramatically increased violence.

A recent Rasmussen’s report has made clear how wrong the radical Left is on the issue of the law enforcement. Rasmussen found that 63 percent of American adults “still regard being a police officer as one of the most important jobs in our country today.” This has only dropped 5 percent in three years.

Further, 64 percent are concerned that the current anti-police sentiment will lead to fewer people willing to become police officers – and “reduce public safety in the community where they live.” Importantly, according to the Rasmussen report, “Blacks (67%) are the most concerned about public safety where they live, compared to 63% of whites and 65% of other minority Americans.”

A majority of Americans (56 percent) who are likely to vote agree with President Trump’s statement: “Our police have been letting us live in peace, and we want to make sure we don’t have any bad actors in there. [But] 99% of them are great, great people.”

When it comes to cutting police budgets, a full 59 percent are opposed to the idea and 14 percent are undecided, according to Rasmussen Reports.

Finally, the pollster previously found only 16 percent of Americans believe police are racist and 67 percent still believe their local police performance is “good or excellent.”

As people come to understand that the Biden-Pelosi-Schumer team is in favor of promoting radical organizations, destroying statues, and ignoring wide-spread violence – and that President Trump is for supporting well-trained police who stop the violence and protect the innocent – the likelihood of President Trump’s success in November will grow.

The fact is: Black lives do matter in Chicago – even if they don’t matter to the Black Lives Matter political organization.

We should fight for a criminal justice system that does not tolerate or condone violent crime (while still ensuring that those who commit non-violent crimes due to addiction or mental illness get the treatment they need).

We should fight to triple the police force in places like Chicago.

We should fight for school choice, so all children can learn enough to get jobs.

We should declare all of south side Chicago a giant opportunity zone to bring jobs back while pushing violence out.

We should organize the local churches and synagogues into a program of ending violence and creating opportunity, success, and accountability.

Every life matters. And after 89 years of Democratic control in Chicago, it is time for Republicans to extend a helping hand to suffering people in devastated neighborhoods.

We must overcome the terrible legacy of destructive Democratic policies and values in Chicago and other places the Democratic party has gutted.