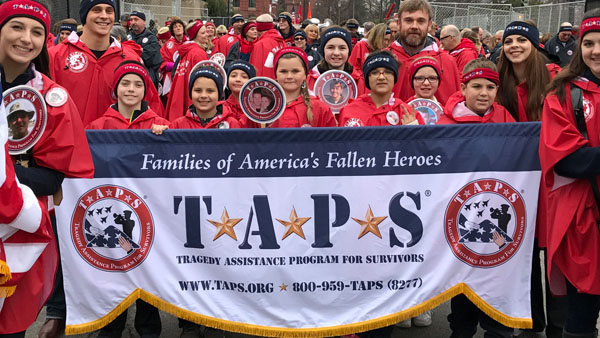 The Gingrich Foundation is proud to recognize the Tragedy Assistance Program for Survivors (TAPS) as its charity of the month for July.

TAPS is a national nonprofit veterans service organization founded in 1994 by Bonnie Carroll following the death of her husband, Brig. Gen. Tom Carroll, and seven others in a plane crash. Inspired by the care and support she received from the families who also lost loved ones in the tragic event, Bonnie endeavored to create a system of support for those in need of hopeful healing following a loss.

Hundreds of American soldiers, sailors, Marines, and airmen die in service to our country each year, leaving behind their beloved families and friends. Through its national military survivor peer support network, TAPS brings together the families, friends, and coworkers of those suffering a loss to promote healing. TAPS provides many services such as peer-based emotional support services, crisis response and intervention, long-term survivor wellness support, suicide prevention and postvention, and military outreach. In 2019, TAPS helped nearly 7,000 newly bereaved loved ones and connected them to a network of 90,000 people who are also grieving and recovering from tragedy.

The mission of TAPS is to provide compassionate care and support for all those grieving lost loved ones who served in the Armed Forces. Its national military survivor helpline is available toll-free 24 hours a day, seven days a week. TAPS is there to provide comfort and resources, at no cost to the grieving friends and family of America’s fallen military heroes.

Please join the Gingrich Foundation in supporting TAPS and the great work it does for America’s veterans and their families today.