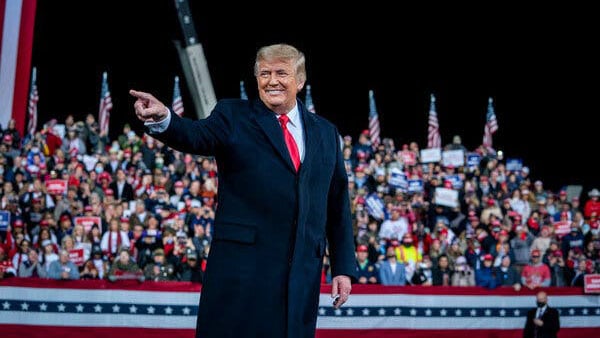 Are We Being Set Up for Another Stunning Trump Win?
By Richard Lim
Washington Examiner

The 1948 and 2020 elections are quite similar in many ways. In June 1948, Harry Truman’s approval rating was low, and politicos were increasingly confident that he’d lose in November. The media also mocked Truman and described him as desperate and unhinged. And yet, in a stunning victory, Truman won the presidential election in November. Experts struggled to make sense of what happened. Seventy-two years later, President Trump finds himself in a similar situation: He’s performing poorly in the polls, and the media thinks his opponent is poised to win. The 1948 election tells us, however, that President Trump could very well win. Two dynamics that were decisive in 1948 are also at work in 2020. The first dynamic is political staying power. The second factor is that people “often vote for incumbent presidents based on certain intangibles (leadership skills or likability) despite the candidate’s perceived flaws or policy disagreements.” In short, history shows us that the experts can get it wrong.

In a new video, Planned Parenthood and abortion industry officials give testimony describing how babies born alive, with beating hearts, in their facilities are then harvested for organs. – Newt

The Center for Medical Progress released a new video showing Planned Parenthood and abortion industry officials describing in sworn testimony “how babies born alive with beating hearts in their facilities are then harvested for organs.” In recent years, Planned Parenthood has denied that its facilities sell fetal body parts from abortions. But the new video reveals witnesses under oath saying that the organization profited from the sale of fetal organs and, along with its business partner, Advanced Bioscience Resources, violated federal law mandating that a fetus born with a beating heart is a human being equally entitled to protections under the law.

In addition to providing greater school choice for parents, Espinoza v. Montana Department of Revenue is a landmark victory for religious liberty in America. – Newt

A School Choice Landmark
By The Editorial Board
Wall Street Journal

In a 5-4 decision on Tuesday, the Supreme Court saved a scholarship program in Montana that was in jeopardy because students used it to attend religious schools. “A State need not subsidize private education,” Chief Justice John Roberts wrote in the majority opinion. “But once a State decides to do so, it cannot disqualify some private schools solely because they are religious.” The case, Espinoza v. Montana Department of Revenue, was brought to the high court after Montana’s Legislature decided in 2015 to give a $150 tax credit “to people who donate to a nonprofit scholarship fund, which then awards the money to families.” After an incident with bullying, Kendra Espinoza moved her daughters to a nondenominational Christian school, with the costs defrayed by scholarship funds. In 2018, however, the state Supreme Court struck down the program. Montana’s constitution bans “any direct or indirect” payments to any schools or institutions controlled “by any church, sect, or denomination.” But there’s also the First Amendment. Roberts wrote that Montana’s constitution wrongs parents “if they choose a religious private school rather than a secular one, and for no other reason.” The Supreme Court’s ruling could encourage states with similar provisions to the one in Montana’s constitution to be less tentative about direct vouchers as they consider passing new school-choice programs.

The VA union leader is trying to use the pandemic crisis to sow discord — with eager help from the press. Our veterans need a focused, supported VA now more than ever. Opportunistic union attacks aren’t helping our veterans. – Newt

The union representing thousands of employees at the Department of Veterans Affairs is using the coronavirus pandemic to sow discontent within the VA and negotiate a longstanding contract dispute in the press. “This strategy is being deployed even as VA grapples with protecting thousands of veterans from a virus that has challenged health care systems across the globe, and as VA employees work together to fight this pandemic on the front lines.” Today, the VA is committed to serving America’s veterans, especially amid the coronavirus. The union makes several false or dubious claims, above all that the VA’s leadership is trying to privatize the department. “It appears as if the union bosses are not happy that the Trump administration has taken significant steps to make sure caring for veterans is Mission No. 1 at VA after the scandals of the prior administration.” The coronavirus crisis should bring the VA together, not drive it apart.

Once again, Congressional Democrats show they are allies of the Chinese Communist Party. They refuse to condemn CCP efforts to disrupt our ability to fight the pandemic that China’s leadership caused. – Newt

On Tuesday, House Democrats shot down a procedural vote that would have condemned “the cyber-attacks perpetrated by China and other rogue states on American institutions in an effort to disrupt or hinder the response to the novel COVID-19 pandemic.” The resolution would have “held those who carried out the attack responsible for the damage they caused while discouraging others from carrying out similar attacks.” Not one single Democrat voted to hold China accountable. The vote fits with the Democrats’ consistent refusal to hold China accountable for the coronavirus pandemic. Democrats have instead been more focused on criticizing President Trump and others for referring to the coronavirus as the “Chinese virus.”