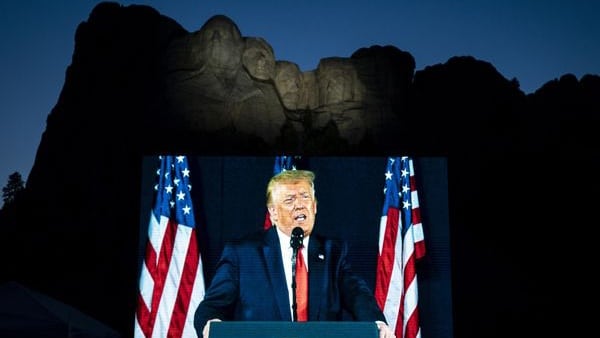 To my surprise (and I suspect virtually everyone’s surprise) President Donald Trump is carving a place in history as a teacher and statue builder. This was a major outcome of his extraordinarily powerful speech at Mount Rushmore on July 3.

In many ways, President Trump is responding to President Ronald Reagan’s Farewell Address in which he said:

“But now we’re about to enter the nineties, and some things have changed. Younger parents aren’t sure that an unambivalent appreciation of America is the right thing to teach modern children. And as for those who create the popular culture, well-grounded patriotism is no longer the style.

“Our spirit is back, but we haven’t reinstitutionalized it. We’ve got to do a better job of getting across that America is freedom – freedom of speech, freedom of religion, freedom of enterprise – and freedom is special and rare. It’s fragile; it needs protection.

“We’ve got to teach history based not on what’s in fashion but what’s important…. If we forget what we did, we won’t know who we are. I am warning of an eradication of that – of the American memory that could result, ultimately, in an erosion of the American spirit.

“Let’s start with some basics – more attention to American history and a greater emphasis of civic ritual.”

For 31 years, through four presidencies, President Reagan’s call to teach American history and protect American values and symbols has been ignored.

For three decades, the anti-American elements in our schools, propaganda media, and bureaucracies gained momentum and began to censor, condemn, and destroy American history, values, and symbols.

The Mount Rushmore speech itself was an amazing defense of American history, achievements, and values. This is precisely why the activists of the anti-American left and the propagandists pretending to be news media had to attack the speech. It repudiated their anti-American worldview.

Then, in a time of mobs tearing down statues, President Trump came up with a positive counter-offensive — let’s build a national statue park to honor  great Americans. In effect, he was upping the ante on the Marxist mob who wants to destroy America’s memory of its own history.

The idea that President Trump could become a leading advocate of American history and statue building is a reminder of how the challenges of the presidency lead great leaders to rise to meet the needs of reality.

President John F Kennedy captured this sense that history is bigger than any president when he put on his desk a Breton fisherman’s prayer “O, God, thy sea is so great and my boat is so small.”

The sea of history reshaping presidents is a deep American story.

President Thomas Jefferson campaigned on frugality and limited government, but when he had the chance to double the United States by making the Louisiana Purchase for $15 million, he did so without hesitation.

President Abraham Lincoln’s only military experience was as a volunteer for a few months in a local war with Native Americans. But, when the Civil War required it, he borrowed all the military theory books from the Library of Congress and became our most capable Commander in Chief.

President Harry Truman ascended from the vice presidency when President Franklin D Roosevelt died. He had seldom been briefed on military and foreign policy issues, but within days he took command and made the decisions which ended World War II and contained the Soviet Empire.

President Trump has faced a similar requirement to develop expertise and knowledge in areas he never thought would be central to his presidency.

The Trump Administration was focused on creating jobs, developing better trade deals for America, and containing the Chinese Communist dictatorship while reducing the risk of our young men and women being killed in endless wars.

For a little more than three years, the Trump boat (to use the JFK analogy) was sailing purposefully toward success. Then the sea of history struck. First came the Chinese virus. Then came the government-imposed depression and self-isolation. Then came the horrific killing of George Floyd, which led to peaceful protests at first. Then, in response to the weakness of local Democratic officials, violent looting, and the spread of anti-American violence against people, property, and symbols began.

President Trump understood that the greatest threat was the rise of the anti-American left – and its desire to destroy American history, symbols, and culture. He knew we would recover economically. Indeed, this was his special expertise and the recovery has begun. He knew the virus would eventually be conquered.  However, the continuing growth of the anti-American left in intensity, numbers, and acts of destruction does not have a natural end.

The speech at Mount Rushmore was a deliberate strategic response to the continuing attack on American history, which President Reagan had discussed 31 years ago. In itself, the speech is a powerful introduction to American history and values.

Then, President Trump put an enduring stake in the ground in the struggle against those who would erase America’s history and deny the reality of America’s heroes:

“I am announcing the creation of a new monument to the giants of our past.  I am signing an executive order to establish the National Garden of American Heroes, a vast outdoor park that will feature the statues of the greatest Americans to ever live.”

The challenges of the anti-American left called for a visionary response grounded in American history and values.  President Trump embraced teaching and sculpture-building as the historically necessary response to a mortal threat to America’s survival.

It is an amazing achievement.