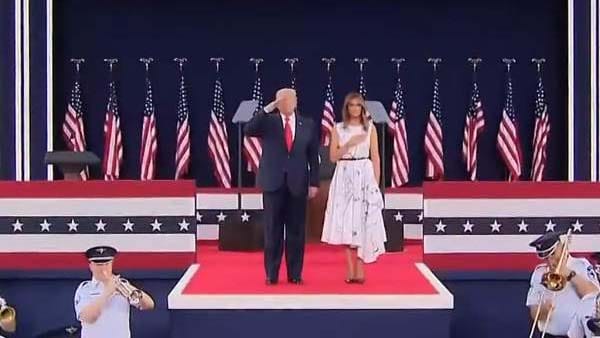 Trump at Mount Rushmore
By The Editorial Board
Wall Street Journal

President Trump delivered one of the best speeches of his presidency at Mount Rushmore on Friday, yet the media panned the speech as dark and divisive. In reality, the president delivered “a familiar Fourth of July ode to liberty and US achievement.” He also tried “to rally the country in defense of traditional American principles that are now under radical and unprecedented assault.” Contrary to the media’s reporting, President Trump described an American vision of racial equality and diversity, not one of bigotry and division. Indeed, “there was not a hint of racial division in his words except for those who want to distort their meaning for their own political purposes.” If President stays on script and adds an agenda for a potential second term, then he may very well be reelected. But regardless of who wins in November, progressive elites will continue to fail to stand up to the radicals trying to impose their intolerant, far-left views on the country.

Gianno Caldwell does an outstanding job of outlining why Donald Trump has been one of the most impactful presidents for African Americans from a policy perspective. – Newt

President Trump’s policies made possible the best economy that African Americans have ever seen. “Unemployment for [blacks] was the lowest in recorded history, black wages were rapidly increasing for the first time in decades, and people who’d been out of work long-term were being hired and suddenly able to take their families on vacations for the first time in years.” Tax cuts and strong, consistent GDP growth led to companies feeling secure and people having confidence in the economy. President Trump seemed poised to cruise to reelection. Then, the coronavirus pandemic ravaged the economy. Plus, amid the ongoing racial unrest, the media continues to push the narrative that President Trump is racist. At this point, the black vote is for Joe Biden’s taking, despite the fact that Biden has a history of supporting policies that hurt African Americans. He has also used racially charged language. “Trump needs to remind African Americans about what he has accomplished and contrast it with Biden’s record of failure, mass incarceration, and racially charged language.”

Several hundred political appointees who worked for President George W. Bush have endorsed Joe Biden for president. “They’ve done this even though Democrat Biden has promised to undo President Trump’s enormously beneficial tax cuts, empower the administrative state, and adopt harmful socialist policies on health care, the Green New Deal, and other areas.” In fact, Biden is embracing radical policies to the left of any previous Democratic president in history. There are three possible reasons to explain why so many members of the Bush administration are supporting Biden. First, they could have been lying for all the years during which they claimed to support conservative economic principles. Second, “they could have become so entangled in the DC swamp” … that they “have lost their former limited government moorings.” Third, they may want to go back to work in government “think a Biden administration would give them the opportunity, in an effort to claim it was embracing bipartisanship and moderation. They may have concluded that socialism is the wave of the future and they need to embrace it to get back in government.”

Democrats have introduced two bills in the past week to push forward with the radical “Green New Deal” by masking changes in the tax code. – Newt

The most straightforward way to push reforms in government today is through the tax code. Democrats tried this tactic twice in recent weeks to implement their Green New Deal, a series of proposals that comprise a radical environmental agenda. The first case was a “catch-all ‘Green New Deal’ plan called the ‘Moving Forward Act,’ a kind of ‘Contract with America’ for radical environmentalists.” The second case was a “more conventional highway funding reauthorization pork-barrel bill, but it contained a raft of green tax credits and other tax code atrocities.” Each of these bills contains an extension of the investment tax credit, which provides tax breaks for the purchase of green energy equipment, and an expansion of the credit to include energy storage devices. “These crony tax credits are used disproportionately by the most affluent taxpayers who need them the least to afford their woke, green virtue signaling.” These credits are not accessible to lower-income families. It’s clear that Democrats want to ram through “their de facto religion of radical environmentalism.”

In another positive sign the economy is coming back from the lockdown, the Institute for Supply Management is reporting that its non-manufacturing activity index jumped to 57.1 in June, the highest reading since February. – Newt

Activity in America’s services industry rebounded significantly in June, almost returning to its pre-coronavirus levels. “The Institute for Supply Management (ISM) said on Monday its non-manufacturing activity index jumped to a reading of 57.1 last month, the highest since February.” The index showed a reading of 45.4 in May and 41.8 in April. The latter was the lowest reading since March 2009. “A reading above 50 indicates growth in the services sector, which accounts for more than two-thirds of US economic activity.”