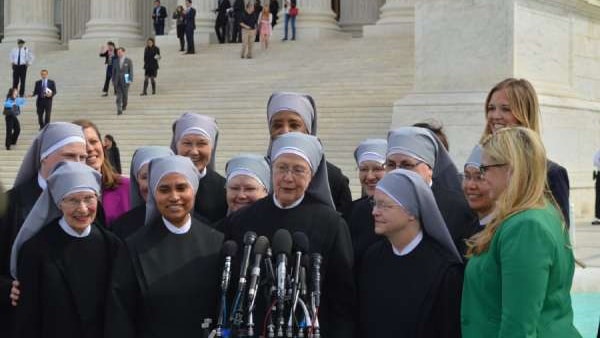 The Supreme Court ruled once again in favor of the Little Sisters of the Poor on Wednesday. Nonetheless, Joe Biden quickly promised to bring the nuns back to court if he becomes president. Biden said that the high court was “attempting to carve out broad exemptions to the Affordable Care Act’s commitment to giving all women free access to recommended contraception” and that, if elected, he “will restore the Obama-Biden policy that existed before the Hobby Lobby ruling.” The Democrats’ presumptive presidential nominee seems to see the First Amendment’s clause on freedom of religion as a “carve out” rather than a basic right. His crusade against Catholics fits with the Democratic Party’s larger campaign against Catholics, fueled in large part by the Church’s opposition to abortion.

The US Postal Service inspector general’s report for Wisconsin reveals another example of the potential ramifications in the upcoming elections as officials brace for record-shattering absentee ballot requests this fall. – Newt

The US Postal Service has identified hundreds of ballots from Wisconsin’s elections in April that never reached voters or couldn’t be counted because of problems with postmarks. A report by the post office’s inspector general “chalked the problems up to receiving outgoing absentee ballots at the last moment from election officials, inconsistent postmarking of ballots, and one mail carrier’s inattention to getting absentee ballots to voters.” Because of the coronavirus pandemic, nearly one million voters cast their ballots by mail. The report “offers a cautionary tale for Wisconsin and other states as election officials brace for record-shattering absentee ballot requests this fall.” The report only covers some of the many issues that marred the voting.

In the age of social media, for the youth of America, your opinions and activities are an open book for employers and others to view. – Newt

The Fragility of the Woke
By Victor Davis Hanson
Daily Signal

What turns off so many Americans about the current riots, threats, shouting, looting, and statue toppling across the country is “the schizophrenic behavior of so many of the would-be revolutionaries.” The social justice warriors in the streets “pose as vicious Maoists,” taunting police, vandalizing monuments, and even using violence. But these activists would never act this way when alone confronting, say, a welder. They are scared of being jailed or having an arrest on their record. They are shocked and dismayed that vicious content they post online can be used to charge them for crimes. Antifa, Black Lives Matter, and their wannabees “are mostly made up of middle-class youth, often either students or graduates. They deem themselves the brains of the rioting, the most woke of the demonstrators, the most sophisticated of the iconoclasts.” They are also passive aggressive and are paranoid about being charged or hurt. Many are accustomed to comfort but realize “they will never become securely comfortable,” unable to achieve true upward mobility.

President Trump recently announced his Hispanic Prosperity Initiative to improve Latinos’ access to educational and economic opportunities. Democratic politicians and activists immediately launched a campaign to boycott Goya Foods, whose CEO, Bob Unanue, is a commissioner of the initiative. Goya Foods, a family-owned company founded by immigrants, is the largest Hispanic-owned food business in the US. The company also donates to food banks and needy families across America. “Yet Trump’s outreach efforts to minorities have always triggered a particular case of Trump Derangement Syndrome among Democrats and activists.” Rep. Alexandria Ocasio-Cortez (D-NY) joined the boycott campaign, among many others. Hispanics will be the largest block of minority voters in the 2020 election, and Democrats don’t want anything interfering with their widespread support among the Hispanic community, which they take for granted.

Amid revenue shortfalls and calls to defund police, some cities are on track to have their most violent summers in years. – Newt

Law enforcement officials in several large American cities are trying to deal with a surge in violent crime amid a national debate over the role of and budgeting for police. “Some cities are on track to have their most violent summers in years.” In Milwaukee, for example, homicides are up 37 percent so far this year and on a record-setting pace. Violent crime has also increased significantly this year in cities such as New York, Chicago, Los Angeles, and Kansas City. Police departments are already facing budget cuts because of the coronavirus pandemic and now facing public pressure to take more drastic measures. “City leaders and law-enforcement officials say the months of lockdown, rising unemployment, more guns on the street, and the fallout from mass protests over the George Floyd killing helped create conditions for more violence.” Officials are also “weighing the risks of aggressively enforcing the law, concerned that a backlash from activists, protesters, and residents could trigger attacks on police or a replay of the riots and looting that marked some of the earlier protests. In some cases, officials say, police are backing away from some kinds of petty crime arrests that give them a higher profile on the street, hoping to quell tensions.” With less revenue and activists calling to defund the police, cities are cutting police budgets without replacing functions typically performed by the police.