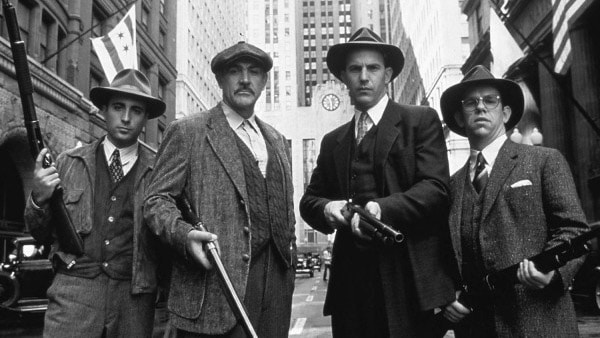 As I noted in the chapter “Loving Criminals, Hating the Law” in my new best-selling book Trump and the American Future, there is a deep passion on the left to give criminals every possible break (no bail and automatic release in New York City, for example) while slandering, attacking, and attempting to defund the police. The Pelosi tweet is in this anti-police tradition.

Far from being so-called stormtroopers, federal law enforcement officials involved in Operation LeGend are in a tradition that everyone who has seen the Kevin Costner movie, The Untouchables, will recognize. In 1930, Al Capone’s criminal organization was so big and profitable it had corrupted law enforcement and elected officials in Chicago. The United States government established a small team which methodically began destroying Capone’s illegal empire.

An earlier federal intervention was, in many ways, the first big national story which led to the Federal Bureau of Investigation being established. Faced with a wave of murders of Native Americans of the Osage Nation, who were killed for their oil royalties and unable to get local law enforcement to do anything in 1925, the elders of the Osage tribe asked the then-Bureau of Investigation and its young director, J. Edgar Hoover to investigate the murders and find the killers. The heavily publicized success of a small number of federal agents in ending the killings helped launch Hoover’s career – and what became the Federal Bureau of Investigation in 1935.

My granddaughter Maggie got me to read David Grann’s book Killers of the Flower Moon: The Osage Murders and the Birth of the FBI. It is an amazing and little-known story of local corruption and the value of an active federal law enforcement system.

A more recent example of federal law enforcement intervening when local police and local politicians fail to protect American lives was the 1964 killing of three civil rights workers in Mississippi, the so-called Mississippi Burning Murders. It was clear that local law enforcement and local politicians would do nothing to find the murderers. President Lyndon B. Johnson sent in the FBI. Agents found the hidden bodies of the three young Americans (buried in an earthen dam on a farm) and tracked down the killers, who were brought to trial on civil rights violations.

In this same tradition of intervening when local politicians and law enforcement fail to do their jobs, President Trump outlined the case for decisive federal involvement in saving lives.

President Trump started by reminding everyone on Wednesday that protecting the American people was his “sacred obligation.”

“In recent weeks, there has been a radical movement to defund, dismantle, and dissolve our police departments.  Extreme politicians have joined this anti-police crusade and relentlessly vilified our law enforcement heroes.  To look at it from any standpoint, the effort to shut down policing in their own communities has led to a shocking explosion of shootings, killings, murders, and heinous crimes of violence.  This bloodshed must end.  This bloodshed will end.

“Politicians running many of our nation’s major cities have put the interests of criminals above the rights of law-abiding citizens.  These same politicians have now embraced the far-left movement to break up our police departments, causing violent crime in their cities to spiral — and I mean spiral seriously out of control.

“In New York City, over 300 people were shot in the last month alone.  A 277 — at least — percent increase over the same period of a year ago. Murders this year have spiked 27 percent in Philadelphia and 94 percent in Minneapolis compared to the same period in 2019.

“Perhaps no citizens have suffered more from the menace of violent crime than the wonderful people of Chicago — a city I know very well.  At least 414 people have been murdered in the city this year, a roughly 50 percent increase over last year.  More than 1,900 people have been shot.  These are numbers that aren’t even to be believed.

In a stunning moment of tragic irony, the day before Trump’s speech, Chicago Mayor Lori Lightfoot criticized President Trump’s plan saying he was trying to deploy “unnamed special secret agents” and strip civil liberties form people. She said it “is not going to happen in Chicago.” It was the same day the15 people were shot and killed at a funeral home – where they were grieving for someone who had been killed by criminal violence. What about their civil liberties, Mayor Lightfoot?

It amazes me that none of these Democratic mayors in New York City, Chicago, St Louis, Minneapolis, Portland, and Seattle – none of them – seem to understand that an anti-police bias creates a vacuum which attracts violent predators.

In an upcoming podcast at Gingrich 360, former New York Police Commissioner Bill Bratton, the man whose policies radically reduced murders in New York City, talks with me about the madness of the current policies and the degree to which they are directly responsible for the explosion of violent deaths.

In this environment, President Trump is exactly right to take steps to protect innocent Americans who are being sacrificed to the ideology of their local Democratic officials.