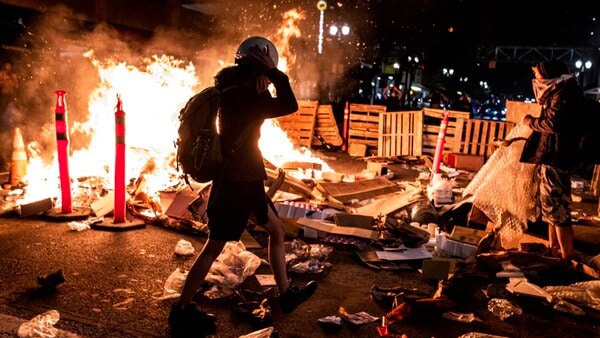 Under the Constitution, the president has the responsibility to protect federal property and execute laws Congress has enacted to address violent crime. – Newt

The Constitution says it’s the president’s job to “take Care that the Laws be faithfully executed.” We here much from the media, politicians, and other critics about how President Trump is trampling on state sovereignty by dispatching federal agents to address the mayhem in places like Portland, but we don’t hear much about the Constitution. We should. According to the Constitution, it’s the president’s solemn duty to execute federal law. He or she must provide for national security and see that the laws are enforced. “The latter duty very much includes the protection of federal property and the execution of laws Congress has constitutionally enacted to address violent crime.” Unlike deploying the National Guard and potentially other military forces, when it comes to law enforcement, “the president and the Justice Department never have to wait for a state to ask for federal intervention.” Federal officers in Portland are not a military force; they are “deputized law enforcement agents of the Department of Homeland Security and other federal police agencies.” This is an important distinction. In short, federal agents in Portland are faithfully executing America’s laws.

The Trump administration is ending the Obama administration’s 2015 Affirmatively Furthering Fair Housing (AFFH) rule. “In nearly every case, it is a fact that local governments are more adequately equipped to deal with their community’s unique needs than any unelected bureaucrat in Washington,” said Ben Carson, the secretary of housing and urban development. “President Trump made a promise to preserve America’s neighborhoods. I am pleased to report that promise has been kept,” Carson added. The Obama administration added the AFFH rule to the decades-old Fair Housing Act to hold local grantees of the Department of Housing and Urban Development accountable to the idea of furthering affordable housing by producing and maintaining assessments of fair housing practices. “Those assessments saddled HUD’s payroll with an estimated 64 additional employees, whose salaries cost American taxpayers up to $15 million a year.” The rule also hurt low-income Americans. Many local jurisdictions opted out of the program due to the cost of producing reports, delivering them to the department, and in many cases, forcing through zoning changes to maintain compliance. As a result, the federal funds were forced into wealthier areas.

A payroll tax holiday benefits those who need it the most: small businesses that need the added cash flow to hire workers to get the economy rolling again. – Newt

America can’t afford to continue providing unemployment benefits to some while leaving Americans who continue to work “high and dry.” We can help the situation with a payroll tax cut, which would provide direct relief to American workers and businesses. A payroll tax holiday “would boost incomes and provide businesses with liquidity. Letting people keep their money is the simplest way to get relief where it’s needed most.” The tax cut helps employers by allowing them to retain and hire more employees, who will add more income. This will help households and families. Further stimulus checks will balloon the deficit and take months to arrive, if at all. A payroll tax cut, meanwhile would “yield real results in real time.”

Mail-in voting is vulnerable to intimidation and coercion by rogue parties looking to install chaos into our election process. – Newt

Some people need absentee ballots — those with disabilities, those who live abroad, and those who can’t make it to the polls on Election Day. But more absentee balloting — let alone all-mail elections — would make election fraud much easier. Mail-in ballots “are susceptible to being stolen, altered, forged, and forced.” Furthermore, at-home voters are vulnerable to coercion and intimidation by campaign staffers, political activists, and others. All of the rules and supervision and transparency that is in place at polling stations is absent at home. Past elections that were stolen through absentee-ballot fraud demonstrate some of these problems. There have been numerous examples in recent decades from across the country. Indeed, the US Election Assistance Commission reports millions of absentee ballots were “either misdelivered by the Postal Service or rejected by election officials after they were returned by voters in the last four federal elections.” We can go to polling places in November. We just need to use “all the same safety protocols recommended by health experts that are allowing us to go to our grocery stores and pharmacies.”

Remdesivir is a success story. Why are left-wing Democrats so determined to destroy it? – Newt

The Raid on Remdesivir
By The Editorial Board
Wall Street Journal

As the coronavirus surges in several states, the death toll is lower in New York and East Coast states than it was in the spring. One reason for the lower death toll is better treatments such as Gilead’s anti-viral drug remdesivir. But “powerful progressives now want the government to set prices for and even confiscate the COVID-19 treatment.” Six Senate Democrats, including Elizabeth Warren (MA) and Bernie Sanders (VT), said in a letter last week to the secretary of Health and Human Services that the Trump Administration “acquired its supply of remdesivir at an exorbitant cost” in a deal that allows Gilead Sciences to reap “windfall revenues” that are paid “by increased premiums for American families.” This claim is simply false, but it shows “the left’s sweeping plan for the government to control drug prices and even pharmaceutical manufacturing.” If progressives have their way, they will kill the very innovation that is saving the lives of so many patients with the coronavirus.