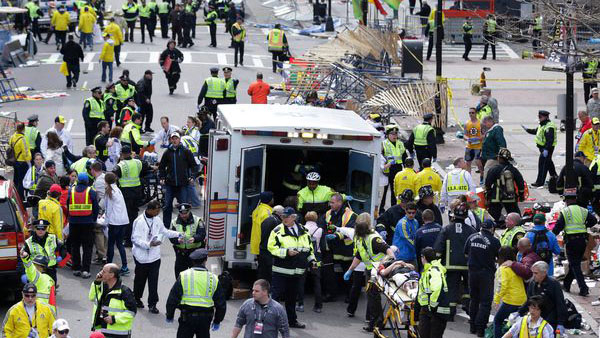 In April 2013, Dzhokhar Tsarnaev and his brother Tamerlan planted bombs near the finish line of the Boston Marathon intending to cause mass terror and suffering. They succeeded: The brothers carried out a large-scale Islamic terrorist attack on American soil.

The explosions killed three people, including an eight-year-old boy, and wounded more than 260 others.

The two brothers also murdered an MIT policeman while trying to escape authorities and, four days after the bombing, had a shootout with law enforcement — during which Tamerlan detonated an explosive device.

Tamerlan died in the shootout. Dzhokhar initially eluded police but was captured later that same day. He told interrogators that, while on the run, he and his brother had decided “spontaneously” to go to New York City to bomb Times Square.

In April 2015, Dzhokhar was convicted of 30 charges — many of which potentially carried the death penalty — including use of a weapon of mass destruction. Two months later, Tsarnaev, now 27, was sentenced to death.

There’s certainly one conclusion to draw from this story: Tsarnaev deserves lethal injection.

And yet, on Friday, a federal appeals court overturned Tsarnaev’s death sentence, ordering a new trial to determine whether the convicted murderer and terrorist should be executed.

In a ruling that enraged some victims, the US Court of Appeals for the First Circuit ruled that the judge in the 2015 trial “did not meet the standard” of fairness while presiding over the process to select a jury.

“A core promise of our criminal justice system is that even the very worst among us deserves to be fairly tried and lawfully punished,” wrote Judge O. Rogeriee Thompson, who added, “Just to be crystal clear … Dzhokhar will remain confined to prison for the rest of his life, with the only question remaining being whether the government will end his life by executing him.”

In other words, the ruling doesn’t affect or overturn the convictions, just whether Tsarnaev will be executed.

The court made its decision after finding that at least two of the 12 jurors didn’t fully disclose what they knew about the case or how they discussed it on social media before they were chosen to be jurors.

Now, the Department of Justice has three options: Return to court to persuade a jury to sentence Tsarnaev to death again, appeal the ruling and hope a higher court restores the death sentence, or no longer pursue the death penalty, knowing Tsarnaev will remain in prison for the rest of his life.

The appeal’s court ruling is logical and understandable on the one hand but shameful and pointless on the other. There’s nothing to retry here in the court of law: Tsarnaev confessed to everything. His guilt is beyond a reasonable doubt. And worst of all, the attack — a vicious act of true savagery — was planned. Now victims and their families may be dragged back to court, forced to relive their nightmare.

As Patricia Campbell, whose daughter Krystle was killed in the bombings, said of the new ruling, “The government’s just wasting money. [Tsarnaev] should be dead by now for what he did.”

The appeals court must also be aware of how high-profile this case was. Not to mention certain segments of the media disgraced themselves by treating Tsarnaev like a rock star. Recall how Rolling Stone put him on their cover as if he were a celebrity. At this point, how is every member of a 12-person jury supposed to have no Facebook posts or strong opinions or deep knowledge of the case?

Most important, Tsarnaev is not a regular criminal. He is an Islamist terrorist, a member of the global jihadist movement.

Tsarnaev and his brother attended a Boston mosque associated with the Islamic Society of Boston (ISB), which has several connections to the Muslim Brotherhood and terrorists, some of whom are in jail.

ISB’s founder, Abdulrahman Alamoudi, is a known Muslim Brotherhood operative and al Qaeda financier who is currently serving a 23-year prison sentence for facilitating an assassination plot against the crown prince of Saudi Arabia at the time.

One well-respected congregant of ISB, Aafia Siddiqui, was known as “Lady al Qaeda” for raising money for the terrorist group. She also opened fire on FBI agents, was arrested in 2009 in Afghanistan, and was planning a large-scale attack on New York City. She received 86 years in prison.

The trail doesn’t stop there. Several other terrorists, Muslim Brotherhood operatives, and al Qaeda or ISIS propagandists have been associated with ISB, many of whom have carried out, supported, or caused violence against innocent civilians.

Moreover, ISB’s second mosque, in Roxbury, Massachusetts, was funded by millions of dollars from Saudi Arabia. One of the founding trustees was Yusuf Qaradawi, the spiritual leader of the Muslim Brotherhood who is wanted by Interpol for incitement to murder.

ISB has a system in place in its mosques to indoctrinate people to believe in jihad and the Muslim Brotherhood’s teachings. It shouldn’t be surprising, then, that the FBI concluded that Tsarnaev’s use of “al Qaeda-inspired rhetoric” indicated “others might have radicalized [him].” Indeed, Tsarnaev’s writings discussed jihad, martyrdom, and all the typical hallmarks of Islamist extremists.

All the evidence of course proves that Tsarnaev and his brother planted those bombs at the Boston Marathon. But the evidence also suggests they carried out the attack because they were indoctrinated to believe it was their religious duty to do so.

When someone takes up arms against the United States, they become an enemy combatant. That means forfeiting their protections under the Constitution and rights of citizenship. There’s a reasonable argument to be had about whether Tsarnaev should be viewed as an enemy combatant similar to, say, Anwar al Awlaki, an American citizen who actually joined al Qaeda and served as a senior recruiter.

But if America is serious about waging a war against Islamist terrorism and the global jihadist movement, which seeks to destroy Western civilization and impose a caliphate, then it must rethink how it prosecutes American citizens who are terrorists.

In short, Tsarnaev deserves the death penalty and should be executed. This would be the case if he planted those bombs for any reason, but because he did so as a jihadist, he is also a threat to American national security.