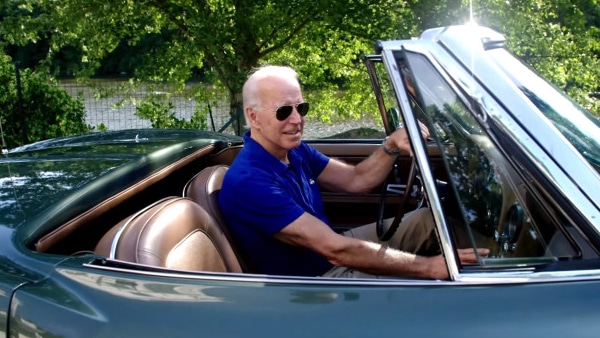 In a recent campaign ad, presumptive Democratic Presidential nominee Joe Biden is seen behind the wheel of a vintage corvette, revving the engine, sporting his iconic aviators, and racing down a narrow road. Although some would have been all too quick to label this as an obvious display of toxic masculinity, Biden used the video to further his new campaign agenda, ‘Buy American.’

While showing off the sports car’s different components, Biden remarked, “This is an iconic industry – How can American made vehicles no longer be out there?” Perhaps they are no longer “out there” because of liberal trade agreements, such as the North American Free Trade Agreement (NAFTA) , which Biden voted for while serving in the U.S Senate in 1993.

As Speaker Gingrich explores at greater length in Trump’s America: The Truth About Our Nation’s Great Comeback, automotive manufacturing jobs between 1994 and 2017 dropped from 1.1 million to 940,000. Industry-wide manufacturing jobs also decreased from 16.8 million in 1993 to 12.5 million in 2017. Had President Trump also not withdrawn the U.S from the Trans-Pacific Partnership in 2017, America’s domestic industries could have been thrown to the wayside even further.

Within the presumptive nominee’s ‘Build Back Better’ strategy, the former VP intends to invest nearly $300 billion in American R&D projects, with an additional $400 billion being allocated to federal procurement spending in an attempt to create and restore jobs lost during the COVID-19 pandemic, particularly in manufacturing. Where was this same optimism in 2010 following the 2007/8 Recession when Biden stated, “there’s no possibility to restore 8 million jobs lost in the Great Recession.”

In seeking to target President Trump’s monumental Tax Cut and Jobs Act of 2017, Biden intends to garner the necessary funds for his ambitious investment project by engaging in deficit spending and raising corporate tax rates. He’s hoping to collect nearly $4 trillion. In promising to bring back Obama era tax policies, which also include increased capital-gains taxes and doing away with many of the estate tax exemptions, the Tax Foundation estimates that Biden’s plan, “would reduce the size of the economy by 1.51% over the long run and lead to 585,000 fewer full-time equivalent jobs while lowering after-tax income for all income quintiles.”

As if he could not dig himself down a deeper hole, Biden asserted towards the end of the ad that, “I believe that we can own the 21st century market again by moving to electric vehicles.” A bold statement considering how America’s chief electric car manufacturer, Telsa, and its CEO, Elon Musk, have been at odds with Democratic controlled local governments since the COVID-19 pandemic first began.

From the driver’s seat of his convertible, Biden, as well as the Democratic Party at-large, have their work cut out for them as they try to reconcile with their previous views on American manufacturing and appease to their wealthy “coastal elite” donors.