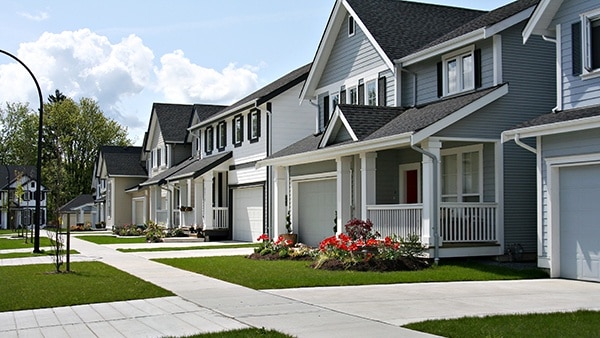 The longer former Vice President Joe Biden stays hidden in his basement, the further away he gets from everyday Americans.

Only the left can get to him in his basement, and the result is a steady slide to politically disastrous positions.

His most recent attack on the American people was his endorsement (or borrowing) of the Cory Booker-James Clyburn plan to use the federal government to destroy the suburbs by forcing changes imposed by Washington bureaucrats. The plan would seek to diversify American suburbs by withholding federal dollars from communities which do not change local zoning ordinances to accommodate denser housing.

Now, this policy is opposed by 65 percent of all Americans, with just 23 percent favoring government playing a role in diversifying neighborhoods, according to Rasmussen Reports. Among Democrats, 56 percent say it’s not the government’s job to dictate local community plans – along with 73 percent of Republicans and 68 percent of independents.

As Andrea Widburg wrote in American Thinker this month:

“People of all races, colors, and creeds move to the suburbs for the same reasons: Single-family homes with big gardens on wide streets that have minimal traffic and quality, safe schools that aren’t too far away from home. It’s all about raising children where they can safely play outdoors and get a good education. These things, of course, are the opposite of what one finds in a densely populated city.”

Of course, the tremendous increase in violence in big cities and the collapse of unionized bureaucratic schools have increased the desirability of moving to the suburbs.

Despite this near 3:1 majority against his policy, Biden would require any state getting highway grants to develop a program to change zoning, so it is more “inclusionary.”

As Sen. Booker’s website explains, the states “could choose to reduce restrictions on lot size, eliminate parking requirements, or allow accessory dwelling units and multifamily homes. These actions would allow for the construction of greater housing density… Municipalities could also institute a ‘density bonus,’ which allows developers to build more units if a portion of them are maintained as affordable housing units.”

Biden indicated his support for government imposed suburban change on his website. Biden would:

“Eliminate local and state housing regulations that perpetuate discrimination. Exclusionary zoning has for decades been strategically used to keep people of color and low-income families out of certain communities. As President, Biden will enact legislation requiring any state receiving federal dollars through the Community Development Block Grants or Surface Transportation Block Grants to develop a strategy for inclusionary zoning, as proposed in the HOME Act of 2019 by Majority Whip Clyburn and Senator Cory Booker.”

Rupert Darwall made crystal clear how out-of-touch with suburban reality the radical Democrats are in an Aug. 10 article entitled, “The Democrats Put the Suburbs — and Family Life — on the November Ballot.” He wrote the piece shortly after President Donald Trump rescinded a similar diversity rule from the Obama Era. In response, Connecticut Sen. Chris Murphy called President Trump “a proud, vocal segregationist” in a tweet. As you can imagine, the Twitter mob parroted Murphy.

But, as Darwall wrote: “Somehow, Democrats still see the suburbs as racially homogenized, lily-white enclaves — something they haven’t been for a long time.” Citing a study by Joel Kotkin and professor Alan Berger, Darwall pointed out that far more Americans live in the suburbs than in city center (151 million versus 25 million). More importantly, he wrote “a majority of African-Americans in the nation’s 100 largest metropolitan areas live in the suburbs. More Hispanics have been moving to the suburbs than whites, and the Asian population in suburban areas is growing nearly twice as fast as that of Asians living in inner-city cores.”

So, the foundational Democratic argument that our suburbs aren’t diverse is baloney. But Darwall got to something more important. This desire by Democrats to control our neighborhoods seems to have more to do with contempt for suburban voters who don’t go along with radical agendas. Darwall pointed out that when President Obama spoke on this topic, he rarely – if ever – used the word “suburb.”

“‘When it comes to development, it’s time to throw out old policies that encouraged sprawl,’ [Obama] told the U.S. Conference of Mayors in January 2010. Sprawl. Note the word. That’s how progressives chose to describe where most Americans live and many others aspire to live. It’s the housing equivalent of Obama’s clinging-to- guns-or-religion comment or Hillary Clinton’s ‘basket of deplorables’ remark.”

This all comes from a real belief held by many elitist Democrats that most Americans are misguided or ignorant and must be guided and directed by their enlightened leaders in Washington DC.

Just consider the case of Westchester County, New York. The Obama-Biden administration tried to use Westchester as a petri dish for its community-building scheme – never mind that at the time Westchester was already the fourth most diverse county in the state.

In a 2013 speech, County Executive Rob Astorino described how the Obama-Biden government bullied local leaders there to enact the federal over-reach:

“The Federal government has a very different agenda and vision for Westchester.  In fact, HUD calls us, its ‘grand experiment.’ That means Washington bureaucrats, who you will never see or meet, want the power to determine who will live where, and how each neighborhood will look. Now what’s at stake is the fundamental right of our cities, towns and villages to plan and zone for themselves. This ‘home rule’ is guaranteed by the New York State Constitution. HUD thinks it can trample on Westchester, because it has the misguided notion that zoning and discrimination are the same thing. They are not. Zoning restricts what can be built, not who lives there.

Astorino concluded: “It all comes down to this: HUD thinks that Westchester is some kind of ‘grand experiment.’ That it can strip away our constitutionally protected rights. And that it can dismantle local zoning. I say Westchester is our home – not a test tube. I say Westchester residents didn’t stop becoming American citizens the day the deal was signed in 2009. And, I say nothing gives HUD the right to turn the American Dream upside down.”

The fight over the suburbs is going to be a fight over whether Biden’s Washington bureaucrats can dictate how to change every neighborhood in America without regard to the wishes of the people living there.

It will be a decisive choice between a Washington-based bureaucratic dictatorship and local freedom.

As usual, Biden will likely be in the basement – but supporting the Washington bureaucrats. President Trump will stand with the suburban Americans who are being threatened.