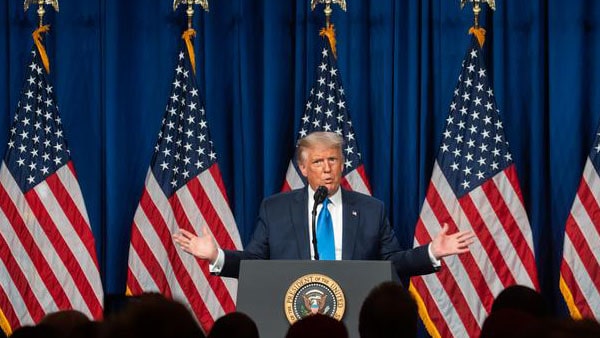 As someone who has been watching conventions since 1956, I think this was the most historically effective convention of my lifetime. Chairwoman Ronna McDaniel deserves a lot of credit for organizing, managing, and presiding over an amazingly complex operation. The Republican National Convention simply dwarfed the Democrats’ convention in scale, complexity, and people participation.

The range of people, the emotional power of individual stories, and the consistent small interventions by the president during the first three days were incredibly effective. The weaving together of past achievements, historic American values, a bold exciting future, and the impossible radicalism of Joe Biden and the Democrats was masterful. All this combined to lay out the panorama of the 2020 choice.

The members of the anti-Trump propaganda media were blind to what they were watching. If anything, their pettiness in complaining about various events was a further condemnation of their complete loss of any sense of balance.

After an eloquent and heart-felt speech by First Lady Melania Trump from the Rose Garden, (she is returning it to the Jackie Kennedy design) some on the left attacked her for her accent. Bette Middler stirred up a storm of criticism when she tweeted “Oh, God. She still can’t speak English.” Of course, if anyone on the right mocked an immigrant for his or her accent, it would be immediately condemned as xenophobia and bigotry. But the Left is so deranged, it can’t remember what it believes when it has a chance to attack President Trump and his family.

A young man who lost the use of his legs in a car wreck – the youngest potential congressman in 200 years, Madison Cawthorn – ended his speech by standing with the help of a walker to show he believed people should stand for the National Anthem. Some on the Left went crazy. As Mollie Hemingway tweeted: “If you thought, ‘certainly nobody could attack this man in a wheelchair for standing up at the end of his speech,’ you haven’t met our completely insane White House press corps, currently viciously attacking a paralyzed man for not sharing their far-left political views.”

Vice President Mike Pence did a great job reasserting American patriotism, the importance of the American flag, and the profound meaning behind “land of the free and home of the brave.” Fort McHenry was an inspired choice for his speech.

According to the propaganda media, President Trump was somehow cheating by using the White House. They apparently forgot that President Franklin Delano Roosevelt accepted the Democratic nomination for a third time in 1940 from the White House.

The GOP convention prime time speakers were almost a decade younger on average than the Democrats’ a week earlier. The range of ethnic diversity was beyond anything any prior Republican convention had achieved. The number of everyday Americans – from lobstermen, farmers, industrial workers, small business owners, and police officials – was dramatically larger than any former Republican convention.

The number of African American speakers who repudiated Democratic attacks alleging the president is a racist  — and championed his policies as having helped minority communities – was compelling. I think we will see significant support for the president in November because of it.

Throughout the convention, the Trump children did a great job of personalizing their father and recognizing his accomplishments. Ivanka Trump perfectly set the stage for his acceptance speech.

Finally, the President’s speech was more like a State of the Union than a traditional rah-rah convention speech. I think this made it more effective in the long run.

This was an incumbent president sharing with the American people his understanding of what had been accomplished, what was worth fighting for, and what he would accomplish if re-elected. It was a serious, adult speech. What some reporters thought was flat or uninspiring I thought was Eisenhower-like in its calm, common sense language.

This was a controlled, serious, thoughtful, and eminently presidential Trump – exactly what his critics had called for over the last three-and-a-half years. It confused them when they actually experienced it.

Karl Rove did a great job analyzing the 74-minute speech on Fox:

“He went after Biden but out of the 5,000 words, 564 are divided and devoted to going after the Democrats — 10 percent of the speech. So you know, [it was] a relatively small portion of it, though it was effectively written and grabbed our attention. Interestingly enough, the second term agenda was 401 words. That was 7 percent. The biggest part of his speech was devoted to a defense of traditional American values, patriotism. The second biggest portion was devoted to promises made, promises kept – 956 words. And law and order was third – 831 words devoted to that one issue. Six-hundred-thirty-six words devoted to the COVID response.”

So, with the White House as the backdrop, the president outlined his achievements, values, and hope for the future. He also drew a sharp contrast with Biden.

The choices have been made clear by the Democratic and Republican conventions.

As someone who said throughout 2016 that Donald Trump would win, I am confident after these two weeks that if everyone who is for him turns out to vote, President Trump will win by an amazing margin. At the same time, Mitch McConnell will gain seats in the US Senate, and we will be addressing Speaker Kevin McCarthy in January.

These two weeks sealed the deal, and now it will be played out in the campaign.