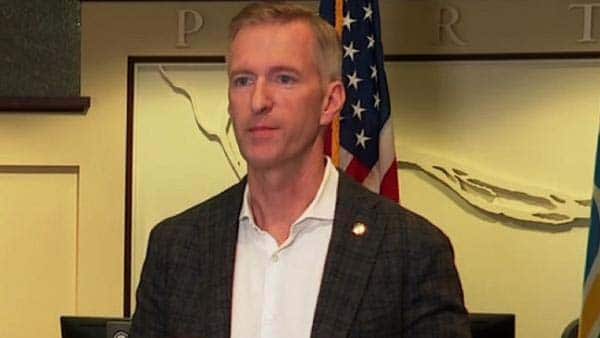 Watching Portland Mayor Ted Wheeler’s agonizingly painful and humiliating press conference Sunday night, I was reminded that liberals simply have no capacity for dealing with reality when it comes to violence at home or abroad.

Here is a mayor who has presided over 90-plus consecutive nights of violence in the city which has the most active Antifa faction in the country. Stores have been invaded, buildings have been burned, police have been injured, while the Portland city government and the Oregon state government have been relentlessly incompetent and ineffective.

On Saturday, a supporter of President Donald Trump was killed by the left-wing activists. Apparent Antifa members there practically celebrated his murder.

Faced with this grim reality and the very real threat that the violence could escalate and a lot more people could get hurt or killed, the mayor went on a tirade attacking President Trump. The mayor was reduced by his ideological straight jacket of avoiding effective force into pathetically appealing – in a 45-minute press conference – for people to quit being violent.

This might have been understandable 94 days ago when the first violence occurred. But having the mayor begging people to be nice after more than 13 weeks of nightly violence is a sign of serious, deep derangement.

Mayor Wheeler’s commitment to opposing the violent with appeasement and groveling is made even more bizarre by the reality that in Minneapolis, Kenosha, and elsewhere, the National Guard has suppressed violence rather than placated it.

In city after city, we are watching liberal Democratic city governments fail in their first duty – to protect their fellow citizens.

If the failure was only in one or two cities, you could blame the personalities. Mayor Bill de Blasio, the worst big city mayor in the entire country, could be pushing New York City into a downward spiral of violence because of personal incompetence.

However, when the collapse of safety and explosion of crime are occurring in city after city (with the singular common thread that they are run by liberals who attack and defund the police while pandering to and protecting criminals) it is obvious we are dealing with a systemic problem, not a personality problem.

The fascinating thing is that liberal Democrats have the same problem dealing with violence and predators overseas that they have at home. Whether it is a foreign predator or a domestic predator, liberals simply can’t be honest identifying threats – or acknowledging the scale of the threat they represent.

Faced with a violently anti-American dictatorship in Iran, which the American State Department said was the leading state sponsor of terrorism in the world, the Obama-Biden team sent Iran more than a billion dollars in cash and billions more through banks.

Faced with a rabidly anti-Western ISIS, Obama called them “the junior varsity” and then did nothing as they took over a large area in Syria and Iraq.

The Obama-Biden strategy for Cuba, Venezuela, and Nicaragua enabled those dictatorships to grow even stronger and bolder.

The Obama-Biden strategy of placating the Chinese Communist dictatorship and sending Vice President Biden to make speech after speech praising their achievements as a dictatorship emboldened General Secretary Xi Jinping to push harder on every front (from stealing our secrets, to setting up concentration camps, and to aggressively developing China’s military investment in the South China Sea).

The No. 1 outcome of the killing of an American Ambassador in Benghazi was to send the national security adviser out to lie to the American people for a week. It was as though the American people rather than the terrorists were the opponents of the Obama-Biden Administration.

Having looked for several decades at this liberal inability to deal with predators and evil whether domestic or foreign, I finally concluded that liberals thought the Lion King was a documentary.

The Lion King is a great show. We took our grandchildren to see the Disney World and Broadway versions. It is a remarkable movie. It deserves its amazing success.

However, liberals seem to think it is nonfiction.

They behave as though predators, foreign and domestic, are like the lions, zebras, wart hogs and other good friends in the Lion King.

That seems to be the rationale behind the George Soros-funded district attorneys who refuse to prosecute crimes.

That seems to be the rationale behind a generation of elected mayors and city councils who can consider defunding or even disbanding the police in the middle of crime waves and riots.

It would be a great experiment to invite a group of hard-core liberals to watch a lion documentary rather than the Lion King.

Imagine the liberal horror at learning that lions love zebras and wart hogs – but it is because they like to eat them.

Imagine Mayor Wheeler begging a real lion to be friendly and pleasant and avoid violence.

The rule of law requires the ability and willingness of courageous people to stop evil – not just beg it to be nice.

The core of the debate this fall is not about law and order, it is about the nature of reality.

Liberalism cannot bring itself to confront the reality of predators and evil. That is why again and again it finds itself presiding over domestic and foreign disasters.

Mayor Wheeler’s press conference Sunday night was a pathetic reality of just how far liberals will go to avoid reality.