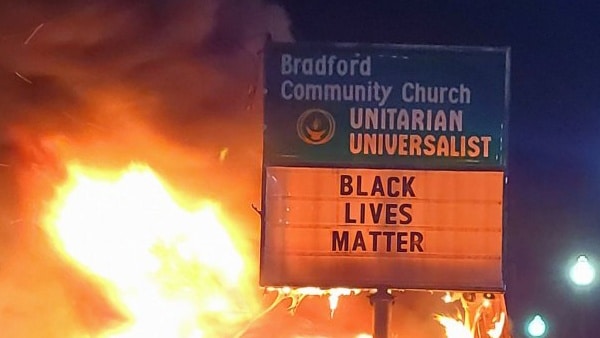 The level of violence we are seeing around America cannot be understood and analyzed as a normal event within a free society.

Kenosha Police Chief Daniel Miskinis reports that of the 200 people arrested in Kenosha so far more than half were from out of the city. In fact, those arrested and processed have been from 44 different cities.

In Portland, 50 years of pro-radical mayors have led to 97 straight nights of violence culminating in the deliberate killing of a supporter of President Donald Trump. Mayor Ted Wheeler’s press conference was a classic case of pathos and weakness. It’s no use begging people to quit being violent when it is clear they are deliberately being violent. Parts of downtown Portland are controlled by Antifa and its allies, and they have repudiated the rule of law in favor of the rule of their anarchist violence.

In Seattle, the mayor’s “summer of love” turned into murders and destruction as a significant part of downtown Seattle had effectively seceded from the city and was run by local radicals based on their own use of force. It took weeks for the city’s radical leadership to clear the blocks, and weeks more to deal with the destruction left behind.

In Chicago, the mayor had already lost control of most of the Southside to random criminals and a horrifying murder rate of children and innocent adults. Then, she lost control of the highest value retail streets in the city as the mob looted. The best the police could do was to draw up bridges and try to make it hard for the violent looters to get into the highest value stores. Now she has diverted police resources to blocking off the street her house is on so at least she is relatively safe.

In New York, the police department budget cuts, constant attacks on the police, passage of a no cash-bail law (which effectively automatically puts criminals back on the street) have all combined to make the city so dangerous that people are moving out in record numbers.

In our national capital, people leaving the White House after the president’s speech last Thursday night found themselves running a gauntlet of vicious and sometimes violent anti-Americans. The case of Sen. Rand Paul and his wife being harassed and threatened has gotten a lot of publicity. Even more disturbing was the harassment of Alice Johnson, the 65-year-old African American who was granted clemency by President Trump last year, and Georgia Legislator Vernon Jones, who has opposed mob violence throughout the country. A group threatened them, called them vicious names, and tried to intimidate them.

Remember, a terroristic threat is a crime. Assault and battery require a physical attack. A charge of terroristic threats requires that your words indicated a willingness to do eminent harm. All these intimidating attacks should be subject to prosecution.

With all this happening, what do you think is going on?

We are living through an anti-American insurgency with roots in the 1960s – and with many parallels to the violence of the late 1960s and early 1970s. In that era, there were more than 2,500 bombings in the United States in an 18-month period between 1971 and 1972. There were violent rebellions on campuses. There were armed robberies and guards killed in the name of “the revolution.” There was a Black Panther movement publicly trying to kill police. When society finally had enough – and the forces of civilization were directed to identify and arrest the violent and the advocates of violence – the movement was fairly rapidly suppressed, and the violence ended.

The new anti-American rebellion is better organized, better connected, more widespread, and has a lot more strategic thinking than its precursor in the 1960s.

Historians will marvel at the resilience of the anti-Americans and the diligence with which they worked for the last half century to infiltrate American campuses, newsrooms, and the political class. The result is a much more sophisticated, better resourced, and more strategically planned set of activities designed to cripple and undermine the American system.

We are living through a series of assaults on American society. The classrooms undermine and discredit the idea of America. Most of the propaganda media denies the scale of violence happening – and whenever possible blames either the police generally or President Trump specifically.

Peaceful demonstrators play the role that Lenin described as fellow travelers. They don’t go around looting, destroying, and burning – but they provide the cover for those who do.

The violent come in several forms.

Some are hardened Antifa-style revolutionaries who are openly committed to destroying America and eager to be violent anywhere, anytime, and for any excuse.

Some are opportunists who enjoy bullying and dominating and get a kick out of hurting and intimidating others (watch the mob behavior in pressuring others to do what they are told or face consequences including physical attack).

Some are genuine organized criminals who profit from joining the supposedly peaceful demonstrators until they come to a store window and have a chance to loot. The amount of stolen property is astonishing. Now, a book, In Defense of Looting, comes along to legitimize theft and destruction – and National Public Radio puts the author on the air to explain the pro-looting position. (NPR has since re-worked the story after being criticized for promoting criminal behavior).

Finally, other random criminals can become more predatory and violent because the riots and demonstrations have pulled the police away from neighborhoods. The innocent and the unprotected can be preyed upon safely while the police focus on centers of looting and burning.

The inability of the police to protect the innocent is made even greater by the Left’s commitment to defund the police – and constantly bombard them with hostility and verbal attacks.

Furthermore, strengthening the police will not work if the district attorneys and judges refuse to lock up the violent and predatory people who are arrested. George Soros has poured millions into electing radical leftwing prosecutors who simply refuse to prosecute criminals. When predators know there are no costs to their crimes, they are emboldened to become even more aggressive and violent. I wrote about all of this in my new book Trump and the American Future.

The new, greater sophistication of the anti-American left has created a guerrilla war movement across America.

This is truly a war between the forces of civilization and the forces of anarchy and tyranny (historically, anarchy is quickly replaced by tyranny).

Those of us who believe in civilization and the rule of law simply must win, or America as we know it will cease to exist.