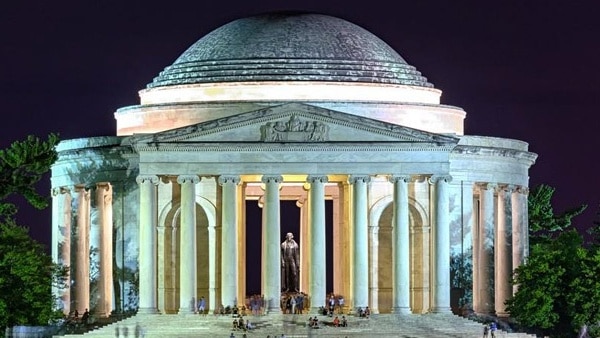 Hence the toppling of statues and the desecration of monuments.

But the woke mob is not alone — and has support in high places.

The committee also identified some of the Founders as “persons of concern” for their “disqualifying histories, including participation in slavery, systemic racism,” and more. The list included Benjamin Franklin — yes, the ardent abolitionist.

The idea here is to move forward in history and leave the barbaric past behind, to progress toward a more just and enlightened future — thus the term “progressive.” In fact, history is already heading there, according to this ideology; we just need to make sure we’re on the right side and help push it along.

John Micek, the editor–in–chief of the Pennsylvania Capital-Star, captured this expectation of progress quite well in a recent column.

“As much as [President] Trump has tried to move the country backwards, putting up walls, withdrawing America from the world stage, and hearkening back to a segregated past, [Kamala] Harris is a living reminder that the arc of history is always forward-moving,” Micek wrote. “[Harris is] America as it is now and will be in the decades to come. Trump is an unpleasant chapter the country can’t move past quickly enough.”

Progressives believe history is going somewhere — specifically toward a form of utopia in which human beings are better and the ills of the past can be overcome. To get there, we need to implement — through government, of course — various measures in the name of progress. Such measures could include Obamacare, or a coerced redistribution of wealth, or, in more extreme cases, the subjugation and elimination of certain groups.

What undergirds this ideology is a belief — whether conscious or subconscious — that human nature can change and improve, however one defines “better.” In other words, human nature is not constant, and man can conquer and overcome it. Without this fundamental idea, the theory of progressivism collapses.

The progressive worldview is understandably appealing but has one major problem: It’s wrong. Indeed, human nature is both perpetual and dangerous. For evidence, look no further than the last century.

According to the author David Berlinski, some 231 million men, women, and children died violently in the 21st century. Two world wars, the Holocaust, the killing fields in Cambodia, Soviet and Chinese slaughter, oppression, and incompetence — it is simply impossible to study this period in any serious, objective way and come away seeing human progress.

And today? We often preach about equality and human rights, but slavery still exists. Some countries even force innocents into concentration camps — and in the case of China and the Uighurs, many don’t seem to care.

We also like to think new technology is changing the world for the better. But social media is fostering more tribalism than unity, and hostile regimes are using high tech to make old forms of oppression more effective and efficient.

In short, we are no better or different than our forebears from 5,000 years ago, who would act just as we are today if they were around now. And we would act just as they did then, if we were alive at the time.

Here we get to the simple genius of America’s Founders, who closely studied human nature and rejected the progressive view of it. They instead saw man as eternally flawed. To paraphrase James Madison, men are no angels.

The Founders therefore created a Constitution that accepted human nature as it was and would always be. They actually assumed there would be conflict within the government, that people would nakedly pursue their own political interests. They also understood that humans would unite around common interests and form “factions.”

So, the Constitution includes checks and balances, federalism, enumerated rights, and the separation of powers to keep the government within its bounds. Such a system of government prevents the centralization of power and the ability of some factions (even a democratic majority) to use the state against other factions.

Or, as Madison explained in The Federalist Papers, “Ambition must be made to counteract ambition. The interest of the man must be connected with the constitutional rights of the place.”

Put less eloquently, presidents and lawmakers can be selfish and ambitious without threatening self-government; in fact, our constitutional system counts on and embraces it, recognizing how to balance such forces.

Thus, liberty can flourish, and individual rights are protected.

True, this all makes for a painfully slow, easy-to-stop system of government that is susceptible to gridlock. And that’s precisely the point. The Founders didn’t want the Constitution to create too well-oiled of a machine. If some piece of legislation is going to hurt a minority group, it doesn’t take much effort to stop it from going through.

The real trouble comes when people think they can improve or overcome human nature, inevitably in order to conquer society’s problems and reach nirvana.

In other words, the progressive idea. This is how a country gets tyranny, fascism, communism, or something trending there.

Remember, radical feminists at Berkeley and woke hipsters sipping lattes in Brooklyn aren’t the only kinds of progressives. Fascists and communists are also, by definition, progressives, just a more radical kind. Hitler and Stalin each had a vision of utopia and thought they had the formula to get there. Such a mindset is impossible for those who view human nature as unchanging, as their ambitions and expectations are inherently limited.

Progressive voices argue the Constitution is antiquated and anachronistic in 2020, advocating instead a more efficient and sophisticated form of government. This is why progressivism is so dangerous: It is based on delusions of grandeur, that someone or a group of people can move past human nature with the right ideals or policies.

These voices miss the simple yet powerful genius of the Founders, who created an enduring system that allows freedom to flourish. Today, America is the freest, richest, and most powerful country in history. It is imperfect and can be improved, of course. But, in a larger sense, what more can people want in a fallen world?