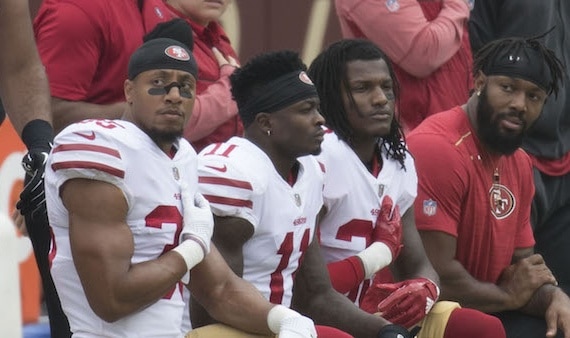 Professional football has attained the moniker of “America’s game” due to its dominant lead in viewership over other professional sports. Virtually all ancillary activities grind to a halt on Super Bowl Sunday as tens of millions of Americans, of all political affiliations, tune in to watch the game.

This year, as we exit a summer marked by racially charged protests and riots throughout the country, the National Football League (NFL) was pressured by left-leaning activists and organizers to show its support to the wave of anarcho-progressivism sweeping the country. However, as the NFL season kicked off last week, the extent to which the organization would disown America’s anthem and her symbols as overtures to the far-left group, Black Lives Matter was a sight to behold.

NFL commissioner Roger Goodell has displayed the moral convictions of a weather vane by changing his stance of kneeling during the national anthem three times. After initially calling President Trump “divisive” for calling on NFL players to stand for the anthem, he later changed his view, stating that players should stand for the anthem and that kneelers threatened to “erode the unifying power” of the game. Most recently, he set the tone for the season by stating that he would support players who knelt for the national anthem. In an interview with Emmanuel Acho, Goodell said, “We have never disciplined a single player for anything with the national anthem and in violation (of the policy) and I don’t intend to. And I will support them.”

Right on cue, before their game against the Cleveland Browns, nearly all players on the Baltimore Ravens team knelt for the national anthem after standing for the rendition of a poem titled “Lift Every Voice and Sing,” which has been proclaimed to be the “black national anthem” by the left’s cultural overlords. On a more Orwellian note, the NFL approved a list of names it would permit players to wear on helmet bumpers, including Jacob Blake, George Floyd, Breonna Taylor, among others. Players could also choose from four phrases: “Stop Hate,” “It Takes All Of Us,” “End Racism,” or “Black Lives Matter” to wear on their helmets. At least pseudo-religious cults are more honest in their propaganda as they ask followers to take the name of an icon or repeat a preferred incantation mindlessly.

If this was not enough, the NFL committed to showcasing the stories of “victim[s] of social or racial injustice or police brutality” in and around the games. These created a dangerous anti-law enforcement narrative based on video clips that lack context and isolated anecdotes. At this moment, two Los Angeles county sheriff deputies lie in critical condition after being shot unprovoked by an anonymous gunman. As they were on death’s door, a crowd of Black Lives Matter activists chanted “We hope they f***ing die!” outside the hospital after several unsuccessful efforts to break into the emergency room. There will be no prizes for guessing whether the NFL wishes those officers a speedy recovery or glorifies the organization hoping for their demise. The heavy-handed vilification of law enforcement is the point where the NFL ventures from pointless virtue signaling to outright moral depravity – and its leaders don’t seem to care one bit.

Some may point out the viewership for this season’s kickoff game declined an estimated eleven percent from last year. They might say this is evidence that economic disincentives will eventually set the league on the right track. Unfortunately, this analysis is misguided for two reasons.

First, the NFL is in the process of negotiating billion dollar contracts with each major network to broadcast its games. This insulates the organization from any temporary ratings setback. Also, not surrendering to the progressive mob carries its own financial liabilities. For instance, the NFL risks being the victim of organized boycotts, endless cycles of bad press, and litigation from left-leaning law firms across the country. Targeted corporate harassment carried out by activist groups on the Left can dissuade potential sponsors and advertisers from doing business with the league. Far from being a surefire route to bankruptcy, going woke might be the financially prudent model for large corporations such as the NFL in our new American dystopia.

Despite their routine condemnation of capitalism and all its alleged excesses, progressive activists understand a fundamental truth about the American market system better than most conservatives. They understand that customer-facing corporations – big or small – such as the NFL cannot withstand a barrage of negative publicity that threatens to sully their names in society or the marketplace. The woke activists relentlessly exploit this weakness, with the aid of a compliant media, to get major corporations to echo their message.

It may shock many conservatives, including Republican politicians, to see a small progressive organizing firm in Brooklyn bully a major company such as Amazon into submission, but they must not underestimate the power of the activist Left.

As things stand now, the average progressive organizing front can change America’s cultural landscape more substantially in a week than the average Republican congressman can in a lifetime. Yes, if you are a conservative, you should be terrified and vote accordingly.