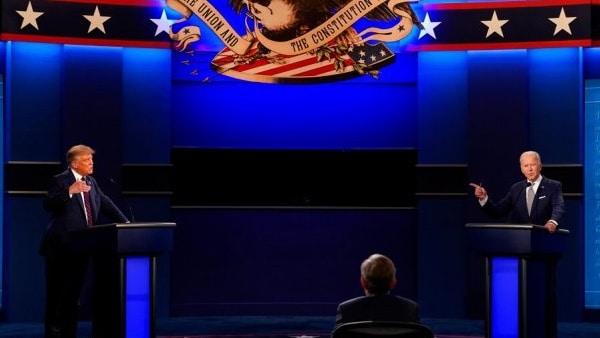 Last night’s first presidential debate was a major disappointment – no matter who you are for.

The number of people who told me today they turned off the debate after 15 or 20 minutes was sobering.

This debate was so bad it justifies asking if we can’t really approach the next three debates from a totally different perspective.

The anecdotal unhappiness and dissatisfaction I have been picking up from a wide range of people was capture by Ben Domenech, who wrote in The Transom: “America Got What It Wanted and It Was Terrible:

“For all the people who are upset about last night’s horrible debate, they should pause and ask themselves: wasn’t that just an accurate reflection of where we are as a nation? Two septuagenarians bashing each other with bursts of bombastic bullshittery and competing whatabouts is the content you will find on Facebook and cable news every single day. To the extent people are disappointed, remind yourself: these men both have nearly 90 percent ratings with the two largest political parties in America. They both bested huge fields of candidates to get their respective roles. This is the show you asked for, and you got it.”

To quantify Ben’s complaint, note that Chris Wallace, the moderator, interrupted the President of the United States 76 times and only interrupted joe Biden only 15 times, by Charlie Kirk’s count. Note that the BBC found Trump cut in on Biden a total of 73 times.

To be fair to President Trump, the one-sidedness of Wallace’s moderating did not give him much choice. Again, to cite Domenech, Wallace’s “choice to engage repeatedly just didn’t work. It resulted in repeated instances of Biden talking for two minutes in which he’d throw out multiple claims about Trump, Trump would interrupt with a rejoinder, Wallace would tell Trump to stop talking, and then at the end of the two minutes Wallace would move on to the next question. Trump, infuriated, would bulldoze him and respond anyway. Biden would interrupt with his denial. And on and on.”

If Trump had to choose between passivity and being a bulldozer, he made the right choice. It may have cost Mitt Romney the presidency when he allowed then-CNN reporter Candy Crowley to assert a controversial rebuttal of Romney’s point on President Barack Obama being slow to recognize the killing of our ambassador in Benghazi as an act of terror. In effect, Romney was being double-teamed by Crowley and Obama almost as if they were a tag team in a wrestling match.

Faced with that kind of moderating, Trump simply blew through it and insisted on making his points. He looked aggressive and contentious doing it, but passivity would have been even worse. As the president said to Wallace, “I guess I’m debating you, not him.”

It is simply a fact that a conservative candidate in a presidential debate must assume he or she will be double-teamed, and the deck will be stacked.

That double-teaming was obvious last night.

However, the nature of the modern news media and the political press – combined with the intensity of the social media – cheats the American people of the kind of serious debate they deserve.

The Commission on Presidential Debates is a big part of the problem. It is a fossilized institution dating back to 1987 and run by politicians a generation or more out of their time.

The most famous debates in American political history were the Abraham Lincoln-Stephen Douglas debates of 1858. They were intelligent, serious, and focused on the great issue of slavery, which was beginning to tear the country apart and leading toward a civil war.

These seven debates were each three hours long. There was a timekeeper, but no moderator.

America is on the verge of, or in the middle of, a series of crises which may determine the survival of our country.

We face a Chinese competitor that will force dramatic changes on us if we are to match and overmatch its capabilities. For example, our infrastructure must be massively rebuilt if we are going to compete with China and other countries which are modernizing.

Our education system is a disaster and needs to be thoroughly overhauled – in k-12, college, and adult education.

We must defeat the anti-American movement which is dominating too many schools and seeking to dominate too many streets and cities.

This year’s disaster with COVID-19 is proof we need a profound overhaul of our public health service.

We must rebuild our cities in an inclusive model that eliminates the sense of racial conflict and provides every American of every background a real opportunity to learn, work, live safely, and give our children and grandchildren an even better future.

We must get back to the tempo of economic growth, which in February had given us the lowest African American and Latino unemployment rates in history and had begun to raise the income for the poor at a faster rate than for the wealthy.

Finally, once we have defeated COVID-19, we must develop a fiscal plan to move us back to the balanced budgets we achieved in the late 1990s.

With all these vast challenges, surely it should be possible to invent a dialogue, discussion, or debate between the adults who are seeking to be lent power by their fellow citizens.

Let’s see if we can start this theme with next week’s vice-presidential debate.