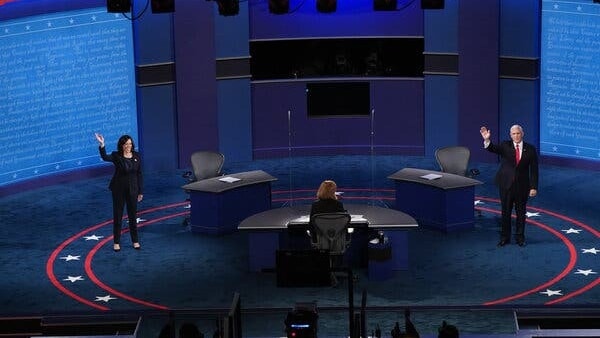 The first presidential debate was a fast-moving clash of personalities – with a lot of clutter and confusion.

The vice-presidential debate can move more slowly and be more informative in clarifying the difference between the two tickets.

The contrast between Vice President Mike Pence’s Indiana conservatism and Sen. Kamala Harris’s San Francisco radicalism is so great that this should be a debate focused on issues far more than personalities. The stage is set for a truly historic encounter.

Vice President Pence believes in the historic America of the Declaration of Independence, the Constitution, and American history. Sen. Harris is allied with the radicals who want to dramatically change America and who repudiate the Founding Fathers and the basic events which created America.

Harris’s radicalism was obvious when she said to Steven Colbert about the demonstrations and riots:

When the Los Angeles mayor cut $150 million from the city police budget Harris said, “I applaud Eric Garcetti for doing what he’s done.”

By contrast, Vice President Pence strongly favors supporting police and locking up criminals. He has worked with President Donald Trump and Attorney General William Barr on Operation LeGend and other federal efforts to arrest and prosecute violent criminals. Meanwhile, Harris supports efforts to get criminals out of jail. In June, Harris advocated for the public to fund bail for arrested suspects implicated in the George Floyd riots in Minneapolis. “If you’re able to, chip in now to the @MNFreedomFund to help post bail for those protesting on the ground in Minnesota,” Harris tweeted.

When she was asked about her support for convicted felons and other prisoners voting from jail – and whether that would include the Boston Marathon Bomber while he is on appeal from his death sentence – she refused to rule it out, saying, “I think we should have that conversation.”

Vice President Pence supports giving patients more choices and control of their health care and coverage. The Trump administration is delivering on that promise with price transparency to create competition that will lower costs. Pence is for expanding the variety of health plans available to consumers (so they can pick a plan that best suits their needs), empowering patients to choose doctors independent of their insurance coverage, reducing the cost of drugs with more generic options, and ending kickbacks to middlemen that drive up prices.

In contrast, Sen. Harris is a firm believer in turning over more power and control over your health care to the government. She supported — and then backtracked — forcing everyone onto a single, government-run health care plan. But even her supposedly evolved position doubles down on Obamacare’s failures with one-size-fits-all health care plans, higher taxes, and more government control.  It will lead to longer wait times for worse quality health care.

Vice President Pence is strongly pro-life while Sen. Harris is committed to repealing the Hyde Amendment which protects taxpayers from having to pay for abortion. She would support tax paid abortions – and it is not clear if that would include in the ninth month as many Democrats advocate.

Vice President Pence is a strong supporter of the right to bear arms and the Second Amendment. Sen. Harris has a robust plan for dramatically limiting the right to own guns.

Vice President Pence strongly supports constitutional conservative judicial nominees for federal courts and has supported all three of President Trump’s pro-constitution nominees to the US Supreme Court. Sen. Harris was the most vicious questioner of now-Justice Brett Kavanaugh during his confirmation hearings. She has opposed all three conservative nominees. She and Vice President Joe Biden refuse to issue a list of the kind of justices they would appoint to the Supreme Court.

Parallel to their opposite positions on judges, Vice President Pence believes in protecting our religious liberties under the First Amendment while Sen. Harris would sue nuns for not supporting a pro-abortion agenda. Harris’ hostility to Catholics came out when she challenged one court nominee about his membership in the Knights of Columbus. She implied that if he was a faithful Catholic, he couldn’t serve on the Court. She is simply the most bigoted anti-Catholic nominee of a major party since the late 19th century.

Vice President Pence is a strong supporter of hydraulic fracturing, which has given America energy independence, created millions of jobs, and lowered the cost of energy. Sen. Harris on CNN said “There’s no question I’m in favor of banning fracking, so yes. And starting — and starting with what we can do on day one around public lands, right? And then there has to be legislation, but yes — and this is something I’ve taken on in California. I have a history of working on this issue. And to your point, we have to just acknowledge that the residual impact of fracking is enormous in terms of the impact on the health and safety of communities.”

Finally, where Vice President Pence is for enforcing our immigration laws, Sen. Harris is for eliminating criminal charges for entering the United States without permission. As she put it on CNN after one of the Democratic primary debates, “it should be a civil enforcement issue, but not a criminal enforcement issue.” Furthermore, she would provide government health care and free education for all immigrants in the country illegally, asserting “I’m opposed to any policy that would deny in our country, any human being from access to public safety, public education, or public health period.”

The gap between the conservative Vice President and the radical senator from San Francisco is so great this could be a tremendously powerful clash of ideas and policies.