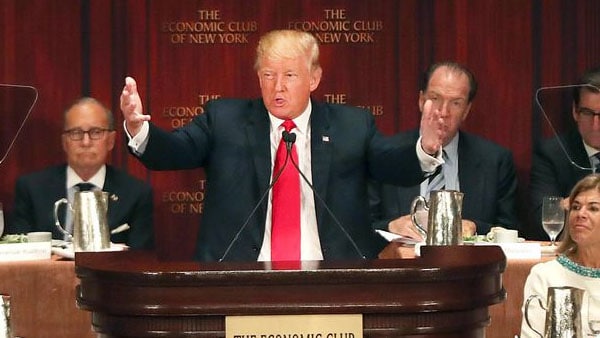 This election is a choice between two different economic futures: a Trump Recovery or a Biden Depression. If Biden is elected, he has promised to raise taxes. President Trump will restore the economy to where we were seven months ago.  Please rate and share the video with your friends, family, and fellow Americans.

This election is a choice between a Trump recovery and a Biden depression. Biden’s plan will crush America.

Well guess what? First thing I do is going to repeal this Trump tax cut, not a joke.

I think in some ways the biggest immediate effect of the choice we’re going to make on election day is between the Trump recovery and the Biden depression. Now you may think that’s strong language, but let me explain why I think it’s accurate and real. The fact is that we had a remarkable period of economic growth and we had as a result, people going to work, coming out of the woodwork.

You know, it’s very clear is that candidate Trump from his many years of business experience already knew what he wanted to do to get this economy rolling. And in fact, he entered office so aggressively with so many good ideas and pushed so hard that even CNN admitted, it had been an amazing start in getting the economy roaring.

Something feels different about the Trump economy. I’ve created over a million jobs, some precedent there’s a momentum and energy. There is a momentum, an energy, a bravado. “The stock market is way up again today. And we’re setting a record, literally it’s as if corporate America wall street and even blue collar workers suddenly have their mojo back.

If you were working in a blue collar job, your salary was going to go up every single year, going up actually at a faster rate than at the very top. So that for the first time we were seeing some significant steps towards easing income inequality. And the result was that the workforce grew. And even though the workforce was getting bigger, the unemployment numbers kept coming down because there were more jobs being created then there were people looking for work.

And so you actually began in some parts of the country to have a significant shortage. By February of this year, we had achieved because of the Trump policies, we had achieved the lowest unemployment rate for African Americans in history, the lowest unemployment rate for Latinos in history, the lowest unemployment rate for women in I think 70 years. All of this was working towards people going back to work, improving their lives beginning to pursue the American dream once again. And the reasons were policy that Donald Trump, with all of his years in the business community, with his understanding of what creates jobs, what gets investments, what leads people to start businesses, how to get entrepreneurs excited, all of that had been brought to bear. And for the first time, since Ronald Reagan, you had an aggressively pro entrepreneur president, and that got entrepreneurs excited. Life was fun. They were making money, they were creating jobs. And then Trump followed a very aggressive policy of going after trading partners who had frankly got deals that were way too easy.

It’s my great honor to announce that we have successfully completed negotiations on a brand new deal to terminate and replace NAFTA and the NAFTA trade agreements with an incredible new US/Mexico/Canada agreement called USMCA.

He started with Canada and Mexico and people said it was impossible, you can’t possibly redo NAFTA, but he did. And in the end, we got a much better deal for American workers, for American farmers, for American companies. We pivoted to our biggest trading partner, China and began to take on what has been the biggest deficit we’ve faced and he’s made progress there. And so all of a sudden you had jobs being created in America than in the past under the Obama Biden policies would have been created in China or in Mexico or somewhere else. All that was up through February. And then with the Chinese virus, COVID-19.

At least six people have died in an outbreak of the new Coronavirus, which has now reached the United States. The centers for disease control and prevention has confirmed the first US case has been detected in Washington state. The patient who is in isolation recently returned from Wuhan China.

In accordance of the declaration beginning at 5:00 PM Eastern standard time, Sunday, February the second, the United States government will implement temporary measures to increase our abilities, detect and contain the coronavirus proactively and aggressively.

The president had to make some very tough decisions, cutting off travel, ultimately closing down a large part of the economy, going to situations that lead to social isolation. All of that created additional difficulties. Fortunately, president of the Congress were able to pass a series of bills that help rescue the economy.

Well, thank you all very much. It’s a very important day outside the single biggest economic relief In American history. And I must say, or any other package by the way.

So that unlike the Europeans who are now wallowing and really long difficult problems, and I’m talking to you from Italy, and I can tell you the challenge in Europe, the challenge in Italy is much greater than the challenge in United States and what’s happening in the U S is we are beginning to see a rebound that is astonishing I think when the 3rd quarter numbers come out the economic growth maybe the highest it’s been outside of World War II in American history. And that’s because all of the various Trump policies coming to bear. And so, we didn’t end up with the kind of unemployment that people projected it was much lower. It didn’t stay the size people thought it would, it went down much faster. And the index of small business confidence has jumped again. People look around and go you know this may work. Now interestingly the further proof of the difference between President Trump’s approach, lower taxes, less regulation, more energy production, better trade deals, and the left’s approach, the places in the US that aren’t recovering very fast well they all have liberal democratic governors. There all states where they follow the wrong policies. They have high taxes, lots of regulations, big bureaucracy, unions that are destructive. The result is you look at where economy is really starting to boom again and where we are seeing unemployment really come down they are almost all red states where in fact they are following very Trump like policies, lowering taxes, less regulation, more activity to encourage the business community. And if you look at where the problem is greatest, places like New York, Illinois, Michigan, California, New Jersey, where the liberal democrats are in charge are anti-business, anti-jobs, want higher and higher taxes, more and more regulations, and they want bigger and bigger bureaucracies so the bureaucrats can join the public employee (?). This gap between red states and blue states I should say red states that are rising and blue states that are stuck, that gap is a perfect model to then think about Biden.

If you look at Obama’s last year in office 2016 GDP growth was 1.6 percent, Trump’s first year in office after he cut taxes, reduced regulations, focused on domestic energy, we went to capitalist free market policies GDP grew to 2.9 percent. That’s an 80 percent improvement in GDP.

When George Stephanopoulos asked vice president Biden would you raise taxes even if the economy stays weak and Biden came back and said I want to raise taxes in January I don’t care what the economy is.

Guess what, you’re not going to have, your taxes are going to be raised not cut.

Because he represents the pro-big government, pro-big union, pro-big bureaucracies’ system and that system needs every tax dollar it can get. Because without it it’s going to collapse. That’s why in Illinois which has had the highest outmigration of any state in the past 10 years, the governor’s trying to raise taxes even through that will drive even more people to leave the state because paying off public employee union allies is more important to him than having businesses and particularly small businesses continue to grow. And I think the real choice here is pretty stark, it’s not like oh we’re inevitably going to have a pretty good economy, this is a real choice between economic collapse and depression with Biden and economic growth and recovery with Trump. Now it’s fascinating, I did a podcast a while back with James Grant who had written a book on the Depression of 1920-21, that depression was a straight V came up here, came straight down, and they recovered straight up. It happened so fast that the cultural memory never captured, people didn’t go around in the 20’s worrying about the depression of 1920-21, it was just an event they got through it. That’s the goal President Trump has he wants to see us, now that we’ve come down, he’s doing everything he can to get us right back up.

We want to be where we were seven months ago. And next year will be one of the best and greatest years in the history of our country this is what’s happening economically, that’s going to lead to other things. This election is a choice between a Trump recovery and a Biden depression. If he gets in they are going to quadruple your taxes.

By having an economic growth, you can save Medicare you can save social security because there is just a lot more money coming in now because you are raising taxes. But because you are putting more people to work who are getting better jobs who have higher incomes and therefore the taxes they pay go up but they are going up because their incomes are going up. The opposite of a tax increase depression. Now what Biden wants to do is virtually everything which is made New York and California and Illinois too expensive. So I just want to take a few minutes and share with you the facts, the data, the reality, what Donald J. Trump accomplished in the first four years. And the real danger that we are going to go back to the Obama Biden years. Remember slowest recovery since the the Great Depression was the eight years of Obama and Biden.

Under the previous administration, it took 30 months to recover more than half the jobs lost from the crisis. We surpassed that milestone in fewer than 5 months.