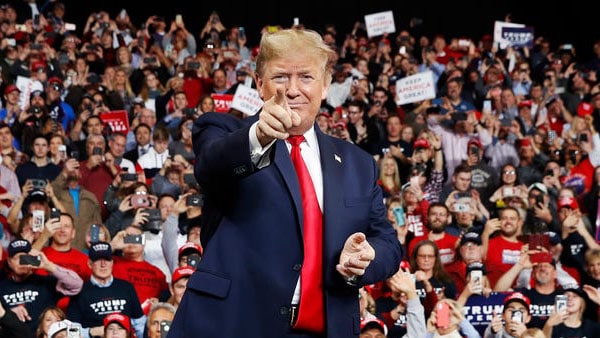 Heading into the final week of the 2020 presidential campaign, virtually all the polls continue to show former Vice President Joe Biden leading President Trump. But polls are hardly an exact science, as we saw four years ago.

In 2016, the polls were mostly wrong. They were wrong in part because pollsters polled Americans who voted in the last two elections, missing those who hadn’t voted in several years — or ever — but came out to support Trump.

Today, many of President Trump’s supporters and surrogates see history repeating itself. They argue the pollsters aren’t accounting for the so-called hidden Trump vote, a bloc of voters comprised of Americans who secretly support the president but won’t say so — until Election Day.

These voters, the argument goes, either fear the social cost of publicizing their support for Trump or just refuse to share their political preferences with pollsters.

This begs two obvious questions: Is there really a hidden Trump vote, and is it large enough to make a difference in the election?

I discussed these questions on the latest episode of my podcast, “Outloud with Gianno Caldwell.” My guest, Pete Hegseth, the best-selling author and co-host of “Fox & Friends Weekend,” explained compellingly why he believes there’s a significant Trump vote, making his case in a way that most people have not considered.

“I see the president winning with a minimum high 270s and possibly going up significantly higher based on just how big this undercurrent is,” Cahaly said recently, referring to Electoral College votes. A candidate needs 270 electoral votes to win the White House.

“What we’ve noticed is that these polls are predominantly missing the hidden Trump vote. There is a clear feeling among conservatives and people that are for the president that they’re not interested in sharing their opinions readily,” he continued.

“These people are more hesitant to participate in polls. So, if you’re not compensating for this, you’re not going to get honest answers.”

Cahaly is not just any pollster. He’s one of the few in the business whose polling showed Trump leading Hillary Clinton in key battleground states, including Michigan and Pennsylvania, in 2016. Trump went on to shock the world by winning both states and the election.

I too believe the hidden Trump vote does exist, even among demographic groups that Republicans typically lose to Democrats. We’re seeing signs. For example, while it looks like older Black voters will vote overwhelmingly for Biden this year as they did for Clinton in 2016, Trump’s support among young Black voters (aged 18 to 44) has increased from around 10 percent in 2016 to 21 percent, according to UCLA Nationscape’s polling.

President Trump has also gained support among Latinos. In fact, UCLA Nationscape’s polling found that he’s attracting 35 percent of Hispanic voters under age 45 — compared to 22 percent who supported him in 2016, according to Cooperative Congressional Election Study data.

People often stop me on the street in liberal cities like New York and Los Angeles to say they’re supporting President Trump but can’t be vocal about it because they fear losing a job or even friends and family. Some of these people are Black and Latino. The only reason they tell me is because they know me from my podcast or my work on Fox News.

For instance, the Republican National Convention featured a number of Black men as speakers this year. And Politico talked with more than 20 Democratic strategists, lawmakers, pollsters and activists who explained that many Black and Latino men are open to supporting Trump as they think the Democratic Party has taken them for granted.

As a Black man, I agree that the Democratic Party has taken Black men for granted. In fact, Democrats have taken the entire Black community for granted. I even wrote a book on this issue titled, “Taken for Granted: How Conservatism Can Win Back the Americans That Liberalism Failed.”

Biden has a major problem if Trump is gaining support among certain minority demographics: If the president were to secure a noticeably higher percentage of the vote from these groups than the GOP typically wins — even if it’s much less than a majority — it would likely propel him to a second term.

On my podcast, Hegseth told me something that I’ve been saying for years: Polls don’t vote; people do. Don’t ignore the polls, but don’t put too much stock in them either.

There is a hidden Trump vote that too many pollsters aren’t taking into account. And these Americans, forced to hide their politics in the shadows, may very well give us another four years of President Trump.