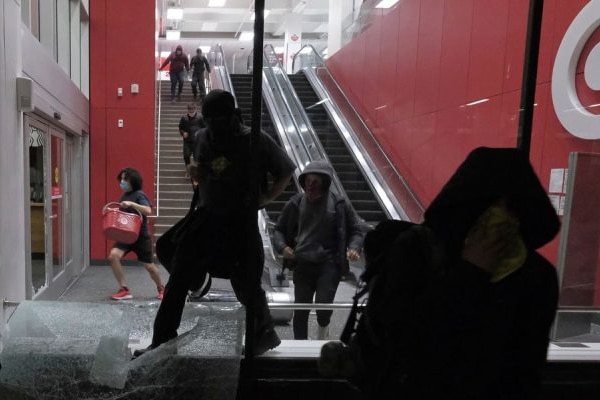 There is something obscene and repulsive about American businesses having to board up store windows on the eve of an election because they know their government cannot protect them from anti-American barbarians and thugs.

There is something unAmerican about mobs going into neighborhoods and restaurants and intimidating innocent citizens.

President Donald Trump should respond to the vicious, destructive, and lawless mob precisely as President Abraham Lincoln did.

Consider how deeply Lincoln understood the importance of enforcing the law and providing safety and order – and the obligation of the government to use force when necessary.

President Lincoln understood mob rule, and he hated it.  Lincoln believed in the obligation of government to take action to protect people and property from mob violence.

In Lincoln’s lyceum address of January 1838, titled On the Perpetuation of Our Political Institutions, he describes mobs as the enemy of law-abiding citizens. He also captures the exasperation of citizens when government does nothing to suppress the mobs:

“Having ever regarded Government as their deadliest bane, they make a jubilee of the suspension of its operations; and pray for nothing so much, as its total annihilation. While, on the other hand, good men, men who love tranquility, who desire to abide by the laws, and enjoy their benefits, who would gladly spill their blood in the defence of their country; seeing their property destroyed; their families insulted, and their lives endangered; their persons injured; and seeing nothing in prospect that forebodes a change for the better; become tired of, and disgusted with, a Government that offers them no protection; and are not much averse to a change in which they imagine they have nothing to lose. Thus, then, by the operation of this mobocratic spirit, which all must admit, is now abroad in the land, the strongest bulwark of any Government, and particularly of those constituted like ours, may effectually be broken down and destroyed  I mean the attachment of the People. Whenever this effect shall be produced among us; whenever the vicious portion of population shall be permitted to gather in bands of hundreds and thousands, and bum churches, ravage and rob provision stores, throw printing presses into rivers, shoot editors, and hang and burn obnoxious persons at pleasure, and with impunity; depend on it, this Government cannot last.”

In 1850, Lincoln wrote a “Fragment on Government,” which connected the protection of people and property from lawlessness with the government’s central existence:

“The legitimate object of government is ‘to do for the people what needs to be done, but which they can not, by individual effort, do at all, or do so well, for themselves.’”

“…But a far larger class of objects springs from the injustice of men. If one people will make war upon another, it is a necessity with that other to unite and cooperate for defense. Hence the military department. If some men will kill, or beat, or constrain others, or despoil them of property, by force, fraud, or noncompliance with contracts, it is a common object with peaceful and just men to prevent it. Hence the criminal and civil departments.”

Days after the Baltimore riots against Massachusetts and Pennsylvania militia on April 19, 1861, Lincoln replied to a delegation from Baltimore who insisted he should do nothing:

“You, gentlemen, come here to me and ask for peace on any terms, and yet have no word of condemnation for those who are making war on us. You express great horror of bloodshed, and yet would not lay a straw in the way of those who are organizing in Virginia and elsewhere to capture this city. The rebels attack Fort Sumter, and your citizens attack troops sent to the defense of the Government, and the lives and property in Washington, and yet you would have me break my oath and surrender the Government without a blow. There is no Washington in that no Jackson in that no manhood nor honor in that. …Keep your rowdies in Baltimore, and there will be no bloodshed. Go home and tell your people that if they will not attack us, we will not attack them; but if they do attack us, we will return it, and that severely.”

In Lincoln’s Special Message to Congress on July 4, 1861, he posed the necessity of calling out the “war powers” of the government to resist insurrection:

“It presents the question, whether discontented individuals, too few in numbers to control administration, according to organic law, in any case, can always, upon the pretences made in this case, or on any other pretences, or arbitrarily, without any pretence, break up their Government, and thus practically put an end to free government upon the earth. It forces us to ask: ‘Is there, in all republics, this inherent, and fatal weakness?’ ‘Must a government, of necessity, be too strong for the liberties of its own people, or too weak to maintain its own existence?’ So viewing the issue, no choice was left but to call out the war power of the Government; and so to resist force, employed for its destruction, by force, for its preservation.”

Lincoln explained the results of resisting the mob in Baltimore

“I distrust the wisdom if not the sincerity of friends, who would hold my hands while my enemies stab me. This appeal of professed friends has paralyzed me more in this struggle than any other one thing.”

In the spirit of President Lincoln, President Trump should issue the following warning to the violent and the lawless:

Every honest citizen will be asked to submit video of anyone they see engaged in violence, looting, and destruction.

Every business will be asked to share any pictures its security cameras produce of mobs and violence.

Every TV news show will be scrutinized to seek to identify the violent and the destructive.

Every policeman will be asked to use their phones to film every violent or destructive person they encounter.

The Justice Department and the Department of Homeland Security will be tasked with coordinating with state and local authorities to track down, arrest, and prosecute the violent, lawless, and criminal.

Those local authorities who refuse to cooperate will have all their federal funding suspended until they are replaced by the voters with people who are anti-criminal and anti-looting.

Like Lincoln, we are going to ensure “that this nation, under God, shall have a new birth of freedom – and that government of the people, by the people, for the people, shall not perish from the earth.”