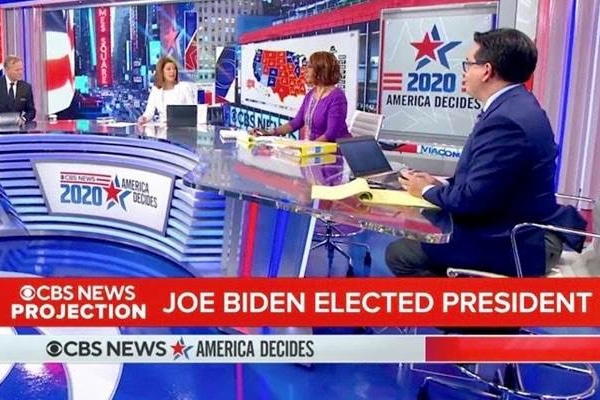 Before a single state had certified the election, the propaganda media coronated Joe Biden as President-Elect.

Before the vote counting had even finished, the media closed ranks and rallied around Biden.

Before lawsuits had even been filed in six different states – and long before they would be resolved in court – the anti-Trump media had rejected them sight unseen and created the drumbeat that Trump should concede. (Of course, this is the same media that had been 93 percent negative in its coverage of his administration.)

Before the various states held canvasses and validated their vote counts, the news media began to complain that President Trump was refusing to play his role and surrender.

Yet, these complaints, this rush to judgement, and the creation of a psychological lynch mob mentality all miss the key point about a presidential election – it is a constitutional process with a deliberate, determined sequence of events designed to protect the presidency from mob rule.

Federalist No. 68 explains the importance of an ordered sequence to take the passion of the mob and the manipulation of interest groups out of the presidential election process:

“the election of the President is pretty well guarded. … It was also peculiarly desirable to afford as little opportunity as possible to tumult and disorder. This evil was not least to be dreaded in the election of a magistrate, who was to have so important an agency in the administration of the government as the President of the United States. But the precautions which have been so happily concerted in the system under consideration, promise an effectual security against this mischief. …”

“Nothing was more to be desired than that every practicable obstacle should be opposed to cabal, intrigue, and corruption. These most deadly adversaries of republican government might naturally have been expected to make their approaches from more than one querter, but chiefly from the desire in foreign powers to gain an improper ascendant in our councils. How could they better gratify this, than by raising a creature of their own to the chief magistracy of the Union? But the convention have guarded against all danger of this sort, with the most provident and judicious attention. They have not made the appointment of the President to depend on any preexisting bodies of men, who might be tampered with beforehand to prostitute their votes; but they have referred it in the first instance to an immediate act of the people of America, to be exerted in the choice of persons for the temporary and sole purpose of making the appointment. And they have excluded from eligibility to this trust, all those who from situation might be suspected of too great devotion to the President in office. No senator, representative, or other person holding a place of trust or profit under the United States, can be of the numbers of the electors. Thus without corrupting the body of the people, the immediate agents in the election will at least enter upon the task free from any sinister bias.”

So, the Founding Fathers anticipated that each state would have an election and choose electors who would be protected from mob rule and from foreign manipulation. Remember: The Founding Fathers had lived through British and French efforts to manipulate the American political system and undermine America’s independence. They would not have been surprised at the danger of Russian and Chinese interference.

To achieve freedom from the mob, corrupting interests, and foreign influence, the authors of the US Constitution set up a system of checks and balances. First, they put control of the process in the hands of state legislatures. As the Constitution says: “Each State shall appoint, in such Manner as the Legislature thereof may direct, a Number of Electors.”

Note that the Constitution puts the power in the hands of the state legislature – not the state courts – and thus provides the legal basis for the legislatures in Georgia, Pennsylvania, Michigan, Wisconsin, Nevada, and Arizona to intervene and thoroughly investigate potential problems in their voting process – and determine whether fraud on a grand scale has been committed.

This power of the states is emphasized in Federalist No. 45:

“The State governments may be regarded as constituent and essential parts of the federal government; whilst the latter is nowise essential to the operation or organization of the former. Without the intervention of the State legislatures, the President of the United States cannot be elected at all. They must in all cases have a great share in his appointment, and will, perhaps, in most cases, of themselves determine it.”

The Constitution does reserve the power to set the election to the United States Congress: “The Congress may determine the Time of chusing the Electors, and the Day on which they shall give their Votes; which Day shall be the same throughout the United States.” (Read as a strict constitutionalist, this might pose a problem for all early voting – and extended voting. It is something which needs to be thoroughly explored.)

Finally, if no outcome is clear, the power reverts to the Congress to choose the president. The Federalist makes this clear:

“But as a majority of the votes might not always happen to centre in one man, and as it might be unsafe to permit less than a majority to be conclusive, it is provided that, in such a contingency, the House of Representatives shall select out of the candidates who shall have the five highest number of votes, the man who in their opinion may be best qualified for the office.”

When you look at the various steps the Founding Father created to ensure no presidential election could be corrupted or stolen, you can appreciate how far the propaganda media and its allies have gone in trying to rush the process and eliminate the constitutional system.

Every American should demand that their rights be protected by insisting on the constitutional process being followed.