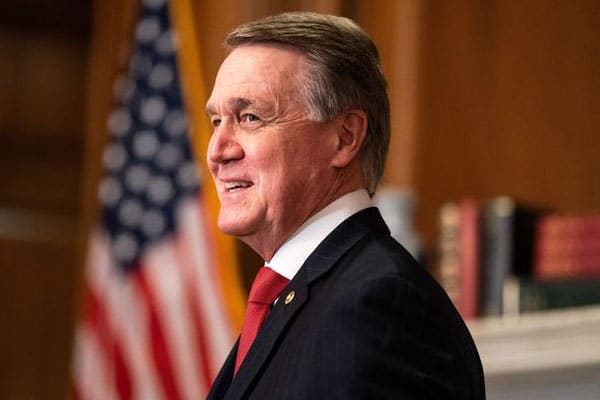 The two US Senate runoffs in Georgia are the most significant in American history.

I know of no other occasion in which the levers of power over the entire country have so hung in the balance than in these races.

The re-election of Sen. David Perdue and the election of Sen. Kelly Loeffler are absolutely essential for the preservation of America and the repudiation of radical efforts to change the fabric of our country.

A victory for Jon Ossoff and Raphael Warnock would be a victory for a much more radical America. If the Democrats win, San Francisco radical Vice President Kamala Harris could preside over the Senate as Senate President and would work cooperatively with new Senate Majority leader Chuck Schumer to help decisively change America.

As Senator Schumer said in New York, “Now we take Georgia then we change the world.”

Schumer will be under special pressure to change the world, because he is up for re-election in 2022 and Alexandria Ocasio-Cortez would clearly run against him in the primary if he failed to keep the true faith.

Schumer has already indicated he will go all out for the left. Just before the election Schumer said, “If we do elect a majority, and everything will be on the table. Nothing will be off the table.” When asked if he would eliminate the filibuster, he said, “As for the filibuster, I’m not busting my chops to become majority leader to do very little or nothing done. We are going to get a whole lot done. And as I’ve said, everything, everything is on the table.”

The Democrats know how thin their majority is, and they would like to pack the Senate. Schumer has vowed to make the District of Columbia and Puerto Rico states, bringing the Senate’s population up to 54 – and almost certainly granting Democrats four more members in the short term.

So, Democratic victory in the Georgia US Senate runoffs might lead to five or six new Democratic Senators dedicated to raising taxes and growing government.

If you consider the Democratic agenda of repealing the Trump tax cuts, raising additional taxes, and bailing out high-cost unionized bureaucracy-focused blue states of their multiple fiscal pension crises, a Democratic win in Georgia would cost the people of Georgia billions in higher taxes over the next decade.

Victories for Ossoff and Warnock would also mean the teachers’ union would be able to destroy charter schools. Undermining the Second Amendment would be high on the agenda, and taxpayers money would be used to pay for abortions – even in the ninth month.

Raphael Warnock is clearly the most radical Democratic Senate candidate in the entire country. In fact, Warnock is so radical it is amazing he got enough votes to get into the runoff. His radicalism is not just narrowly political. Warnock has a long pattern of identifying with radical causes and repudiating America as a civilization.

As Alana Goodman reported in The Washington Free Beacon, Cone made his views plain in his 1970 book A Black Theology of Liberation.

In this book, Warnock’s mentor says there should be a new “black theology” to “eradicate whiteness from society.

“‘There will be no peace in America until white people begin to hate their whiteness, asking from the depths of their being: ‘How can we become black?’’ Cone wrote.

“Warnock cited the work over a dozen times in the chapters and footnotes of his own 2013 book The Divided Mind of the Black Church.

“One of Cone’s central arguments is that whites worship a false ‘white God’ and follow an anti-Christian ‘white theology.’ In reality, he wrote, ‘God is black’ and ‘has nothing to do with the God worshiped in white churches.’

‘The white God is an idol created by racists, and we blacks must perform the iconoclastic task of smashing false idols,’ wrote Cone. ‘White religionists are not capable of perceiving the blackness of God, because their satanic whiteness is a denial of the very essence of divinity.’

“The book argued that the purpose of black theology is the ‘destruction of everything white.’”

Goodman ends her report on a chilling note by quoting Warnock’s mentor:

“We have reached our limit of tolerance, and if it means death with dignity, or life with humiliation, we choose the former. And if that is the choice, we will take out some honkies with us.”

With this background of intense bigotry, Warnock’s participation in welcoming Fidel Castro to the church he worked for, and his personal history of attacking the police and calling them “gangsters, bullies, and thugs,” he would clearly be the most radical member of the US Senate if he won.

Ossoff is different from Warnock. Where Warnock is a dedicated hardline anti-white, anti-police radical, Ossoff is an ambitious want-to-be-elite liberal politician, who came to fame narrowly losing a US House race despite massive financial support from Hollywood, Silicon Valley, and the national liberal movement.

Ossoff has accepted money from Al Jazeera and Richard Li, an extremely wealthy Chinese media mogul who has condemned the pro-Democracy movement in Hong Kong and sided with the Communist dictatorship in China.

He raked in an enormous amount of money for his losing House race ($23.6 million with just 14 percent from Georgia and the rest from California, New York and Massachusetts donors). This year, for the first round of the Senate race, he has accepted $32 million – again with most of it coming from outside Georgia.

Clearly, liberal donors across the country expect Ossoff to be a loyal vote no matter what radical or liberal bill Schumer brings up.

The contrasts between Loeffler and Warnock and Perdue and Ossoff could not be more decisive.

The impact of this election on America will be historic: Radicalism with Warnock and Ossoff – or defending American values, institutions, and traditions with Loeffler and Perdue.