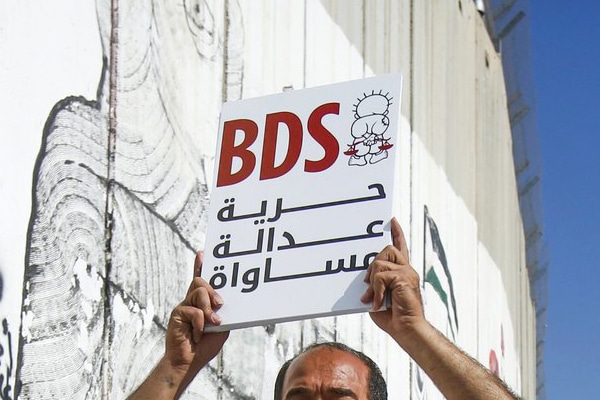 Any serious effort to combat antisemitism must confront the Boycott, Divestment, and Sanctions movement (BDS) against Israel. Which is why Secretary of State Mike Pompeo’s announcement Thursday that the State Department will formally designate BDS as antisemitic is so crucial.

“We will immediately take steps to identify organizations that engage in hateful BDS conduct and withdraw US government support for such groups,” Pompeo said during a trip to Israel. “We want to stand with all other nations that recognize the BDS movement for the cancer that it is. And we’re committed to combating it.”

Naturally, prominent organizations — such as Human Rights Watch and Amnesty International, among others — lambasted the pronouncement, saying it endangers human rights and undermines the fight against antisemitism.

In reality, the Trump administration’s new policy is a victory against antisemitism — and against hypocrisy.

Around the world, ruthless regimes are committing atrocities, violating human rights in the most egregious ways. In China, the ruling Communist Party is eradicating an entire culture, brainwashing and brutalizing some 1 million Uyghur Muslims in concentration camps. In Iran, the regime continues to execute innocent protesters and crush all dissent against theocratic rule.

And yet, there is no organized, transnational movement championed by Western activists, journalists, academics, entertainers, and politicians to boycott, divest from, and sanction China or Iran. In fact, there is no such movement against a specific country anywhere in the world, except Israel.

That a vibrant, prosperous, and pluralistic democracy is singled out for such treatment when, by all relevant standards, numerous other countries are far more deserving should raise questions. For example, if there is no BDS against Syria, whose president has spent the last decade slaughtering hundreds of thousands of people and displacing millions more, then why is there one against Israel, where minorities enjoy equal rights and investors flock for exciting economic opportunities? Is it just coincidence that Israel is the world’s only Jewish state?

Of course not. Even the United Nations, which is notoriously biased against Israel, links BDS to antisemitism. Leading activists and organizations that support BDS routinely make antisemitic statements and promote antisemitic content. And 80 percent of American Jews view BDS as mostly antisemitic or having antisemitic supporters.

Jews are right to view BDS as a threat. BDS is a campaign of economic warfare meant to delegitimize and, ultimately, to abolish the Jewish state.

Consider the movement’s three stated aims: to end the occupation of “Palestine,” to achieve “full equality” for the Arab-Palestinian citizens of Israel, and to achieve the right of return of all Palestinian refugees to Israel.

The third objective, combined with the second, “equals the end of Israel as a Jewish state,” wrote Roger Cohen, a liberal critic of Israel.

Here’s why: The United Nations uniquely classifies Palestinians, and no other people, as refugees at birth — even if they never fled persecution. The right of return, therefore, would mean that not only all the Arabs who were displaced following Israel’s founding could settle in Israel but also all their descendants.

BDS seeks to flood Israel with these refugees, making Jews a minority and putting them at the mercy of Palestinians, many of whom reject the existence of Israel as the nation-state of the Jewish people.

The implications for Israeli Jews, who live in a region where most governments have shown no qualms about slaughtering Jews or watching others slaughter them, would be disastrous.

As Omar Barghouti, a prominent spokesman for BDS, explains, “If the refugees were to return, you would not have a two-state solution; you’d have a Palestine next to a Palestine.” He has also said that a return of refugees “would end Israel’s existence as a Jewish state.”

The second objective of BDS, meanwhile, seems laudable. But to supporters of BDS, it means forming a bi-national state that erases Israel’s Jewish character. (Not to mention that Israeli Arabs already enjoy the country’s full democratic rights.) Taken together, BDS’s second and third objectives create a clear, concrete roadmap to Israel’s demise — and to the end of Jewish sovereignty.

Even Norman Finkelstein, one of the West’s fiercest critics of Israel, has called BDS a “cult,” adding that the movement’s goal is to abolish the Jewish state.

In response, As’ad AbuKhalil, a professor of political science and prominent supporter of BDS, said, “Finkelstein rightly asks whether the real aim of BDS is to bring down the state of Israel. Here, I agree with him that it is. That should be stated as an unambiguous goal.”

If that doesn’t illustrate the point, listen to Barghouti. “Definitely, most definitely, we oppose a Jewish state in any part of Palestine,” he said in 2014.

Many supporters of BDS claim to be righteous activists seeking social justice for the Palestinians — and some are, duped by the movement’s leaders — but they are actually fighting a war that much of the Arab world and Jew-haters everywhere have been waging for generations.

Indeed, BDS is nothing new. Since the medieval period, Jews have continuously been the targets of antisemitic boycotts, which, historically, often preceded expulsions and physical attacks. The boycotts were meant in part to coerce Jews into acting against their own interests and to ostracize them from the rest of society.

In December 1937, for example, when the land of Israel was called Mandatory Palestine and under British administration, the Arab National Youth Organization, an extremist group, threatened to boycott Arab merchants who bought “Zionist goods from Palestine.” Even back then people used the words “Zionist” and “Jewish” interchangeably.

Such efforts were part of the Nazis’ well documented collaboration with Arabs to thwart the creation of a Jewish state.

Of course, the Arabs didn’t need the Nazis to launch anti-Jewish boycotts. In the 1920s and 1930s, Arabs throughout the Middle East boycotted the Jewish community in Mandatory Palestine on their own. These campaigns were designed to deter Jewish immigration and to prevent the creation of a Jewish state.

In 1945, the Arab League began its first collective boycott of Jews in Palestine. “The products of Palestinian Jews,” the league’s resolution stated, “are to be regarded as undesirable in Arab states. They should be boycotted and [use of them] prohibited, as long as their production in Palestine is liable to bring about the realization of the Zionist political goals.”

The following year, the boycott extended to “anything Jewish.”

Anti-Jewish boycotts continued after the establishment of the modern state of Israel in 1948. Many of these bans made no real distinction between Israeli and non-Israeli businesses. Jews were the targets. However, such thinly veiled antisemitism was accepted internationally, because it hid behind the façade of “criticizing Israel’s policies.”

BDS was simply the next phase of this evolution, becoming formalized and centralized during the 2000s.

With this history, we shouldn’t be surprised that BDS is now the main driver of antisemitism on college campuses, where the faculty are increasingly advocating and implementing the movement’s agenda. The adults entrusted with shaping the minds of American students are indoctrinating them to boycott — and revile — the Jewish state.

As universities try to entrench BDS among America’s future leaders, the movement is becoming a stronger force in American politics.

Last year, Reps. Ilhan Omar (D-MN) and Rashida Tlaib (D-MI) became the first two members of Congress to support BDS — and they’re adding to their ranks. The Democratic Socialists of America, of which Rep. Alexandria Ocasio-Cortez (D-NY) is a member, similarly backs BDS. Sen. Bernie Sanders chose supporters of BDS to join his presidential campaign. And while most members of Congress support legislation to counter BDS, progressive Democrats and several former 2020 Democratic presidential candidates oppose such measures, arguing — falsely — that they infringe on one’s right to free speech.

Add the media’s increased coverage of BDS, and it becomes clear the movement needs to be at the forefront of any national discussion on antisemitism.

In short, Pompeo is right: BDS is an antisemitic cancer. He deserves praise for saying so. And his decision to treat it as such is a huge win in the fight against antisemitism.