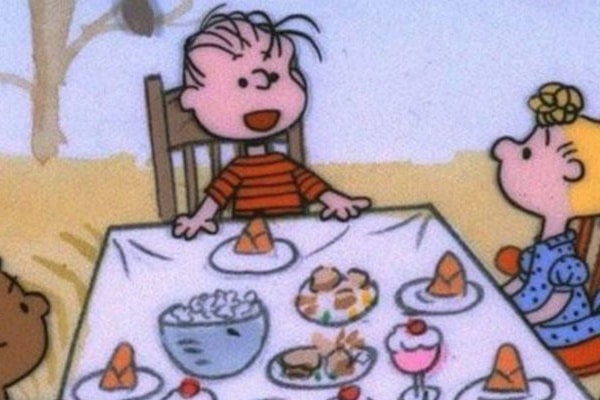 As satisfying as eating a second (or third) slice of warmed pecan pie with vanilla ice cream (and whipped cream), Thanksgiving movies and specials are like comfort food – especially this year when many of us will not be surrounded by family. Here is a guide to some of my holiday favorites, as well as some new binge–worthy new favorites.

Wednesday (Nov. 25)
This Holiday classic takes me right back to childhood. A Charlie Brown Thanksgiving– originally aired on Nov. 20, 1973 and won an Emmy the following year. It was the tenth animated television special based on the popular comic strip Peanuts, by Charles Schultz. The special is available for free on AppleTV+ from Nov. 25 – 27. No subscription needed.

Saturday (Nov. 28)
Robbie the Reindeer: Legend of the Lost Tribe - 8:30 p.m. ET on CBS
The Story of Santa Claus - 9 p.m. ET on CBS [vc_separator][vc_column_text]Other Great Movies and Shows You Can Watch Anytime

Thanks to streaming services, programming is available to watch anywhere at any time. Here are some of my favorite shows and movies to binge on over the holiday weekend.

One of my favorite programming genres to watch is historical fiction. I watch them from all around on the world. I just finished watching the fourth season of The Crown, which recently launched on Netflix. I have enjoyed each season. Season Four starts in the 80’s, so Princess Diana and Margaret Thatcher are two of the central characters. I personally do not like the one dimensional almost cartoonish way Prime Minister Thatcher is portrayed this season, but if you can look past that, it’s a great story. After you watch the series you can learn more about Princess Diana by watching the documentary Diana in Her Own Words, also on Netflix.

Sandra Bullock won an Oscar for her role in this biographical sports drama. Beautifully written and acted, it’s hard not to get choked up while watching Michael Oher — a homeless 17-year-old — have Thanksgiving dinner for the first time with the Tuohys, the family that takes him. It’s the turning point in the film. Available on Amazon Prime.

John Hughes wrote and directed this Thanksgiving classic starring Steve Martin and John Candy who are brilliant together. Funny and touching, the film offers a lesson we can embrace into our lives. Available on Amazon Prime.

A romantic comedy favorite. Though they may fall in love online, Kathleen Kelly (Meg Ryan) and Joe Fox (Tom Hanks) are rivals in real life — on the supermarket line, especially. You’ve Got Mail‘s iconic Thanksgiving grocery store scene, in which Joe steps in for a cashless Kathleen after she mistakenly rings up her items in a cash-only line, is classic. Available on for streaming on Amazon Prime, Hulu, or HBO Max.

The great Walter Matthau and Jack Lemon are two old neighbors who haven’t gotten along ever since they were children. Enter Ann Margret as a new neighbor and mutual love interest. Great storyline and one funny Thanksgiving scene. Available on Amazon Prime.

A Thanksgiving guilty pleasure. Some may think of Halloween as the right time to watch the Addams Family movies, but I love the Thanksgiving pageant scene in the film. A humorous and macabre take on the first Thanksgiving. Available on Netflix and Amazon Prime

For fans of director Barry Levinson, this is a classic movie and one of my top ten favorite films. The story is set in the ’40s and ’50s, eras of change, and its impact on family. Great Thanksgiving scene. Available on Amazon Prime and other streaming services.

While this story keeps being remade throughout the years, my favorite version is the 1947 film starring a young Natalie Wood and Edmund Gwenn.  Although many people think of the Miracle on 34th Street as a Christmas story, the film actually opens during the Macy’s Thanksgiving Parade. Available on many platforms including Amazon Prime and Public Domain Tube.

Also known as March of the Wooden Soldiers, this classic film is aired as an annual Thanksgiving family tradition in my home. The movie stars Laurel and Hardy. Early film making and special effects at its’ cheesy best. Will make you feel nostalgic. Available on many streaming platforms including PlutoTV for free and Amazon Prime for under $1.00.