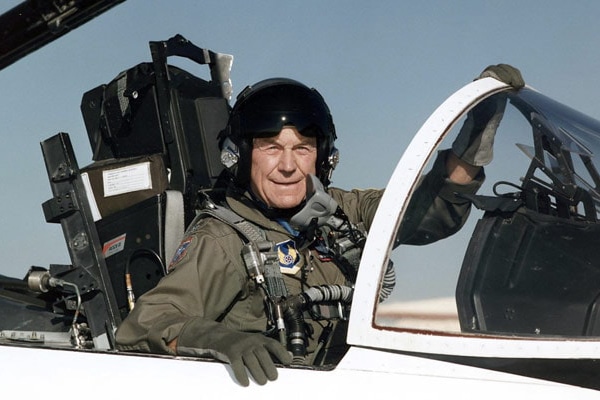 The death of Chuck Yeager at 97 is a good time to reflect on his remarkable life – and on the nature of American Exceptionalism at the individual level.

Yeager was much more than the test pilot who flew faster than sound for the first time.

Yeager was an American patriot who graduated from high school and joined the US Army at the beginning of World War II. He worked hard and became an enlisted pilot trainee and then ended up flying in three wars.

In World War II, Yeager was shot down and escaped from France into Spain (earning a Bronze Star for helping a fellow airman escape across the Pyrenees). After this heroic escape, he then appealed directly to Gen. Dwight Eisenhower – the Supreme Allied Commander and future President of the United States – for permission to go back into the war over Europe. Upon his return, he became an ace pilot, shooting down 11 1/2 planes (he shot one plane down with another American airman). There is one report in which Yeager shot down five enemy aircraft in one day on his way to becoming an ace.

After World War II, he became a test pilot – which is arguably as dangerous as flying in war. But when war broke out in Korea and Vietnam, Yeager took to the skies and fought.

In his career, Yeager went from high school to brigadier general. He was a product of an America which rewarded achievements over diplomas. Sadly, even in his lifetime this tradition was waning. When the astronaut program came along, Yeager was not eligible because he was not a college graduate. He could train them – but he couldn’t be them. By the 1960s, the triumph of academics over achievement was already beginning.

As an example of Yeager’s toughness and determination, the day he broke the sound barrier he was flying with broken ribs from a fall several days earlier. He had gone to a civilian doctor to avoid being grounded by the military. He was in such pain he could not close the hatch of the experimental jet (the Bell X-1) without help. A more timid person would have reported in unfit, and someone else would have broken the record. Somehow it is fitting that this high school educated West Virginian should be remembered forever as the first man to fly faster than the speed of sound.

Yeager should be an inspiration to younger Americans. If you have the courage and the determination, you can accomplish many things – and you can have an amazing life doing it. Yeager exemplifies American Exceptionalism at the individual citizen level. We all owe him a lifetime of gratitude for his lifetime of service and courage on behalf of our country.