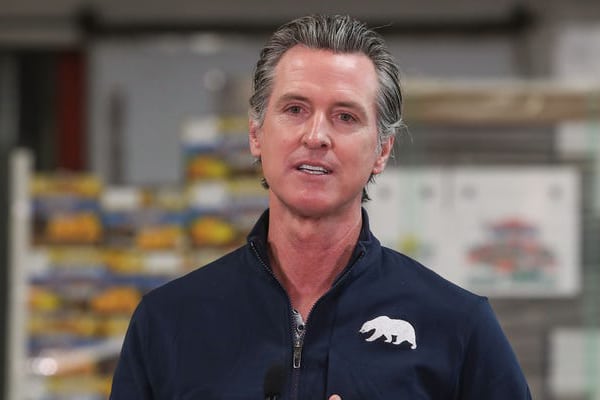 Censuses show that more and more Californians are leaving the once golden state, opting to move to states with lower taxes, no sanctuary cities, and less progressivism in general. Even a state where local governments do not buy drugs and alcohol for the homeless population or use taxpayer dollars to “mistakenly” pay unemployment for 21,000 convicted murderers would be a nice change for most Californians.

Once Californians learn that it is not normal to be stepping over human feces when walking around in San Francisco or seeing piles of needles and syringes at intersections wherever they go, they can’t leave fast enough. The decline of California has been occurring for many years now, but the election of Gov. Gavin Newsom has accelerated the decay of the once thriving state. Here are a few examples of what has happened in California since Gov. Newsom was elected:

Newsom’s high taxes are forcing out Silicon Valley businesses and the revenue, employment, and opportunities they bring to the state. The Silicon Valley contributes $275 billion to the national GDP and makes up a large part of California’s wealth. Newsom proposed a tax bill this past August that would hike California’s tax rate on income over $1 million from 13.3 percent to 14.3 percent. California’s highest tax rate, which Silicon Valley companies would pay, would be 16.8 percent.

Faced with the prospect of a 16.8 percent state income tax, Oracle, Hewlett Packard Enterprise, Charles Schwab, and Tesla fled California and moved their headquarters to Texas, which has no state income tax. The innovation, opportunity, and revenue Silicon Valley companies have brought to the state of California are leaving because major companies cannot function under Newsom’s impossibly high tax rates. Newsom will not suffer from the loss of these businesses, but Californians will – and are already starting to.

Newsom’s implementation of state-funded sanctuary cities, progressive environmental policies, and high taxes leading to the loss of business has led to harsh economic realities. Last year, California, which has the 5th largest economy in the world, was unable to fund $1 trillion of pension liabilities. In total, paying off California’s debt would require taxes of $33,000 per resident and $74,000 per taxpayer, as well as the additional federal taxes. Shockingly enough, these statistics are pre-COVID-19 under Newsom. Imagine how bad California’s debt is now.

Gov. Newsom has implemented strict stay at home orders during the pandemic. While closing the state may not seem like a bad option since California’s COVID-19 cases are spiking, Gov. Newsom seems to be picking and choosing which business remain open – opting to keep big, corporate chains open and running, while closing a majority of the 3.9 million small businesses in California that make up 99.8 percent of the state’s businesses. He and the state have even threatened to revoke the alcohol licenses of small restaurants and businesses that stay open as punishment for the small businesses who have already suffered enough. Gov. Newsom is not God, and he should not be able to pick and choose what businesses will suffer and never reopen, especially without showing the science that proves these small businesses are worsening the spread of the virus.

People all around the country are facing COVID-19 challenges. What makes Newsom’s betrayal so apparent to Californians is the fact that he has not followed any of his own regulations. Newsom disallowed public schools from opening, causing thousands of children to learn (poorly) online while he sent his children to private, in-person schooling. Newsom forced small businesses to close while his winery stayed open (it closed for the first time during the pandemic three weeks ago). Newsom implemented strict regulations that Californians could not sing, gather in groups larger than 10, or be indoors during the holidays. He also encouraged neighbors to tell on one another, while he attended a friend’s indoor birthday party.

Gov. Newsom thinks he is too good for his own rules, and his hypocrisy cannot stand. He has watched Californians suffer during the pandemic but is not willing to suffer himself. No public official should put Americans through what he or she is not also willing to go through.

There are plenty of other examples of harmful policies Gov. Newsom has implemented in California, and you can read them at https://recallgavin2020.com/. If California has any chance of once again reaching the beauty and promise it once held, Gov. Newsom must be recalled.

Unfortunately, Gov. Newsom is not just California’s problem. These past four years, we have seen the rise of the San Francisco Democrat: House Speaker Nancy Pelosi, Vice-President Elect Kamala Harris, and Gov. Newsom. These prominent figures have secured nation-wide influence for their home city and are grabbing for even more.

It’s truly concerning how much power we have given the people and city that has a regularly updated poop map. There are already theories that Gov. Newsom is next on the list of San Francisco Democrats to make a grab for the country. Newsom recently hired Dee Dee Myers, former President Bill Clinton’s press secretary, for his own campaign team. Myers is known for being the woman who helped Clinton get elected, so if Newsom wanted to run for a national position, such as president or even become Harris’s VP pick, Myers would be the right woman to have on his team. The idea of Newsom, who has brought ruin to California, having national power should scare you.

Gov. Newsom must be held accountable for what he has done to California. Even if you do not live in California, you must call friends, relatives, and acquaintances who do to sign the petition to recall Gov. Newsom.

If that is not possible, it is important to remember the downfall of California under Gov. Newsom when he makes his play for bigger, more national power in 2024, and fight to stop this country from being run the same way San Francisco and California are.

On Sale in The Gingrich 360 Store: