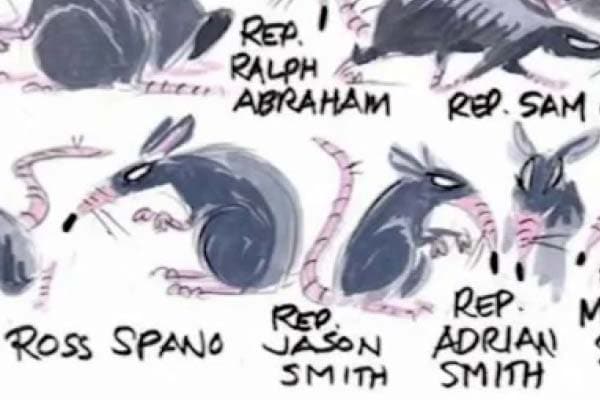 The Washington Post shows just how divided we are after using Nazi-like images depicting Republicans as rats.

Maybe the most sobering thing I have seen since the election is The Washington Post cartoon portraying Republicans, as rats, as experts on genocide at the Simon Wiesenthal center pointed out in a angry note to the Post. This is directly out of De Stürmer, which was the Nazi publication in the twenties and thirties and is the kind of thing the Nazis used to dehumanize people all this talk about how we should get together; we should unify, we should put aside differences. And then those of us, 74 million people find ourselves portrayed as rats, dehumanizing us, which has consistently been the first stage towards a genocide. And I’m not suggesting anything like that, except to say that it tells you how deeply bitterly, angrily, anti-us, the left is. And so every time they start telling you that you have an obligation to somehow forget everything joined together, be part of unity. Just remember these are the people whose allies portray you as a rat. And they mean it. They believe it. These are people who think we’re not just incorrigible, but that we are somehow need to be re-educated in a Maoist kind of program. And I think it’s extraordinarily disturbing and it sort of shows you the hypocrisy of The Washington Post motto democracy dies in darkness. When in fact they’re the ones who are killing us with their darkness, both the darkness of censorship, and now darkness of the way they described their opponents. Truly an astonishing thing to have a paper, the size of the Washington post to the prestige of the Washington post allow the supporters who together are 74 million people, Americans to describe them in any way as rats. It’s just, I think a fundamentally real signal of how deep the divide is and how difficult it’s going to be to unify us, given this kind of attitude.