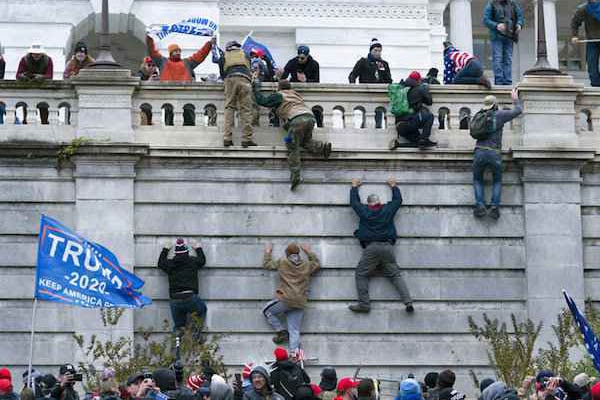 Americans should be committed to stopping all the violence.

As a former Speaker of the US House of Representatives and 20-year veteran of serving in that body, let me begin by condemning unequivocally and vehemently every person who illegally entered the Capitol. The trespassers and invaders should be tried and punished. Those who confronted the police should be charged with felonies.

There is no room in America for the kind of mob violence we saw yesterday. It is clear that there are 74 million-plus voters for President Donald Trump – and thousands of strong supporters who peacefully protested yesterday. They should not be tarred with the stain of the anti-American, unpatriotic minority who broke the law and assaulted the Capitol.

We have every right to condemn the violent minority while protecting the First Amendment rights of the vast majority.

I must take a moment to speak about the heroic, disciplined efforts of the US Capitol Police. When I was Speaker, we tragically lost Officer Jacob Chestnut and Det. John Gibson when a mentally ill man came into the building and killed them at the checkpoint. They were brave men who lost their lives defending the United States Capitol, the center of freedom.

We all saw the courage of the Capitol Police on June 14, 2017, when they protected Republican Whip Steve Scalise after he was shot and seriously injured by a leftwing activist. Two of the police, Officers David Bailey and Crystal Griner, were injured, while two other baseball players were also wounded.

Given this history, it was no surprise to me that the Capitol Police, even though severely outnumbered, stood up to the mob and minimized damage to people and property while avoiding the kind of reaction which could have ended more lives.

However, the real prize for courage yesterday went to Vice President Mike Pence. He had been the brunt of a number of public comments from President Trump trying to push him into doing something he did not think was constitutional. A weaker person might have buckled and given in.

I have known Mike Pence for a long time, going back to his first race for Congress in 1988 (he lost twice before finally winning in 2000, something I also had done). He is a deeply devout family man and believes passionately in serving his country and doing his duty. I knew that no matter what the pressures were, he would end up doing what he thought was right. Vice President Pence understood completely that he had sworn an oath to uphold the Constitution. He had not sworn an oath to a particular party, philosophy, or personality. I trusted him to study the issues carefully, consult widely with experts, pray deeply, and then do what he thought was his duty.

Vice President Pence’s leadership qualities came through when the Joint Session resumed after the rioters had been brought under control. What he said was so common sense and so calming in a potentially disastrous situation that I think it is worth sharing in its entirety:

“I want to thank the federal, state, and local law enforcement. The violence was quelled. The Capitol is secured, and the people’s work continues. We condemn the violence that took place here in the strongest possible terms. We grieve the loss of life in these hallowed halls, as well as the injuries suffered by those who defended our Capitol today. And we will always be grateful to the men and women who stayed at their posts to defend this historic place. To those who wreaked havoc in our Capitol today, you did not win. Violence never wins. Freedom wins, and this is still the people’s house.

With those two calming paragraphs, Vice President Pence got his colleagues back to work on the peaceful transfer of power under our Constitutional system.

Yesterday’s violence in the Capitol was horrible, and we have to condemn it – and every person who engaged in it. It was an assault on the basic framework of law which is at the heart of the American Constitutional Republic.

However, we must go a step further and make a firm commitment to stop all the violence.

There have been more than 200 days of Antifa-led violence in Portland, Oregon. It must stop.

There have been riots burning buildings, looting stores, and in some cases killing people in a number of other American cities. It must stop.

There is a new generation of radical prosecutors who want to protect guilty criminals and sacrifice innocent victims. It must stop.

There have been demonstrators going to the homes of public officials and trying to intimidate them and their families. It must stop.

There are real types of violence and threats of violence which are undermining the very fabric of our civilization. We need a deep and thorough examination of the depths of physical, social, and governmental pressures which have led tens of millions of Americans to fear for their future. My columns and podcasts will explore the threats Americans find themselves having to defend against. Every American – regardless of political leanings – must give this our full attention and effort, so we can end it.

If we don’t get a grip on stopping this radical violence throughout our society, our shared American future will become much worse.