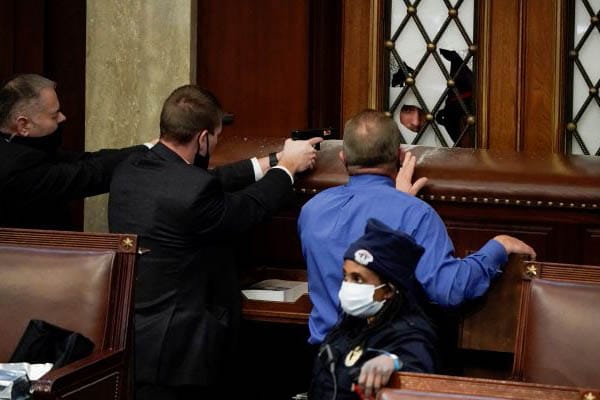 The storming of the Capitol on Wednesday was a national disgrace, but it’s been mischaracterized by much of the media and political elite.

America did not experience a failed coup, even though several pundits, journalists, and politicians have described the assault as one.

A coup is a sudden, violent attempt to overthrow an existing government. That’s not what happened.

President Trump didn’t order the violence. His political opponents weren’t arrested. His team didn’t orchestrate illegal schemes to stay in power. There were no tanks in the streets. Those storming the halls of Congress were mostly unarmed. And Congress resumed its regular business just hours after the insanity began.

Instead, we witnessed a largely spontaneous political riot carried out by a mob. Saying the rioters attempted a coup grants them undeserved seriousness and organization.

None of this should diminish how ugly and disgusting the assault was on the Capitol. But words matter. And more importantly, recognizing the true nature of what happened reveals a disturbing truth.

Yes, some of the rioters chanted about the 2020 election and “stopping the steal.” But what we saw for the most part in and around the Capitol was not a group seriously trying to overturn the election.

No, what we saw was much sadder: People looking for a fight, seeking destruction, enjoying the chaos, looting and bragging about it, and hoping to go viral on social media.

As the rioters entered through the doors that they forced open, many banged on the door lites (glass windows) for no reason whatsoever, leaving them horribly cracked. They ransacked congressional offices and posed for pictures. They looted the Capitol and boasted about it. And perhaps most tellingly, when the mob finally walked out, videos showed people yelling triumphantly, seeing themselves as victors.

They were the stars of their own drama. But at no point was there any sign of the rioters trying to do something concrete about the Electoral College. Victory was embracing the mayhem of the moment, not changing the outcome of the presidential election.

Indeed, the rioters were less interested in voter fraud than in breaking things and yelling. That’s what their actions showed.

In short, what we saw at the Capitol was nihilism. The mob didn’t believe in anything of substance to ground and guide them — certainly not conservative principles.

In this sense, the storming of the Capitol was reminiscent of the Antifa-Black Lives Matter riots of this past summer, in the wake of George Floyd’s heinous death in Minneapolis. Rioters toppled statues and desecrated monuments of abolitionists and those who fought against the Confederacy in the name of anti-racism. They were in the streets looking for destruction, not to advance a serious cause.

Still, the rioters this week shouted that the Capitol was “their house” and that they want “their country back.” As one of them said, “We are protesting for our freedom.” These sentiments stem from a warped view of freedom.

The rioters — and too many Americans across the political spectrum — seem to think freedom is a license to do what you want and nothing more. This comes from a nihilistic mindset in which no belief or cause or sense of the common good can trump an individual’s right to indulge him– or herself.

In reality, freedom is indistinguishable from responsibility. As the late British philosopher Roger Scruton, a staunch conservative, would say, real freedom “is a condition of self-discipline.” Indeed, real choices — and having choice is the essence of freedom — are “gestures for which you’re willing to take responsibility.” A person’s decisions don’t just concern that person alone; their reverberations are felt throughout society — and can degrade or strengthen a nation.

Too many people miss the part about accountability. But without it, freedom devolves into anarchy — and then likely authoritarianism.

So, yes, we as human beings have been endowed with the inalienable right of liberty — as the Declaration of Independence states. But a society, a culture, a nation cannot function on the basis of freedom simply being an invitation to do as one pleases. As the last line of the Declaration states, “We mutually pledge to each other our lives, our fortunes, and our sacred honor.”

We can and should talk about the political context of what happened at the Capitol on Wednesday — the president, the election, and all the rest. But there’s a troubling, corrosive nihilism running through American society that needs to be addressed. We must be able to look beyond our politics of the moment and understand some of the deeper forces ungirding the problems we’re facing.

The storming of the Capitol was disgusting. But the conversations we’re having in the days afterward aren’t penetrating enough to ensure something like it never happens again.