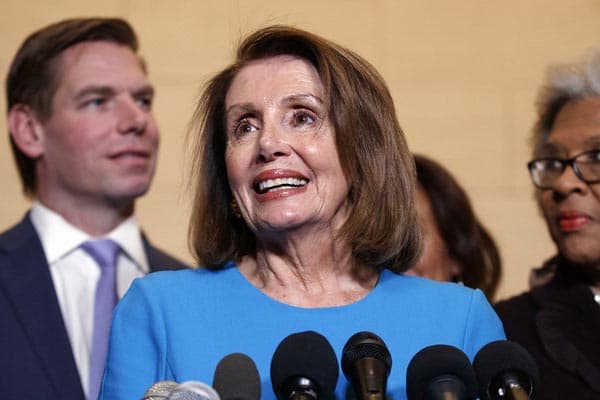 What is Nancy Pelosi trying to accomplish with her adamant desire to impeach President Trump? It makes no sense. All these upcoming important issues: delivering the vaccine, growing problems with China, Europe and Iran, people being fed up with social isolation, and any hopes for an economic recovery. It all falls on Joe Biden and the Democrats. Wouldn’t they be better off at least pretending to be bipartisan, or at least trying to reach out and form working groups that included some Republicans? Instead, they’re maximizing polarization and forgetting about the 74 million people who voted for Trump — of which at least 40 million are probably hardcore. I think this impeachment stunt is a dead end. It will get her nowhere and burn up time and energy that could be spent on more important matters. Finally, it will further polarize the country.

I find it a little harder. You understand exactly what Nancy Pelosi is trying to accomplish. Her adamant desire to impeach Trump really no sense unless you take into account how much he has frightened both physically with what happened at the Capitol where the people I’ve talked to really were scared for their lives and thought who knows what the mob would do. And also psychologically because he came so close to shattering their world and had he gotten reelected, he would have shattered their world. But for whatever reason, if I was faced as a former, Speaker of the House, thinking back to October, November, December, 1994. If I had been faced with the fact that in less than 10 days the mess of trying to deliver the vaccine is going to belong to Biden and the Democrats. The mess and the economy in going to belong to Biden and the Democrats. The extraordinary problems we’re going to have with China, with Europe, with Iran are all going to belong to Biden and the Democrats. The degree to which people are so totally fed up with being socially isolated and face governors who are so capricious and so arbitrary in their decisions that you can’t quite tell why one group is favored and another group is attacked. Why churches can’t meet, but you know Walmart can stay open. So you look at all of that and you think wouldn’t they be better off at least pretending to be bipartisan? Wouldn’t they be better off at least trying to reach out and form working groups that included some Republicans. When there are a bunch of governors who are eager to work with them. There are individual members of the house and Senate who would be glad to work with them, but instead they’re maximizing polarization.

And I think they’re forgetting that of the 74 million votes for Trump, probably 40 million at least are hardcore. And that means that that 40 million is not going to abandon Trump. They’re not going to abandon their principles. And what’s happening is they’re being hardened and reminded by Pelosi in particular of how much they hate Washington and how much they hate the Congress and how much they’re fed up with government bureaucracies. And just strikes me that in the long run if she’s at all concerned about the election in 2022 or Biden survival in 2024 this probably is a dead end. So I just offer that to, to you to think about, because I can tell you from my perspective, the level of viciousness, the desire, not just to impeach President Trump, but to impeach him with language, which would block him from ever running again is very strange and frankly could be self-defeating. I mean, if Trump decides that his future is for example, creating the competitor to Twitter, or creating a competitor, Facebook, here’s the resources and the allies and the capacity to do that. And they might find themselves with a more creative, more aggressive, and in many ways more effective Trump after all of their efforts here to somehow drive him out of politics and public life. Anyway, I just want to share that with you. I was, I was struck once again with Pelosi’s adamant and desire to go down this road. When I, I think there’s clearly a dead end. We’ll get her nowhere, but we’ll burn up time and energy and further polarized the country.