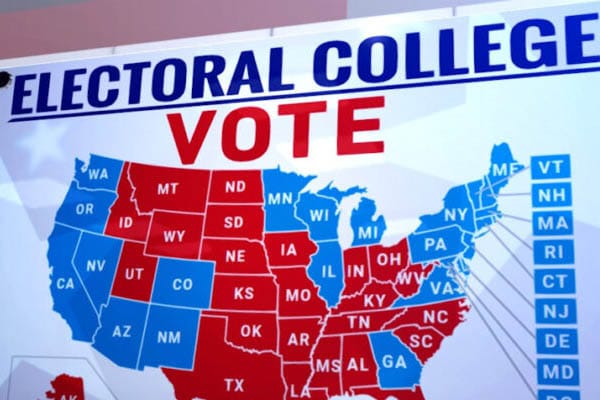 For those who are new to contemporary American politics, those on the Left have a ruthless edge to them. The Democratic Party is set to control all elected branches of the US government in a few days, but that has not stopped some veteran Democratic congressmen from trying to consolidate power further.

Rep. Steve Cohen (D-TN) and eight Democratic co-sponsors have introduced a bill in the House of Representatives to abolish the Electoral College and establish a direct popular vote system to elect the President and Vice President of the United States. The current system has yielded undivided Democratic rule in Washington, DC, but the mere possibility that the Electoral College could once again elect a Republican president is enough to convince Democrats to work to prevent that outcome. Even in a moment of total victory, Democrats strive to ensure they never lose again.

The bill itself is short, spanning four pages with a lengthy preamble, but its brevity does not make it any less terrifying on the merits. The bill begins with several preamble clauses arguing that the Electoral College is antiquated as people know candidates from outside their states much better now and vague platitudes about how American institutions need to get more democratic with time. The bill does not acknowledge the argument that the Founders intentionally refused a direct popular vote for president so as to prevent the tyranny of the majority. It is not in the best interests of a functioning constitutional republic to let urban population centers in California and New York to solely determine the election of the president. However, in the current Democratic playbook, virtually all means are justified as long as they accomplish the desired end.

There is good reason to believe that the elimination of the Electoral College would cement the Democrats’ hold on the presidency permanently. Each election cycle, the Democratic presidential nominee nets millions of votes from heavily populated, blue states like California and New York. On the other hand, Republican margins in traditionally red states such as Texas and Georgia have been dwindling due to a steady exodus of suburban voters from the party. Barring a cataclysmic political event that alters all demographic trends, it is possible that no Republican presidential candidates win the popular vote in the foreseeable future. Democrats understand this fact and are trying to use this to their advantage.

Aside from the major provisions concerning the abolition of the Electoral College, the bill also includes an equally troubling provision that would allow Congress to determine the manner in which elections are to be conducted and to decide which candidates can appear on a ballot for president. In state after state, Democrats have attempted to loosen voter identification requirements and ballot integrity laws. They have also tried to disqualify Green Party candidates from appearing on presidential ballots in battleground states so that the left-leaning vote does not get divided. The passage of this bill would allow a Democratic Congress to mandate these measures across all 50 states in the name of strengthening democracy. If anybody thinks that confidence in election officials is low now, imagine what it would be like when Nancy Pelosi and Chuck Schumer run elections across the country.

However, for the time being, panicking over the merits of this bill, or lack thereof, is futile. The bill contains provisions that amend the US Constitution and it would therefore require the support of two-thirds of both Houses of Congress to proceed. Hence, it is safe to assume that the sponsors of this legislation are not under any delusions regarding its prospects to become law. However, the bill will almost certainly provide fuel to a raging debate about our constitutional system and there is reason to believe that that is not a paltry achievement. When Rep. Alexandria Ocasio-Cortez (D-NY) proposed her Green New Deal legislation, she was roundly mocked by conservatives for putting forward a bill that would never pass Congress. Today, with President Joe Biden soon to be in office and Democrats controlling Congress, it is likely that some version of the Green New Deal will be implemented in the United States. Therefore, legislation that may seem impossible to pass now may set the framework of debate when political realities change tomorrow. While Rep. Cohen’s legislation will likely go nowhere in Congress, it is a warning shot for Republicans. It shows that, even when the Democratic Party has Republicans pinned to the floor, the Left has no intention of letting go.