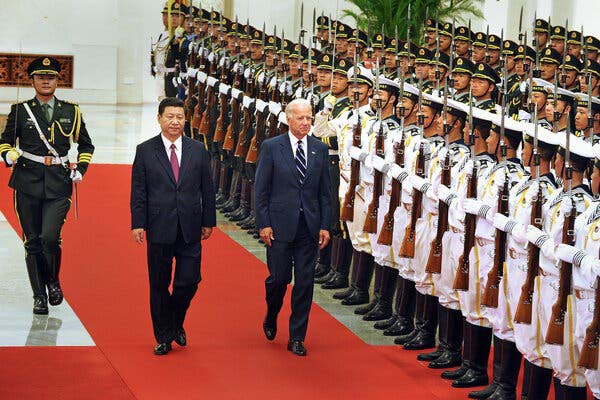 The day before President Donald Trump left office, Secretary of State Mike Pompeo issued one of the administration’s strongest foreign policy decisions – a declaration that the Chinese Communist Party is committing genocide in Xinjiang against Uyghurs and other minorities.

President Biden’s Secretary of State-designate Tony Blinken fully supported the Xinjiang designation and President Trump’s tough stance toward China. He recently told the Senate Foreign Relations Committee, “President Trump was right in taking a tougher approach to China.” He added, “I disagree very much with the way he went about it in a number of areas, but the basic principle was the right one.”

But the question is: Will President Biden actually be as tough against communist China as his predecessor?

Consider the Bidens’ business dealings in China, Ukraine, and Russia. President Biden blatantly lied when he denied knowing about his son’s business deals, as the mainstream media covered them up.

As one of Hunter Biden’s former business partners, Tony Bobulinski, said, “I’ve seen Vice President Biden saying he never talked to Hunter about his business.” Bobulinski added, “I’ve seen firsthand that that’s not true, because it wasn’t just Hunter’s business, they said they were putting the Biden family name and its legacy on the line.”

According to the Hollywood Reporter in December, Disney executive chairman Bob Iger, who was a top donor to the Biden campaign, is “at the top of President-elect Joe Biden’s wish list for a key ambassador post, namely China or the UK.”

Never mind that Disney also just came under fire for filming scenes of Mulan in Xinjiang.

Further, as Just the News reported, we still don’t know if the University of Pennsylvania’s Penn Biden Center has been the recipient of millions of dollars in anonymous funding from China. This question of influence at the Penn Biden Center is an important one to answer, considering that Tony Blinken was the managing director — and other alumni will join the administration as staff members in the National Security Council, State Department, and as deputy ambassador to the United Nations.

Throughout the campaign, President Biden touted that the US ought to work with China on global issues. To kickoff his multilateral approach to the issue of China, on day one in office, President Biden signed two executive orders to rejoin the Paris Agreement and the World Health Organization.

However, cooperation only works if you have trustworthy partners – and institutions that are effective.

Not only is the Paris Agreement a disaster for the US economy and American jobs, but the Chinese Communist Party has shown (time and time again) it selectively abides by the international rules, standards, and agreements that serve its interests.

Why would President Biden sign on to an agreement that hinders American strength and prosperity, as our totalitarian counterpart has invested billions to build coal plants around the world? Where’s a signal of good faith from communist China?

Communist China has most recently proven it is not a trustworthy international partner with the lies and cover-up at the beginning of the COVID-19 outbreak. The CCP continues to spread disinformation about the origins of the virus, now calling for a World Health Organization-led investigation of US military labs. This is troubling because when the world knew nothing about what we were about to face, the WHO merely parroted Chinese Communist Party propaganda about the virus, which costs lives and valuable time. Communist China celebrated President Biden’s decision to return to the WHO. Hua Chunying, China’s Foreign Ministry spokesperson said on Thursday, “We welcome the return of the United States to WHO and we are willing to strengthen cooperation with the United States and other countries.”

It remains to be seen how effective the Biden administration is in addressing the threats from communist China. President Biden may talk a big game about US-China policy, but we will see if his actions match his words.

And so it begins.

Claire Christensen is the Director of Research and Chinese Studies for Gingrich 360 and co-author of Trump vs. China: Facing America’s Greatest Threat.