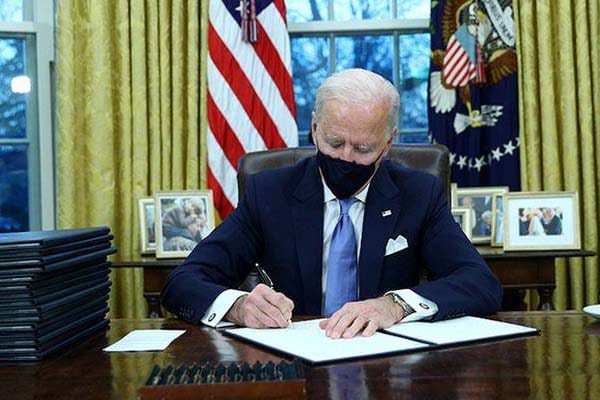 As I have watched the elite liberal media gush over the inauguration of President Joe Biden, I have waited for at least someone to analyze the fascinating difference between President Biden’s inaugural speech and his inaugural actions.

First, I thought the speech was incredibly well-given. The speech promised unity, togetherness, and finding common ground – it was a speech of classic American bipartisanship and civic goodwill. He promised to reach out to everyone, work with everyone, and be an American president, rather than a Democratic, partisan president.

It strongly reminded me of President Barack Obama’s first inaugural address. And, in fact, I had about the same takeaway for Biden’s speech as I did for Obama’s: If he leads the way he’s speaking – and acts as he says he will – he will split the Republican party and have a large, American governing majority for his entire presidency.

Of course, President Obama didn’t do this. He quickly went to the left, and promptly lost his majorities in the House and Senate. Based on President Biden’s first days, it seems he is following the same Obama playbook.

Hours after giving his excellent inaugural speech, President Biden went to the White House and signed 17 executive orders – including more than a dozen which totally contradict his pledge of bipartisanship, unity, and finding common ground.

Instead, he began the process of tearing down everything President Donald Trump did – erasing everything he achieved – no matter how it benefited Americans or how many Americans supported it.

We can start with immigration – over which the country has long been deeply split. President Biden immediately withdrew President Trump’s emergency declaration which was funding the wall and additional security at the Southern border. He did this at a time when – right now – there are 6,000 to 8,000 people in a caravan in Honduras heading to the United States with the intention of entering. Now, Democrats and the elite liberal media hate the idea of the border wall. But 77 percent of Republicans support it, according to a 2019 poll by Rasmussen Reports for the American Road & Transportation Builders Association and American Public Transportation Association. Where is the bipartisanship?

President Biden canceled his predecessor’s order to exclude people in the country illegally from the state-by-state tallies for determining the number of congressional and Electoral College seats. I have not found a poll on this specific question, but a July 2019 Hill-HarrisX poll found 55 percent of Americans supported adding a citizenship status question to the US Census – an issue still being heard by courts.

President Biden also withdrew President Trump’s orders which made it easier for law enforcement to deport people who were in the country illegally – including people who had broken laws unrelated to their immigration status. According to Pew Research, in November 2019, “The public is more closely divided on the importance of increasing deportations of unauthorized immigrants, with 54% saying this is a very or somewhat important goal and 45% saying it is not too or not at all important.”

Again, where is the common ground – or even the discussion?

In another example, President Biden said the US – with zero stated conditions – would rejoin the World Health Organization, which continues to be beholden to communist China and continues to lie about the origins of COVID-19 on the Chinese Communist Party’s behalf. According to Pew Research in November, 2020, 86 percent of Democrats trust the WHO, while only 27 percent believe the organization is reliable. Nevertheless, no conversation, consideration, or compromise from the Biden administration. America will take the left path.

President Biden’s decision to rejoin the Paris agreement on climate change was, of course, inevitable. Along partisan lines, 57 percent of Republicans oppose this, according to a November 2020 YouGov poll. Ironically, the Paris agreement has been more than met by the US. Because we’ve moved toward natural gas and away from coal, our carbon emissions are drastically lower than even before we joined the agreement under President Obama. No other country in the world has reduced its environmental impact as deeply as the United States. Now, this only matters if you care about reality more than symbolism.

President Biden also cancel the Keystone XL pipeline to move oil from Canada to the US. This was totally divisive. It was also a critical piece of President Trump’s plan to keep the US energy independent, but the left didn’t like the idea of the pipeline, so it’s out.

To quickly name a few more, President Biden ended President Trump’s travel ban on majority Muslim countries which lacked appropriate security. (Note: It was never a “Muslim ban” as the left asserted. Seven countries do not represent the entire Muslim world.) Further, why in the midst of a pandemic, would you lift any travel bans from unstable nations?

As a final example from the longer list (which I go into in more detail on my podcast) President Biden’s rescinding the 1776 commission goes to the heart of the argument over our nation’s identity. It is has become near-theology for the left to believe that America cannot be exceptional, and that people like George Washington and Thomas Jefferson must not be considered serious contributors to our history. The left believes every American should ascribe to The New York Times’ 1619 Project, which reframes all of American history around slavery and discredits virtually every person who had a hand in writing the US Constitution, the Declaration of Independence, or winning the American Revolution.

Now, none of this should be construed as a wish or desire that President Biden fail as our chief executive. Unless you are irrational, every American should want the American president to succeed. If the President doesn’t succeed, America gets in trouble.

This should be taken as a challenge to President Biden to make sure his actions match his words.

So far, I see him talking about unity and calling for all of us to work together, but I’m curious about who he thinks “us” really is.

JOIN TODAY to be a part of this special event and receive a BONUS GIFT. Click here to join Newt's Inner Circle.