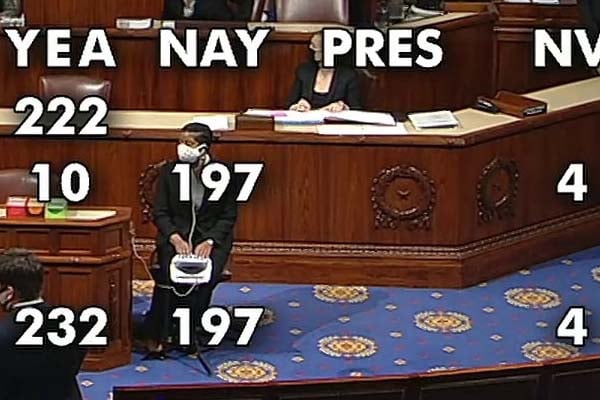 Donald Trump has been out of office for more than a week, but he has continued to stay relevant on Capitol Hill and call out lies Democrats have been feeding the nation.

After the Senate runoff in Georgia, Biden gave a bold promise of bipartisanship in all areas of government: “I’m also just as determined today as I was yesterday to try to work with people in both parties — at the federal, state, and local levels — to get big things done for our nation.”

Now, just a few weeks later, Democrats have abandoned all sentiments of bipartisanship during the impeachment trial of former President Trump, with a House vote of 232-197 to impeach. Only 10 Republicans joined the Democrats. The House had a widely partisan vote, but instead of shifting to a more bipartisan approach in the Senate, Democrats are attacking Trump and the Republican party, with more fervor than ever. They are hoping to permanently extinguish Republican influence in congress.

So far, Schumer is keeping to his promise of not letting McConnell, or Republicans, have a strong voice in Senate operations. On Tuesday, 45 Republican senators voted that the senate impeachment trial was unconstitutional, following former Harvard Law professor Alan Derschowitz’s legal advice that Trump is a public citizen now and cannot be tried as a president. Schumer and the Democrats are completely ignoring Republicans’ overwhelming objections to the trial, instead hoping to see their selfish desires of convicting Trump come to fruition. It seems that Democrats are not loyal to constitutional law, but to vindictive goals that solidify their power.

The House voted for impeachment in a partisan manner, and if the senate objections are any indication, the Senate will be just as divided along party lines on Feb. 9 when the trial starts.  Democratic House staffers are now sharpening the division further, circulating a letter calling for the Senate to convict Trump. The letter currently has no Republican staff signatures, making the letter yet another partisan area of contention.

If Democrats continue to push the impeachment issue with their current level of aggression, the trial will have negative repercussions on the government as a whole. In fact, the increased polarization (who knew it could get worse after Trump?) is already starting to happen.

In the midst of the impeachment insanity, longtime Sen. Rob Portman (R-Ohio) has announced he will not be seeking reelection next year. His reason? ”It has gotten harder and harder to break through the partisan gridlock and make progress on substantive policy.” Schumer and the Democrats are forcing out  common ground politicians by refusing to cooperate with Republicans, all over an impeachment that will most likely fall short of the votes required to convict. How is this bipartisan?

Yet, Biden has done nothing to condemn his party’s divisive actions driving impeachment. In fact, Biden seems to be encouraging the partisanship by saying the impeachment trial “has to happen” despite Republican objections. It seems that Biden forgot his promise to be an American president, not just a president of the left by abandoning the 74 million Americans who supported President Trump, 92 percent of whom do not want to see him impeached.

Democrats are frothing at the mouth with the prospect of forcing Trump out of public office forever through the impeachment trial. What the Democrats may not realize is that this impeachment trial is not showing the world how evil Donald Trump is — but instead how bogus their promises of unity and bipartisanship are.

As a nation, we are witnessing increasing partisanship in our leaders, and the middle-ground politicians are finding the conflict heated enough to leave. Biden and the Democrats’ promises of bipartisanship have proven to be baloney, and Republicans must remember that when going into negotiations. Democrats will not risk their own goals for the sake of cooperation, so Republicans should not expect them to.