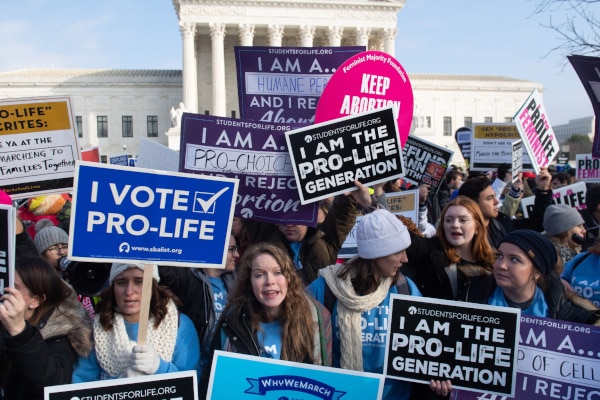 As Democrats prepare to implement their pro-abortion agenda, conservative GOP members are banding together in opposition. Led by Rep. Jim Banks of Indiana, 200 House Republicans have pledged to defend the Hyde Amendment in a letter sent to congressional leaders last Tuesday, the Daily Caller reports.

“[We] are sending a strong statement… We will not stand idle as radical Democrats work to end the ban on taxpayer-funded abortions.” The letter pledges a commitment to “vote against any government funding bill that eliminates or weakens the Hyde Amendment or other current law, pro-life appropriations provisions.”

The Hyde Amendment was first implemented in 1976 in response to the controversial Supreme Court ruling in Roe v. Wade. The budget amendment has guaranteed that no taxpayer funding be appropriated toward abortion services. While the amendment has carried significant bipartisan support each year since its initial passing, it has come under increasing fire from prominent Democrats, including both President Joe Biden and Vice President Kamala Harris, who have stated their intent to end the restriction.

According to the Daily Caller, the Hyde Amendment is just one of several pro-life policies the new Biden administration intends to dismantle. Dr. Anthony Fauci recently explained Biden’s plan to revoke the Mexico City Policy, a Reagan-era ban on federal funding for foreign abortion services that was reinstated by Trump in 2017. Additionally, both Biden and Harris have separately committed to codifying Roe v. Wade in law, though Republican opposition will likely make this impractical in the short-term.

Such a strong statement of resistance by House Republicans is an encouraging sign of solidarity amongst a minority party searching for its identity post-Trump. Though 200 votes are not enough for a majority, it shows the seriousness of the GOP in standing its ground against radical social policy—something that should hearten pro-lifers across the nation.

Read more about this story at the Daily Caller.